I find book design so fascinating because there are so many doors into a story. Goldfinger and Thunderball tie as my favorite Chopping cover for Ian Fleming. I love how the skeleton motif implies a thrilling experience without actually defining any specific characters or scenes. It’s just a dangerous vibe with sophistication. And even though I enjoy the abstraction of the later designs by Hawkey and the lurid ones by Pan and Fahey, only Chopping has captured this particular cocktail.

I mostly collected paperbacks as a kid because of price and because the covers were often immediately exciting to a youngster. Hardbacks seemed like adult books, heavy, and often without jackets at used bookshops. I collected heavily up through college and then I got off the track for many years. I wish I had stayed with it, because that would have been a perfect time to hunt down early works before they became too pricey. My collection now contains first editions of Colonel Sun and some later Bonds, Benson’s Man With the Red Tattoo, and Higson’s Young Bonds. I have a large collection of UK and US paperbacks, of course, and some early Japanese editions. But the editions I tend to collect more actively now are books about Fleming or Fleming’s non-Bond work. 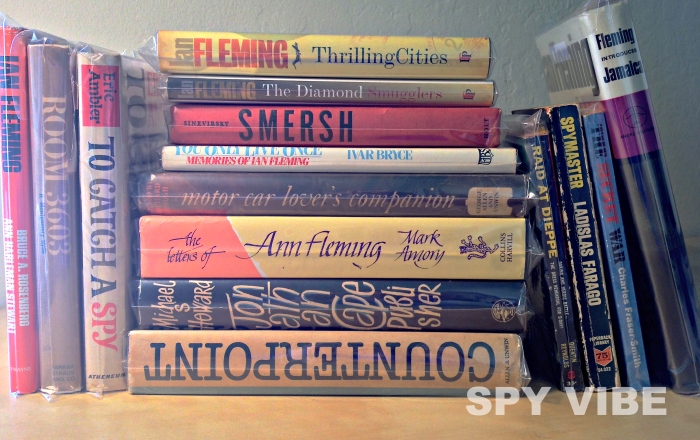 Some gems include early (sometimes first) work serialized in magazines, early collection catalogs, The London Magazine in the 1950s, Horizon in the 1940s, contributions to Room 3603, Counterpoint, Motor Car, To Catch a Spy, and Jonathan Cape Publisher. Books about Fleming, like Ivar Bryce, the memorial address, letters of Ann Fleming, and reference books like SMERSH. I was able to add a couple of rare Fleming appearances to Jon Gilbert’s Bibliography. I also collect the audiobook editions.

Now, of course, I’d love to add those early Bonds to my shelf. I had many FEL (first edition library) editions for a while, but decided I’d rather hold out for originals. I’m looking for deals on first UK and US HC editions. But what I really wish I could afford to collect are original Fleming letters, manuscripts, and proof editions. I think I would be happy with a curating job at the Lilly Library! 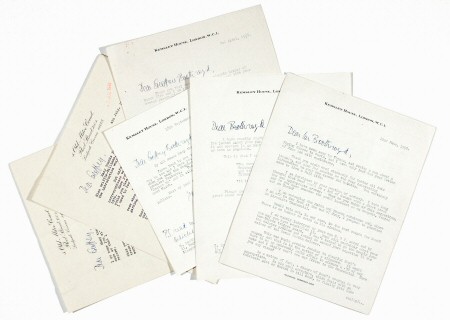 I started reading Ian Fleming when I was twelve- long before I saw any of the films. I can’t remember which title was first. I just remember that I suddenly spent my saturdays combing bookshops and I was constantly reading 007 (my routine hasn’t changed). Now that I’ve read them over and over, the titles I return to most often are For Your Eyes Only and Moonraker. I enjoy Moonraker for those sensual descriptions of food, action and mystery, and for Bond’s sweet affection for the heroine. From a View to Kill is a fantastic little mission and contains some of Fleming’s best lines (I collect odd editions of this short story, especially).

As an art teacher and editor, I tend to love many of the series-designs when viewed as a set- that’s the power of cohesive imagery. Hawkey’s modern minimal approach is fun and captures the vibe of the late Jet Age and early Space Age. The earlier Pan paperbacks really appeal to me with their painted covers and typeface. Growing up with the Signets in the US, the early Pan designs seemed more exciting and Pulp-like. The Hayakawa designs from Japan place Bond in the world of late-50s abstract art, and evoke an association with modern jazz album covers- though I bet the publisher used the same covers on many books of the period. One of the oddest books in my collection is a copy of Christopher Wood‘s James Bond and Moonraker once owned by John Entwistle of The Who.

Favorite hardcovers? Moonraker (Cape and Macmillan), Dr. No (Macmillon), Casino Royale (Macmillon)- the Macmillons for their ability to capture Jet Age/early Space Age mystery/adventure and to depict character without dictating the reader’s own vision. One of things I love about Chopping’s Octopussy and You Only Live Twice is that the designs just set the tone of exotic adventure and leave the rest to the reader’s imagination.

Thanks for your support of my SPY VIBE website and for the invitation to chat about Ian Fleming, Bond, and design!

Jason Whiton is the creator of Spy Vibe, a website devoted to 1960s design and pop culture that has seen nearly a million visitors. He is the editor of the book Mort Walker Conversations and author of the upcoming novel starring Japanese fashion model and spy, Miki Zero. Whiton has contributed as an artist and writer to Rolling Stone, USA Weekend, Arcana Comics, and other periodicals.

His screenplays and films have been recognized by the Nicholl Fellowships (Academy of Motion Picture Arts & Sciences), PBS, Sundance, and major festivals and museums. His most recent piece is an award-winning music re-mix and film for Yoko Ono.