Richard Chopping’s association with Bond author Ian Fleming began when he was exhibiting some Trompe L’Oeil works at a London gallery when his friend Francis Bacon showed Fleming’s wife around. The ensuing cover of From Russia with Love (1957) was similarly in Trompe L’Oeil style, the imagery of rose and dew drop being specified by Fleming, the Smith & Wesson revolver lent by the author. Fleming asked Geoffrey Boothroyd, a firearms expert, if he could lend his illustrator, Richard Chopping, one of his guns to be painted for the cover of From Russia, With Love.

Boothroyd lent Chopping a Smith & Wesson revolver that had the trigger guard removed for faster firing. 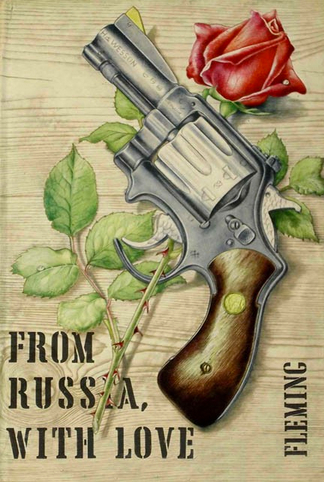 “Late summer is also the time when he and I get our heads together about the design of an appropriate jacket for the book. The volume I was working on at the time of my correspondence with Geoffrey Boothroyd was From Russia with Love, and, with the correspondence in mind and remembering the excellent trompe-l’oeil jacket for Raymond Chandler’s The Simple Art of Murder, published by Hamish Hamilton Ltd. in 1950, my idea for a jacket was a gun crossed with a rose. So I decided to approach Dickie Chopping, who is probably the finest trompe-l’oeil painter in the world and for whose work I have a great admiration.

Dickie Chopping having agreed in principle, the next requirement was a suitable gun. I at once thought of Geoffrey Boothroyd’s favourite—the S & W .38 Special M & P whose barrel he had sawn to 2 inches, and whose trigger guard he had cut away for quicker shooting, and I wrote asking for the loan of the gun.

Geoffrey Boothroyd agreed. His beautiful gun came down to me by registered post and was sent on to Dickie Chopping, who at once set to work, commenting in a letter around the middle of September,

“It has been the very devil to paint, but fascinating.”

And then fate stepped in via an urgent trunk call from Geoffrey Boothroyd. Boothroyd later had to assist the police with their enquiries when a similar weapon was used in a triple murder in Glasgow explaining that his weapon had been posted to Ian Fleming for a book cover. Peter Manuel was later arrested for the murder, convicted and executed.

Richard Chopping: “It has been the very devil to paint, but fascinating.” 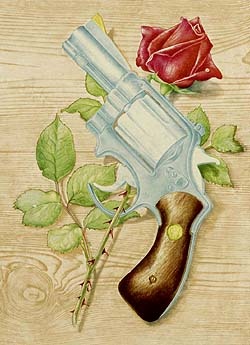 Original proof copy for From Russia With Love

His delicate renditions of flowers and guns seemed to perfectly capture the style of the novels and remain the definitive editions. Peter Selley, one of Sotherby’s experts, said:

“The proof copy is unusual in that it shows the progression and development of such a famous cover. It’s an important part of British literary history and dust jacket design itself.”

“The Chopping jacket was a tremendous success, both in England and America, and from that day on he and I and Michael Howard of Cape’s have devised all the James Bond jackets, which have now become something of a hallmark with the book trade and have earned prizes for Cape’s.”

After years of disappointment about his most famous commissions, Mr Chopping had no hesitation about putting the publisher’s proofs on the market when they surfaced unexpectedly at his home in Wivenhoe in Essex.

“I found them at the bottom of a drawer. What they are is progressive proofs, so there are sheets with different colours added, yellow, brown, red. This was before they used computers for printing.” 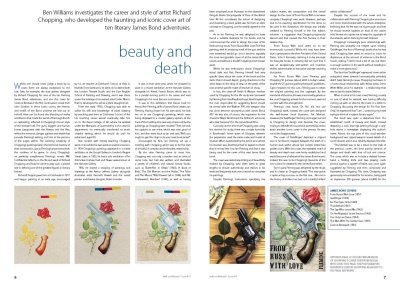 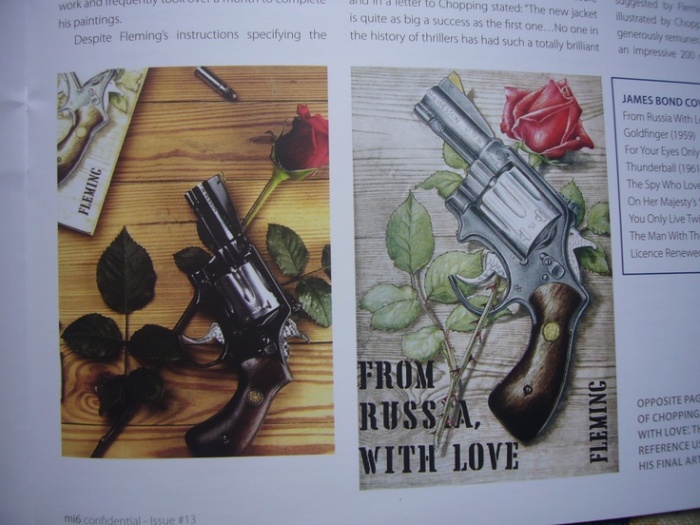 Original photo and final cover art for ‘From Russia With Love’

Although the first edition jacket announced that it had been designed by the author; Chopping later said:

“He in now way designed it. He did tell me the things he wanted on it. It had to be a rose with a drop of dew on it. There had to be a sawn-off Smith & Wesson. We never discussed the type of revolver we would use. It had to be that one.”

A fine first UK edition with fine dust jacket can fetch as much as $11,000 these days.

11 thoughts on “From Russia With Love Dust Jacket”