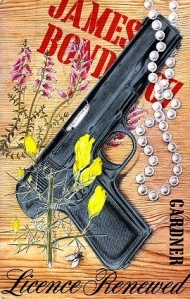 When the Fleming estate decided to resurrect Bond in 1981 with a new series of novels, Chopping was commissioned to paint the cover for British thriller writer John Gardner’s “Licence Renewed.” Chopping’s cover of a Browning 9 mm automatic, with pearls, flowers and—yes—a fly evokes several Fleming covers, most notably “From Russia, With Love.” Artists paying homage to Chopping’s style painted the covers for the next four Gardner books.

As this was to be the first new James Bond adventure since Kingsley Amis”Colonel Sun‘ in 1968, Jonathan Cape, the publishers, were keen to re-affirm in the minds of their readers that this was the classic James Bond returning to the page. Cape understood the fond association the public had with Chopping’s cover illustrations and Ian Fleming’s novels and so commissioned Chopping once again to design and illustrate the dust jacket.

The cover featured many of the traditionally associated elements of the previous James Bond novels: A gun, flowers and Chopping’s signature fly. The handgun featured is Bond’s own FN model 1903 from the novel, which replaces the Walther PPK, and the flowers are heather and wild iris, to indicate the Scottish setting. However, the composition is not as streamlined as his previous work, and appears cluttered in comparison to the simplicity of ‘From Russia With Love‘. 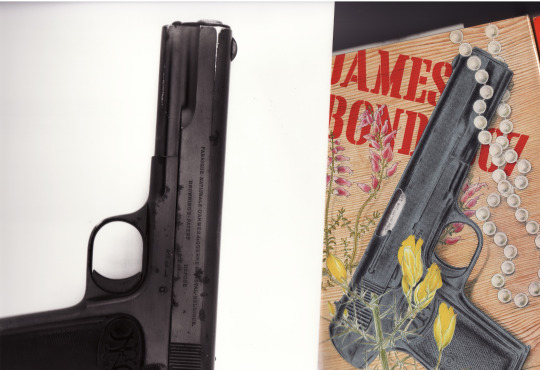 ‘License Renewed’ was to be the last of Chopping’s James Bond covers. In his later years, his eyesight had begun to fail him. He suffered from a detached retina, which ultimately caused him to give up painting all together.

Read Philip Larkin on Gardner, Amis, Fleming, and the “Batman from Blades”