Let’s say you want to recreate Bond experiences, and you have a lot of cash. Vegas may be the first place that comes to mind: the thrill of the roulette wheel, the beautiful women bringing you martinis, the sense of danger that comes with a lot of money tossed about casually in a smokey room.

While you are there, you will want to take in the flash decadence of a city built entirely in a desert by the Mob, but you won’t find Vegas much the way James Bond did. 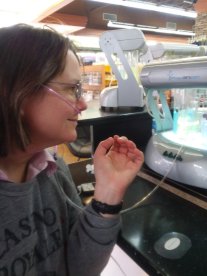 Accompanied by my thirteen-year-old daughter (who, because she has to come on all my research trips, is possibly the world’s youngest James Bond expert) I took a four day trip to Sin City in November of 2018. The first thing that happened when our plane landed was an assault on our senses. Yes, even in the airport, there are slot machines, flashy, noisy. You’d think it would be fun, but it was just loud. Joyless.

Slot machines, of course, take no skill but also do not give the player any benefit from repeated use. You can’t get better at them, as you can with 21. So, to entice people, the slot machines bear images of the things that people might feel a connection, such as television shows or movies. Yes, there were several James Bond slot machines.

We were delighted to see, at the airport and at several hotels, that we could, indeed, inhale pure oxygen as James Bond had in Diamonds Are Forever. Only now it comes in flavours!

You’ll remember in the book, that Bond took to Vegas to get to the bottom of the diamond smuggling, but also to get secretly paid by ABC (Spang) by means of the gambling tables.

Good luck with that exercise.

When Ian Fleming was writing Diamonds Are Forever, the United States still circulated currency in bills as high as one thousand dollars. These have been discontinued (their production was stopped in 1947 so even when Fleming was writing it was something of a lucky break to obtain them); even five hundred dollar bills are a thing of the past. So, if James needed a pay-off in cash, it would be in many hundred dollar bills – hardly a discreet handful with which to leave the casino!

Except, wait, the winner won’t get cash anyway. A dealer told me that anything one thousand dollars and above is paid by check so that taxes can be collected. So, these days, if James needed a cash pay-off he’d have to have long but low winning streaks all night — not a good way to go about undetected. 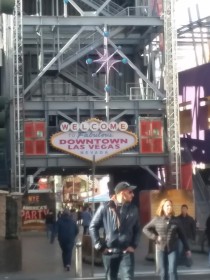 Maybe you don’t want to start with gambling, but instead with a walk to get the lay of the land. You can have a leisurely walk on The Strip, which is the casual name for Las Vegas Boulevard, where the most beautiful, modern and kitschy hotels are, and where the famed music scene of Vegas is. This is truly magnificent and not to be missed. But when I say “leisurely,” I am not kidding. You see, the traffic in Vegas, both foot and vehicular, is such that in order to cross the street, multiple pedestrian bridges have been built. Rather than crossing the street, a person must go up one set of stairs (or an escalator), cross the bridge and down another escalator or set of stairs. This, easily trebles or quadruples the time it should take to walk the length of the strip.

Speaking of food, one of the joys of travel is discovering the local cuisine. And drink, of course.  So the first thing I did after unpacking was to go to the bar and ask for a local drink. The bartender, unimpressed, told me it was all alcohol.

“But don’t you have a local brew?  A signature drink?  Something you impress people with?”

He shrugged. “It’s Vegas.  We don’t have a local food culture.”

The only things unusual about the drink he prepared were its size (immense) and cost (low).

No matter how neutral a person tries to be, your own experiences will colour your vision, and I just couldn’t believe, coming from the Northeast of the United States, that there was no local food. We have the apples and maple syrup of northern New York; Boston with its beans, clam chowder and brown bread— It was inconceivable that a city could not have food adapted to its area. Waiter after waiter told me that there was no local food culture unless you counted buffets. 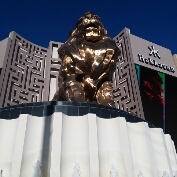 The Strip, once I accepted it for itself, had a tacky magnificence that can be awe-inspiring. The hotels are thematic, each like a cleaned up, abbreviated version of something else. A New York City minus the rats. A Paris without the brusqueness. Venice, with chlorinated canals. As an Art History graduate, I found the imitations good, but obviously, not meant to be taken seriously. The itsy bitsy Venetian canals, so clean and small, were positively precious. The hotel where we stayed, Excalibur, more closely resembled Moonracer’s castle from the Island of Misfit Toys than any real castle. However, Caesar’s Palace was notable to this Art Historian in that the statues were quite good.

All these hotels and restaurants were new construction, not a building standing that had been there when Ian visited.  Yet, the flashy falseness felt the same as his description of the city. My daughter and I had an unreal feeling, as we were walking the Strip, that we were in a movie as there were speakers next to the sidewalks for most of the strip played music that was at once upbeat and soothing, like an establishing shot in a happy movie. 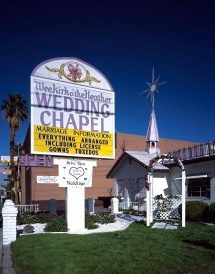 Founded in 1940, the Wee Kirk o’the Heather is the longest-running among dozens of marriage chapels in Las Vegas.

A cab driver recommended we leave The Strip and go to Fremont Street and Old Las Vegas. We were glad we did. We took the bus, which was clean and comfortable, and it deposited us a block away from the shop made famous in the reality show Pawn Stars. The store had a huge display, probably hundreds, of diamond engagement rings, which is either convenient because there are multiple little chapels a few blocks away for a quick wedding, or depressing because if the ring is pawned chances are pretty good the relationship didn’t work. (Which is interesting considering James Bond bought a used ring for his darling Tracy.) All the chapels are cute and charming, but I have a special love for the Wee Kirk o’ the Heather, mentioned by Fleming in Thrilling Cities.

It was a short walk—and in old Las Vegas, the walking is much easier than on the Strip – from Wee Kirk to the Mob Museum, which is, without a doubt, one of the finest historical museums it has ever been my pleasure to tour.  Well-researched, well-paced, with ample places to rest, not mincing words on who the bad and good guys were, and with a distillery in the cellar.

Ian would have been delighted or enraged to see the Mob Museum’s pride and joy: The wall from the St. Valentine’s Day Massacre, moved brick by brick to this interior location. The guide asked us to look for the bullet holes, and when someone in the crowd observed there were few in the bricks, she said proudly, “Most of them went into the people in front of the wall.” 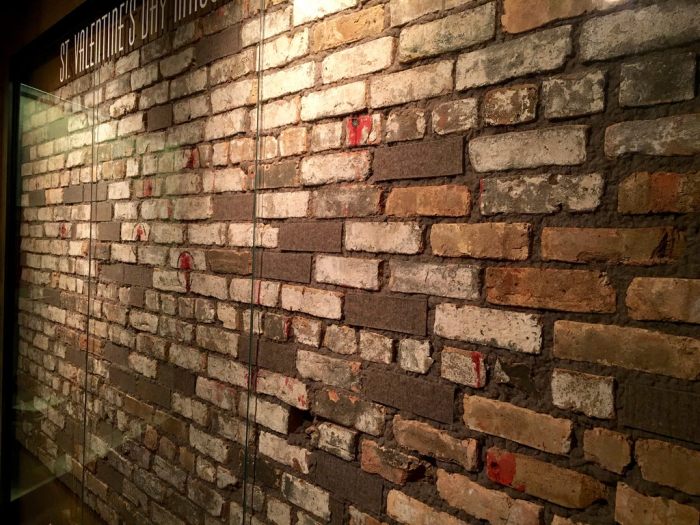 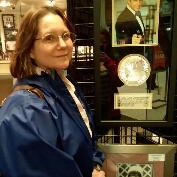 James Bond got a brief nod in a small exhibit, as did Rudy Guiliani, currently most famous for his connections to Donald Trump, but here a hero for his role in taking down the mob.

After the Mob Museum, we took a walk called The Fremont Experience, which is the old street, covered in a sparkly canopy, complete with zip line. Shopping, and food which Fleming probably would have called “indifferent” and people watching were the delights of the place. As darkness fell, costumed showgirls came out to pose for photos with the tourists, and a light show happened in the canopy. Vegas is famous now, less so in Fleming’s time, for it’s fabulous shows such as Cher, Penn and Teller and Cirque du Soleil—what to pick? We went to Blue Man Group, which was a musical and comic triumph. Also, one of the cast kissed me. 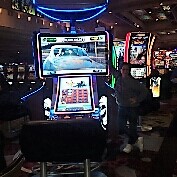 And what about the gambling? I do not travel in the kinds of circles Bond enjoyed, so my casino experiences were only those on the ground floor of the hotels I was in. The ground floor casinos had lovely women bringing drinks, but the dealers looked dressed for waiting tables at a nice restaurant rather than looking like they were helping people risk fortunes, and there was not a low cut gown among all the players. The slots were much as Fleming described them in Diamonds Are Forever, depressing.

But Blackjack, in the movies a torturously suspenseful past time, seems to be a fast game where hand signals were exchanged rather than sly glances, and everybody could add to twenty-one much faster than I can! As Ian said in Thrilling Cities, you have to know how much you are willing to lose, but also how much you are willing to win—that is, quit before you do anything stupid. 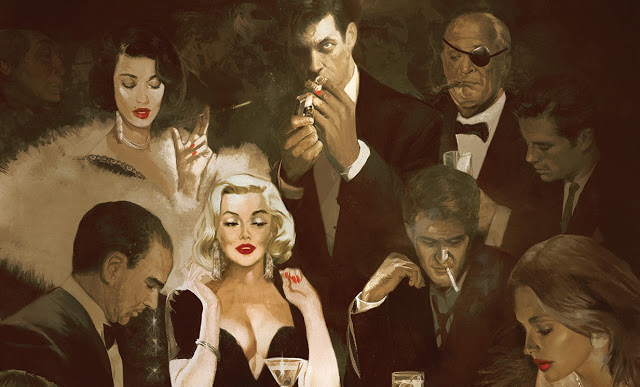 Vegas is a delightful, flashy, soulless adventure, nothing like Fleming described yet very much as he represented in the feeling. In conclusion, you won’t have much of a James Bond experience in Vegas, but you might have a lot of fun.