This week we caught up with Oliver Buckton, whose new book Espionage in British Fiction and Film Since 1900, explores the origins of the British spy story while keeping in focus the essential role of the “changing enemy”—the chief adversary of and threat to Britain and its allies—in the evolution of spy fiction and cinema.

Using an innovative structure, the chapters focus on specific categories of fictional spying (such as the accidental spy or the professional) and identify each type with a vital period in the evolution of the spy novel and film. A central section of the book considers how, with the creation of James Bond by Ian Fleming in the 1950s, the professional spy was launched on a new career of global popularity, enhanced by the Bond film franchise.

What do you think is Fleming’s most significant contribution to the spy/thriller genre?

In creating James Bond, Fleming brought the spy novel into the modern era. Although there are traces in his work of the influence of predecessors such as Buchan, Sapper, and Maugham, Bond is a significant upgrade of the professional spy in the post-war World. By making his hero a professional agent, Fleming involved the wider political spectrum in espionage adventure, and created the memorable relationship between Bond and “M” (based on Fleming’s own boss in Naval Intelligence, Admiral John Godfrey). Ultimately it was Fleming’s unique combination of elements that transformed the spy/thriller genre: Bond’s physical toughness but also his gentlemanly charm, his sexual promiscuity but also his personal discipline, his self-indulgence combined with his vulnerability. Another significant contribution is Fleming’s ability to create memorable villains: while Bond’s character remains fairly consistent across novels, the villains are unique, unforgettable, and larger-than-life. 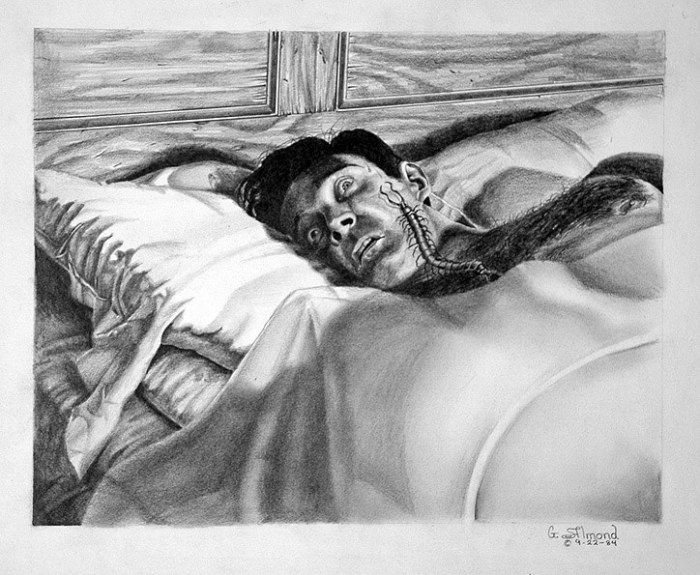 Dr. No – Illustration by George Almond (Courtesy of http://www.007magazine.com )

How political do you think his work was either overtly or subtly?

I think it would be hard to argue that Fleming is an overtly political writer—unless the very opposition between the British SIS and its Soviet counterpart, SMERSH, can be considered such. Yet the political framework of espionage is referenced by Bond’s role within a government organization (although of courses the existence of SIS was not officially acknowledged during Fleming’s career). However, Fleming’s work can be read as propagandizing for the Western system of democracy and consumerist lifestyle over the ruthless oppression of people living in the Soviet bloc. More specifically, Fleming adopts a pro-British stance by insisting that the SIS is superior to other intelligence organizations, such as the CIA. Bond as we know is always in charge of his missions, with the CIA’s Felix Leiter playing second fiddle. In this respect, I’d argue that Fleming’s work is political in asserting a continuing role for Britain in world affairs. 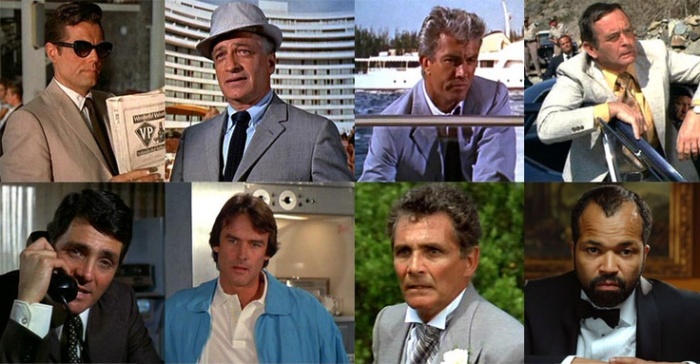 Would the real Felix Leiter please stand up?

Do you think that Fleming is unfairly judged within the context of the spy genre, in terms of use of trade-craft and how he portrayed the SIS?

John le Carré—whom many consider to be the master of the realistic spy story—has gone on record being dismissive of Bond as a professional spy. Bond has perhaps unfortunately been grouped with the “romantic” spy fiction of Buchan, Sapper, as opposed to the realistic tradition of Greene, Ambler, and le Carré.  Yet if read carefully, Fleming’s work is anything but romanticizing about the life of the professional agent, and Bond often has misgivings about the violence, ruthlessness, and duplicity required of him as a spy. On several occasions (such as in On Her Majesty’s Secret Service) he tries to leave the Secret Service because he feels the career is destroying him. Fleming’s novels are, I believe, more realistic than they are given credit for. Bond may not often display traditional tradecraft, and sometimes behaves more like an assassin than a spy. But he acts within the parameters of his missions, and is not a free agent. Fleming also portrays the SIS as a bureaucracy, which seems fairly realistic. 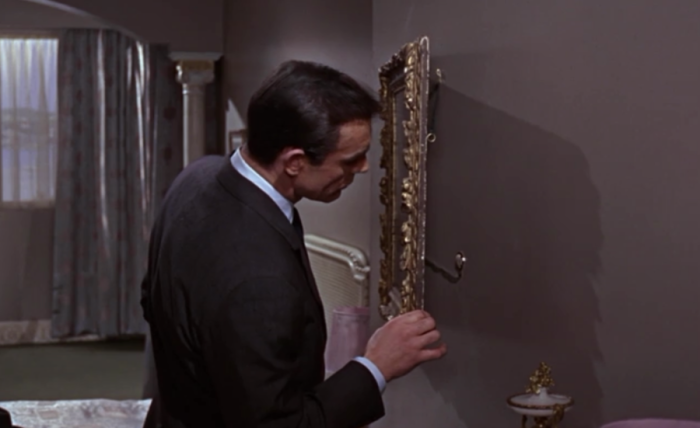 How did Fleming change the perception of sexuality in his novels from Bond’s treatment of women, the women themselves and his male friendships?

The introduction of sexuality into the world of the secret agent is one of Fleming’s main contributions to the genre. While Hannay’s Buchan functioned in a man’s world, Bond’s world is populated by glamorous, seductive, and complex women. The fact that Fleming’s female characters are complex is sometimes overlooked, due to the stereotype of the “Bond girl”—merely an object of sexual pleasure. However, in the first Bond novel, Casino Royale, Fleming introduces a female character (Vesper Lynd), who is not only physically beautiful but also intelligent and far more multi-layered than Bond realizes. Ultimately Bond is completely deceived by her skill as a double agent. Bond is sometimes accused of an adolescent type of sexuality, but Fleming makes clear Bond’s desire for a lasting relationship—even though he is unable to achieve this. This is not to dispute that women are often objectified as sexual objects in Fleming’s novels. However, women such as Vesper, Pussy Galore, and Tracy di Vicenzo, are far more than sex objects for Bond. 007’s bonds (pun intended!) with men are interesting because they strike the reader as more emotionally intimate than his relationships with women. Bond also admires the bodies and physical strength of male colleagues such as Darko Kerim in From Russia with Love. And I’d say that Bond’s relationship with M is arguably the most loving connection he has with anyone. Moreover M, we notice, disapproves of Bond’s pursuit of women. 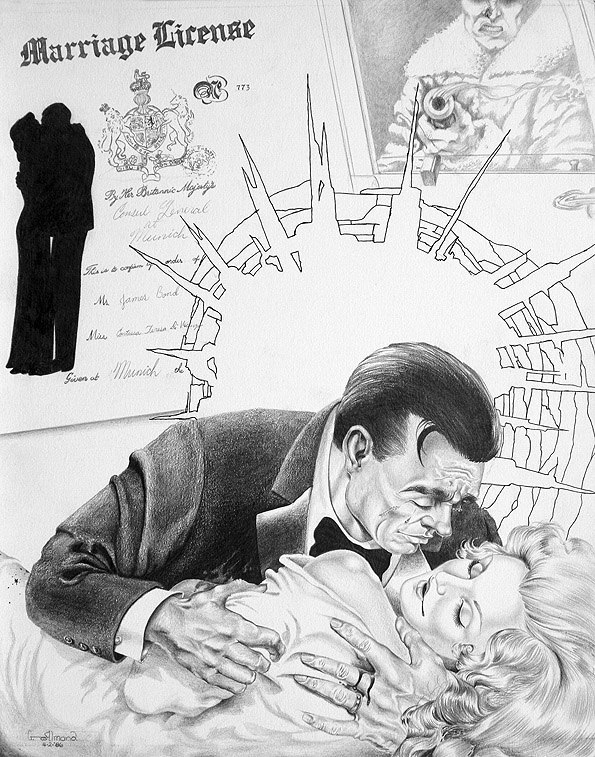 Do you have a favourite Bond novel and why? 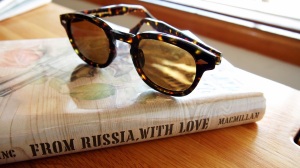 Image courtesy of The Teeritz Agenda

This has changed over time. My favourite for a long time was Goldfinger because of its brilliantly imagined villain, the introduction of the iconic Aston Martin, and the meticulous description of the golf match. It also has one of the most memorable female characters in Pussy Galore. Casino Royale ranks high because of the chilling detail with which Fleming describes the baccarat contest with Le Chiffre, as well as the poignant unraveling of Bond’s relationship with Vesper. However if pressed I would choose From Russia with Love as my favourite Bond novel. It shares some of the moral ambiguity familiar from the interwar novels of Ambler and Greene, while also demonstrating Bond’s skills as a professional spy as he tracks down the Spektor machine. The train journey on the Orient Express, as Bond plays cat-and-mouse with the psychopathic Donovan Grant is a wonderfully suspenseful piece of storytelling. There is also Fleming’s bold narrative decision to delay the appearance of Bond until the second section of the novel. Overall, I feel that the atmospheric European setting, the suspenseful narrative, and the memorable villains make From Russia with Love the best Bond. 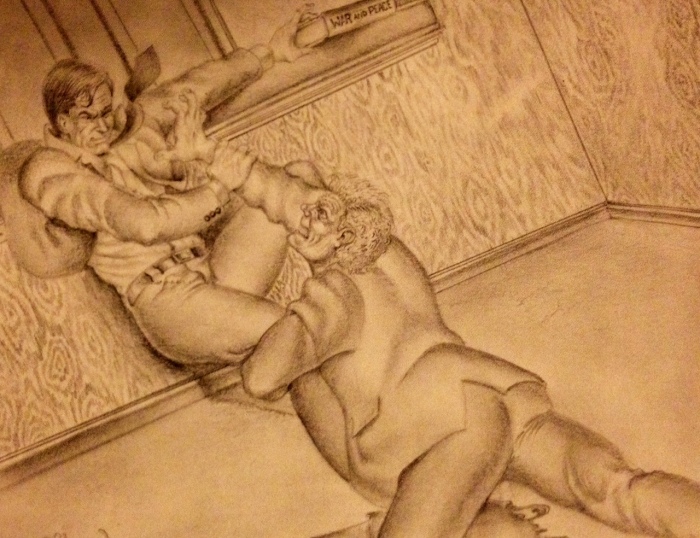 Fight on the Orient Express – Illustration by George Almond (Courtesy of http://www.007magazine.com)

Special 30% OFF discount offer!* – To get discount, use code LEX30AUTH15 when ordering

*May not be combined with other offers and discounts, valid until 8/31/16

Order Here and on Amazon