Richard Chopping was educated at Gresham’s in Holt, where Benjamin Britten and the future Cambridge spy Donald Maclean were his contemporaries. His artistic education came afterwards, at Cedric Morris’s East Anglian School of Painting and Drawing, where Lucian Freud was also studying. Chopping was more factotum than pupil but learnt by observing Morris work, although he claimed never to have grasped perspective.

Like Morris, he had a passion for nature, and his first commission was for Butterflies of Britain (1943). The job came through Morris’s friend Kathleen Hale, once Augustus John’s secretary but better known as the creator of Orlando the Marmalade Cat. She introduced Chopping to Noel Carrington, brother of the artist Dora Carrington and an editor at Puffin.

After his ‘Butterflies of Britain‘ for Puffin Picture Books they were so successful, Allen Lane, the publisher of both Puffin and Penguin Books, then gave him his head with the illustrations for the 22-volume British Wild Flowers.

There are a few very rare items out there which he had a hand in illustrating including an extraordinarily  ambitious and unfinished complete illustrated A-Z of Britain’s Flora. Frances Partridge (right), who, long before anyone had heard of a database, performed the enormous task of indexing the 24-volume complete works of Sigmund Freud.  With her, at the end of the second world war, Richard began a monumental multi-volume project for Penguin Books: an encyclopaedia of British wild flowers, she writing the text, he painting the illustrations. 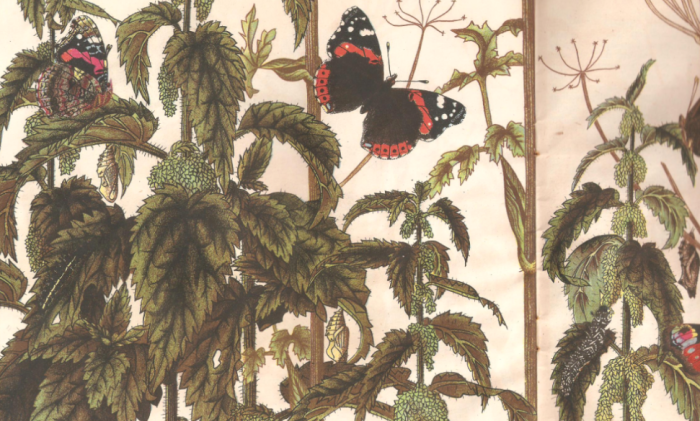 After seven years work for both Chopping and Partridge, the whole project was dropped due to the expense involved. It was perhaps Penguin’s greatest failure as the plug was pulled on it after realizing it would exceed 20 volumes. Richard (Dicky) only painted up to the “Cs”. I was told by his estate guardian that he sold off what art work he had produced in the galleries in the 1960s and had no examples of his paintings left when he died. If anyone today has these, they should know what they are sitting on.

Meanwhile, he continued to illustrate covers, such as for the 15th edition of the cultural miscellany The Saturday Book (1955). The features of the boy in the boater on the jacket of The Fourth of June (1962), David Benedictus’s novel about Eton, were Chopping’s own. Many of his paintings also bore his visual stamp, a bluebottle fly. Chopping also taught plant drawing at Colchester School of Art. From 1961 he worked for more than 20 years at the Royal College of Art, teaching ceramics and textiles to students who included Zandra Rhodes.