It’s no accident that the best novels often have the best villains, and in Ian Fleming’s canon, this is no different. They lay bare humanity’s worst traits and push Bond’s resourcefulness to the nth degree.

Only the greatest authors make the pulses of all of us beat faster, and they do this by marrying the atmosphere of suspense into horrible acts. Poe, Stevenson and M R. James used to frighten me most, and now Maugham, Ambler, Simenon, Chandler, and Graham Greene can still raise the fur on my back when they want to. Their heroes are credible and their villains terrify with a real “blackness.” – ‘Mudscape with Figures‘ by Ian Fleming, The Spectator: Aug. 5, 1955

Fleming’s villains are distinguished by a set of characteristics that, taken together, make them his own. They are usually physically grotesque, and Fleming’s fascination with physiognomy is all his own–hence the pupils entirely surrounded by white, the red hair, hearts on the wrong side of the body, pincer-hands, botched and successful plastic surgeries, yellow or red eyes, football heads, etc.

The chief villain of Moonraker Hugo Drax or Bond’s recurring nemesis Blofeld fit these characteristics. The name Drax could have been inspired by the British Admiral with the quadruple-barrelled name: Sir Reginald Plunkett-Ernie-Erle-Drax. Ian Fleming went to school with him. In real life, Sir Reginald Drax was considered an intellectual with controversial views at the time (according to a 1994 master’s thesis of Wilfred Laurier University), as of course did the Nazi Sir Hugo Drax. The name may also derive from the Great House on the north coast of Jamaica, named ”Drax Hall”. 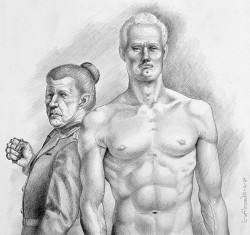 They are usually men of immense power and means and often belong to organizations arisen from the cold war, such as Smersh (a “real” organization that Fleming re-invented) or Spectre (one of Fleming’s most innovative concepts–a freelance terrorist group). They also tend to wine-and-dine Bond, thus enforcing the high-living feel of Bond’s world. Examples of these include Auric Goldfinger, Le Chiffre and Red Grant. And they are often twisted father (or mother) figures–as seen in the disturbing scene of LeChiffre lecturing Bond like a schoolboy while torturing him. That is uniquely Fleming.

Rosa Klebb has a love of pain, both inflicting and receiving, which suggests a self-portrait coming from Fleming’s own proclivities; but he makes her both short and bad at hygiene, perhaps in an attempt to distance himself from her? [A detailed look at the origins of Red Grant can be found here.]

Many of Fleming’s villains draw direct inspiration from real-world villainy. Le Chiffre is often mooted as drawn on Aleister Crowley, the famous Satanist. Auric Goldfinger has many namesakes from the real world. Erno Goldfinger was a modernist architect and distant relative of one of Ian’s golfing chums, whose architectural output Fleming detested.

Then there is Calouste Gulbenkian, dubbed ‘Mr 5%’, at one time the ‘richest man in the world.’ Fleming would have known much about Gulbenkian’s reputation while working at the merchant bank Cull & Co. in the 1930s whose largest client at the time was Gulbenkian. He even has a passing resemblance to Blofeld of the Bond films.

Then is also Mandel Goldfinger, who Michael Smith reveals in his book Anatomy of a Spy. He was a British agent in post-war Berlin who was, in fact, a spy organising a small-scale smuggling operation using German train crews that were ferrying machinery seized by the Soviets back to Russia. The Russians had blocked the movement of roubles abroad, leaving western intelligence agencies with no way of paying and funding the agents they were sending into the Soviet Union. With Germans desperate to sell anything of value to keep their families alive, there was a brisk trade in expensive western watches which well-to-do Russians were happy to buy for large numbers of roubles. Operation Junk used the smuggling operation to obtain large sums of roubles which the British used to fund their operations inside the Soviet Union for more than two decades until the operation was blown by George Blake, a KGB agent-in-place inside MI6.

Naturally, some of Fleming’s villains had their roots in fiction. His Doctor No character drew inspiration from Sax Rohmer’s villain Dr Fu Manchu, books Fleming had read and enjoyed in earlier years. Dr. No remains Fleming’s most intense fever-dream of a novel, reading more like an artefact of the lurid 1920s than the jet-setting 1950s. 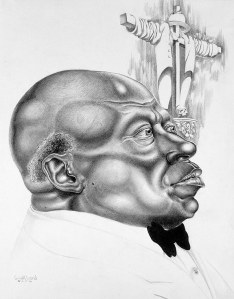 In Live and Let Die, Mr. Big is regarded by the superstitious residents of both Harlem and Jamaica as either the zombie of Baron Samedi or Baron Samedi himself. One of the chief Loa (or gods) of Haitian voodoo, Baron Samedi is the god of the dead. Therefore, Mr. Big’s intentional connection to Baron Samedi makes him all the more satanic. One cannot overstate the importance of Mr. Big in the James Bond canon. Of course, Fleming gleaned much of Mr. Big’s origins from gleans from Patrick Leigh Fermor’s travelogue The Traveller’s Tree, quoted at length in the novel. If nothing else, Mr. Big is the villain who first brings a sense of the weird and supernatural into the Bond novels, and subsequently, the Bond novels are almost defined by their instances of the outré.

Some of the villains from Fleming’s short stories proved no less effective, ranging from another former Nazi in “For Your Eyes Only”, Von Hammerstein – most likely based on the former chief of German army General Kurt Von Hammerstein. Although, he was famous for being an ardent opponent of Adolf Hitler and the Nazi regime. One of the most insidious and sadistic was Milton Krest from “The Hildebrand Rarity”. A domestic abuser and environmental terrorist of sorts. The name itself is said to come from a brand of tonic water and ginger beer that Fleming had during his stay in the Seychelles in 1958.

It is at school, that many names stick in the memory and one such name was Scaramanga. Fleming and George Scaramanga, the scion of a wealthy landowning family from Sussex, were fellow pupils at Eton in the 1920s but fell out, according to Dave Scaramanga, the latter’s grandson, who runs a taxi firm in Bath revealed to the Daily Telegraph in 2007- “I think it was just because they were very different,” said Dave. “My grandfather was a model student at school. He was quiet, well-behaved and studious – the complete opposite of Mr Fleming.”

According to The Daily Mail, it was Ian’s nephew Nichol who also crossed paths with older prefects Peter Scaramanga and John Blofeld at Sunningdale Prep School in Berkshire, with much more grief according to a former headmaster. Blofeld became a High Court judge and a Knight, while Peter really did follow a more villainous path.

After being expelled from Harrow School, he was arrested in 1959 at a suspected illegal gambling den playing baccarat and appeared in court in 1971 to plead guilty to fraud charges at the Old Bailey. It would have been quite something if the judge had been his old school chum Blofeld.

Not all of Fleming’s villains can be ascribed to other people and he may have been thinking of himself. Characters such as Major Dexter Smythe from the short story Octopussy come to mind, who suffered from alcoholism and accidie. John Griswold in Ian Fleming’s James Bond: Annotations and Chronologies for Ian Fleming’s Bond Stories noted that ‘before getting married to his wife, Mary Smythe (née Parnell), who had later deceased, he used to be a handsome man who had made easy sexual conquests all his military life.’

In a famous mutual interview with Raymond Chandler in 1958, Fleming remarked, “I don’t know if you do, but I find it extremely difficult to write about villains. Villains are extremely difficult people to put my finger on.” Yet despite this modesty, Fleming created some of the most memorable villains to this day.

Live and Let Die and the Supernatural Bond

Dr. Fu Manchu and Dr. No: More Than a Family Resemblance

One thought on “Master of Villainy – The Villains of Ian Fleming”