It’s a terrible thing, being a collector. You start off sensibly, with a few well-chosen items, then suddenly find yourself hoarding all kinds of tangentially-related tat.

So it was that I walked past the window of one of my local charity shops, spotted a Revell 1:24 scale Bentley 4,5L Blower model kit, thought “Oh, that’s Bond’s car”—then rushed back ten minutes later and bought it.

(Check out the catalogue number on the bottom left of the box, by the way. They know.) 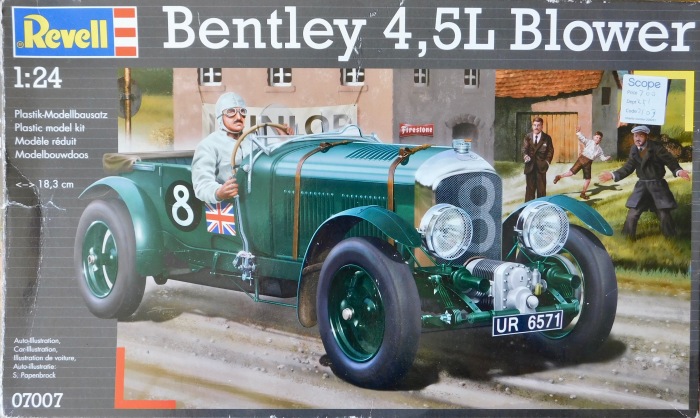 Scale modelling is a hobby I pick up from time to time, only to drop it for months or years. This is probably for the best, otherwise I’d have wonky aeroplanes gathering dust all over my home.

I did wonder if it was something Bond himself might have enjoyed as a car-mad little boy, but plastic kits of this sort didn’t appear on the market until the late 1930s, by which time he would have discovered girls. And after the war, he acquired the car itself.

The Bentley 4,5L, or 4½ Litre if you’re feeling less German, was produced between 1927 and 1931. 55 models were ‘Blower’ Bentleys fitted with an Amherst Villiers supercharger.

This is the thing sticking inelegantly out of the front because Bentley founder and engine designer W.O. Bentley refused to modify the engine to make room for it under the bonnet. A supercharger compresses the air fed to the engine, giving it more oxygen and increased power. 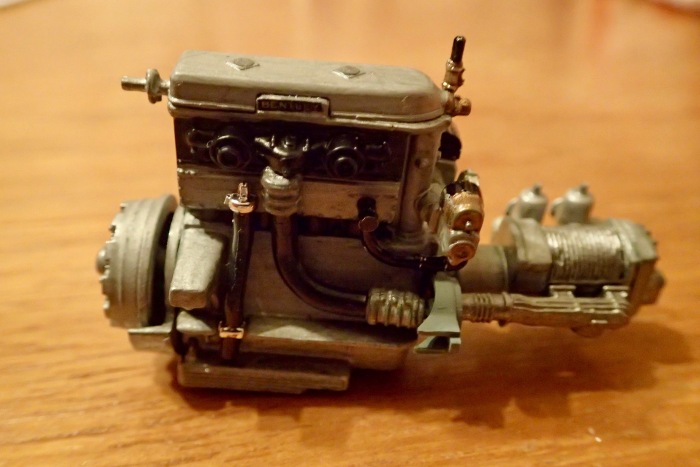 The Blower was a real hooligan of a car in its day; a friend recently learned that his mum had been fined £300 in 1937, enough at the time to buy a house, for doing 65mph over Kingston Bridge in hers. (Obviously, I don’t condone speeding but that’s pretty cool.)

Revell’s kit has more than 100 parts and is marked as skill level 4 of 5: ‘For the more experienced modeller’. I have many years’ modelling experience but what I am mostly experienced in is making a mess, so I approached it with some trepidation.

This would be my second attempt at a car. The first was Doyusha’s Goldfinger Aston Martin DB5 back in the ’90s, which didn’t go that well (you try painting a moustache on a 1:24 scale Oddjob). If I’d kept the kit unmade in its box I could sell it on eBay for £100 today. I regret nothing.

The colour scheme and transfers in the box represent UR 6571, which finished second at the 1930 French Grand Prix and is done up in British racing green. If you want to make Bond’s Bentley you’ll have to fudge around a little.

Bond owned his prewar Bentley, ‘a battleship-grey convertible coupé, which really did convert’, from Casino Royale to Moonraker and smashed it up twice, the second time permanently. Although it’s his personal vehicle, it sees action as part of his mission on both occasions, pursuing Vesper’s kidnappers along the French coast and Drax’s Mercedes from London to Dover.

As far as I can tell, ‘battleship grey’ can be pretty much any shade of matt grey from light to dark, so pick whatever takes your fancy. After lengthy professional consideration, I decided to use the colour I happened to own a tin of already (Revell Matt Grey #57, for the record).

I felt that Bond would have gone in for black leather, rather than the green upholstery and tan steering-wheel cover recommended in the instruction booklet, and removed any racing decals (though I couldn’t resist leaving him a Union Jack on the passenger side).

As well as using the novels for reference, I had Fay Dalton’s gorgeous illustrations from the Folio Society edition of Casino Royale, plus Dennis Calero’s from the 2017 graphic novel, which give a sense of the big car’s power and movement.

I was grateful for the chance I’d had to examine a real Blower at Jack Barclay Bentley during their June 2019 Bond exhibition and get an idea of how it fitted together, since it can be hard to follow the building instructions if you’re not sure what exactly you’re building.

Another important piece of research, or so I’m claiming, was The Fast Lady (1962), in which Loveable Leslie Phillips cons Stanley Baxter into buying a vintage Bentley to impress Julie Christie. It’s a sweet film in which nothing particularly bad happens and nobody is terribly villainous; recommended.

Assembling the model was something of a Sisyphean task, since it seemed whenever I glued one piece on, another bit fell off. After sitting on my workbench (by which I mean ‘taking up most of the kitchen table’) for several months, it was completed within a week of lockdown commencing in the UK, so every cloud has a silver lining.

Obviously as its maker I can see every imperfection, thumbprint and blob of glue (I have to pretend the coachwork doesn’t sit straight on the chassis because it’s cornering hard under terrific forces), but my loved ones have kindly, and wisely, expressed polite admiration for the project. Most importantly. I own what is, as far as I know, a unique item, which is the ultimate goal of the collector—even if it’s valuable only to me.

The Revell Blower Bentley kit was released in 2014, and can be bought online with a little searching. If you fancy something a little easier, try the Airfix 1:32 scale Aston Martin DB5 starter set, which includes paints, brushes and glue.

As for me, my next project is G-HUEY, the fake Red Cross helicopter that snatches Koskov from the MI6 safe house in ‘The Living Daylights’. Wish me luck!

Bond and Bentley: A Match Made by Fleming

3 thoughts on “Building the (Model) Bentley”