Cars and James Bond have always had a strong association and, contrary to popular belief, Bond’s preference has historically been firmly with Bentley Motors as established by Ian Fleming. In fact, John Pearson could not have put it better in his fictional biography of Bond when he said:

“For Bond, the Bentley was an echo of that lost rich Europe he had known before the war, and, as he says, ‘everyone should have at least one folly in his life.’ The Bentley was quite clearly his.”

Artistic License Renewed asked a Bentley spokesman about their involvement with Bond over the years: 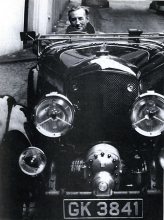 “Bentley has always had a strong affinity with the Bond brand and this goes back to Ian Fleming’s original books where the cars feature prominently. Bond owns and drives Bentleys in Casino Royale, Moonraker, Thunderball and on Her Majesty’s Secret Service.

The Casino Royale and Moonraker car is arguably one of the most famous Bentley models, a 1933 4 ½ Litre Bentley ‘Blower.’  These cars raced at Le Mans and were also exceptionally quick road cars as well and they were famous for having a supercharged engine to deliver even more speed and power. The strident whine created by Amherst Villiers Supercharger at certain speeds was very distinctive and may help to explain the ‘Blower’ nickname.”

The battleship-grey colour would also have been very distinctive. Unfortunately this car was written off chasing Drax in Moonraker but Bond replaced it with a 1953 Mark V1Bentley by the end of the book.  By the time Thunderball comes out Bond is driving a Mark II Continental (1952-55). These Continental cars were some of the most elegant post-war Bentleys and capable of cruising at 100mph, interestingly the battleship grey paint remains here as well and he has a complete new, bespoke body put on the car to suit his driving needs by the famous coachbuilder Mulliner. Mulliner is owned by Bentley today and many of our cars feature special Mulliner options which enhance performance and interior and exterior styling.”

Ivar Bryce‘s grey automobile was probably the inspiration for ‘the locomotive’ described here in Thunderball:

“Bond had the most selfish car in England. It was a Mark II Continental Bentley that some rich idiot had married to a telegraph pole on the Great West Road. Bond had bought the bits for £1,500 and Rolls had straightened the bend in the chassis and fitted new clockwork—the Mark IV engine with 9.5 compression. Then Bond had gone to Mulliners with £3,000, which was half his total capital, and they had sawn off the old cramped sports saloon body and had fitted a trim, rather square convertible two-seater affair, power-operated, with only two large armed bucket seats in black leather. The rest of the blunt end was all knife-edged, rather ugly, boot. The car was painted in rough, not gloss, battleship grey and the upholstery was black morocco. She went like a bird and a bomb and Bond loved her more than all the women at present in his life rolled, if that were feasible, together”

Fleming revealed in interview that he had put Bond in a Blower because he liked him to ‘use dashing, interesting things.‘ he choice was also no doubt in tribute to Fleming’s friend, Amherst Villiers; the two met in 1927 and became firm friends during social gatherings and visits to Paris (Villiers would later paint Fleming’s portrait).

In Fleming’s The Living Daylights, the Bentley Continental pops up briefly while Bond is at the firing range:

“The two men walked through the handsome facade of Club Row behind the range to Bond’s car that stood opposite the bullet-pitted iron reproduction of Landseer’s famous ‘Running Deer’. ‘Nice looking job’, commented the Range Officer/ ‘Never seen a body like that on a Continental. Have it made specially?

Yes. The Sports Saloons are really only to seaters. And damned little luggage space. So I get Mulliner’s to make it into a real two-seater with plenty of boot. Selfish car, I’m afraid.”

Sean Connery, drove a Bentley in 2 of the films. In From Russia With Love, he drove a 1935 Bentley 3.5 Litre Drophead Coupe Park Ward, and in Never Say Never Again he drove a 1937 Bentley 4 1/2 Litre Gurney Nutting 3-Position-Drophead Coupe. 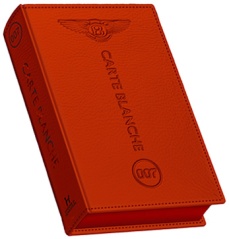 In Carte Blanche, award-winning thriller writer Jeffery Deaver reunites Bond with this classic marque. In this contemporary adventure, the agent will be behind the wheel of the sophisticated new Bentley Continental GT. To honour the release of Carte Blanche, Hodder and Bentley have partnered to create the exclusive Bentley Special Edition.

A team of seven designers submitted proposals for the edition and the final design came from Bentley Senior Designer Brett Boydell. He comments:

“As a designer it doesn’t get much better than a brief of ‘Carte Blanche’! The design features radical concepts that we feel reflect the name of the book, the ideas inherent in the Bond legacy, and the design principles we are passionate about.”

Hidden within the pages is a single polished 9mm bullet, individually marked with a number distinct to each copy, making the edition truly unique. The Bentley Special Edition arrives encased in a shaped metal box that evokes the signature outline of the new Continental GT. the Special Edition’s most dramatic feature is the die-cut bullet hole that pierces the book. Inside is carefully placed a single polished bullet, upon which is a number distinct to each copy of the book.

“Bond destroys as well as he creates and saves. It was this element I needed to convey in my design. The reader has the excitement of finding the bullet housed in the centre of the pages with the text positioned so that the reading experience is undisturbed. I hope they find the book as exciting to hold and look at as the unfolding drama itself.”

In another unique collaboration between three of Britain’s iconic brands – James Bond, Bentley Motors and Penguin Books – a special, limited edition of the new Bond book Devil May Care was released.The result was a beautiful and striking edition which takes its inspiration from hard-covers of the original 1950s and 1960s Bond books combined with the stylish Bentley owner’s manuals and handbooks of the era.

Inside the book is a specially designed model pewter Bentley, described in detail by Fleming in Thunderball. Nick Foulkes describes a unique collaboration between the publisher, Bentley, and a reborn 007:

“Transferring our design knowledge from the car world to a book was a new challenge for us, but working closely with Penguin, we think we have come up with a unique product which is complementary to the history of Bentley and Bond that can be appreciated by all.”

Bentley and Vintage also teamed up to capitalize on the 60 year anniversary of James Bond – Casino Royale and have released a limited edition print run that will run you $1200.00. Only 500 copies have been made to commemorate the character whose car of choice was the 1933 Bentley. The book has been created by designers Kris Potter and Stephen Parker at Random House, who were inspired following a trip to the Bentley Motors HQ in Crewe. 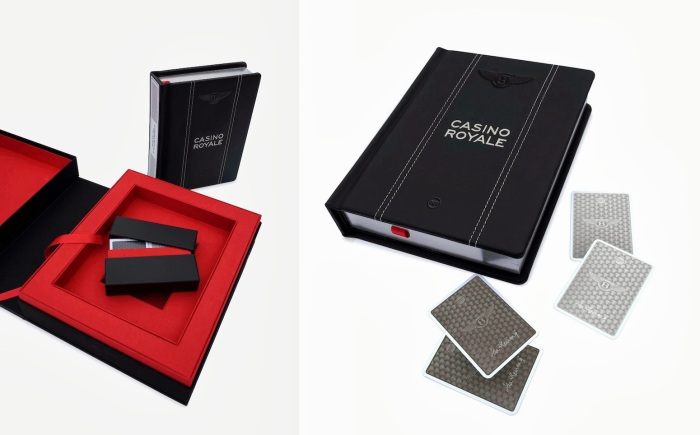 ‘We knew that any design we came up with would have to reflect the incredible craftsmanship and heritage we had seen in the Bentley cars at Crewe, the challenge for us was how we could combine this with the coolness and nostalgia of Bond… The inspiration was endless.’

The metal spine is inspired by Bentley’s steel tread plate, and it is illustrated by Damian Gascoigne.

Bentley then announced the launch of its first luxury fragrance range for men, which brings together the two world-renowned brands of the master French crystal maker Lalique and the iconic British car company.

“Bentley and Lalique have a similar history. Both companies were founded almost 100 years ago. Both stand for craftsmanship and tradition, but also for luxury, lifestyle and innovation. To create a fragrance together is to capture the essence of our skills and our vision in a bottle,”

The limited crystal edition Lalique for Bentley has been inspired by the legendary “Flying B”, the mascot of Bentley cars. The numbered and signed edition is a marriage of the two brands, Bentley Motors and Lalique Cristal at his best.

Continuation authors have on the whole been loyal to Bentley; let’s not forget John Gardner put Bond in a Bentley Mulsanne Turbo in Role of Honor and Nobody Lives Forever. Now if only the films would do the same.

From Bentley With Love

4 thoughts on “Bond and Bentley: A Match Made by Fleming”