The Folio Society has released THUNDERBALL the Double-O-Seventh in the series of Bond novels with illustrations by Fay Dalton. 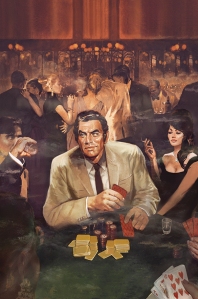 Thunderball is the Bond that has everything: exotic locations, super villains, thrills, double-crosses and Bond at his sharpest and most capable. It introduces one of Ian Fleming’s greatest villains – the nefarious Blofeld – and one of his most compelling female characters, Domino, a fierce and beautiful woman with a fondness for the good life.

Initially part of Blofeld’s inner circle, fate throws her into Bond’s arms and she proves herself to be a dangerous woman to cross. Bond himself grows in complexity with each novel and here he examines his own choices and mortality, as well as sparing with his CIA counterpart, Felix Leiter.

Fleming used much of his own background and experience as inspiration for the small details as well as larger plot points. Bond’s medical record, which earns him a stay in a health spa – noting that he smokes sixty cigarettes and ingests at least half a bottle of spirits daily – was roughly based on Fleming’s own lifestyle.

The nighttime underwater investigation of the Disco Volante was drawn from the ill-fated reconnaissance mission of MI6 agent Lionel ‘Buster’ Crabb, who vanished while investigating the Ordzhonikidze, a Soviet cruiser moored at Portsmouth Harbour in 1956. 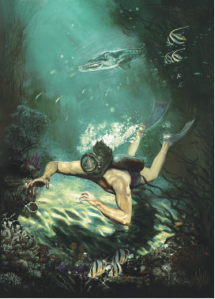 Illustration ©2019 Fay Dalton from The Folio Society edition of Thunderball

Here Dalton explores the darker side of the adventure, depicting Blofeld’s grisly execution of an underling and the brutish Emilio Largo, doused in hellish light and ready to extract the information he needs from his victim by whatever means necessary.

Balancing these sinister visions are glittering images of the casino, the cool spectacle of a plane sinking beneath the waves, and the sunlit tropical fantasy of Bond carrying a bikini-clad girl from the ocean.