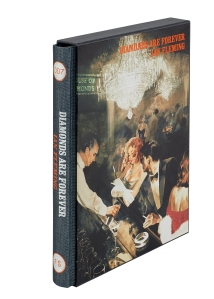 The Folio Society’s Ian Fleming James Bond series continues with Diamonds Are Forever in the sixth volume in the collection, featuring the distinctive and stylish binding design inspired by the secret agent’s impeccable suits, and a stunning illustrated slipcase.

Writing to a friend, Fleming commented with typical humour that for this novel he had included:

‘every single method of escape and every variety of suspenseful action that I had omitted from my previous books – in fact everything except the kitchen sink, and if you can think up a good plot involving kitchen sinks, please send it along speedily’.

Fay Dalton once again provides the stunning illustrations to go along with this handsome edition and we were lucky enough to speak exclusively to Fay about her ongoing collaboration.

001. How did the collaboration with Ian Fleming Publications, The Folio Society and yourself come together?

At the time I was represented by an illustration agency and my agent suggested me for the project to Art director Sheri Gee. I then produced some samples to show Sheri and IFP which they were very happy with and it went on from there. I was thrilled and super excited to be officially illustrating 007 with The Folio Society. I knew it would be an incredible opportunity to produce a beautifully crafted collection.

002. Had you read any of the Bond novels before embarking on the project and what was your approach to the brief?

I hadn’t read any of the novels but was a fan of the films, my favourite film being ‘Casino Royale’ which has also been my favourite book followed by ‘Dr. No’ and ‘Thunderball’. My approach has been to read the novels and try not to refer back to my memories of the films as I’m trying to illustrate Ian Fleming’s words as accurately as possible. In a way illustrating the characters, cars, and environments are easier being instructed by Fleming’s beautifully inspiring descriptions. 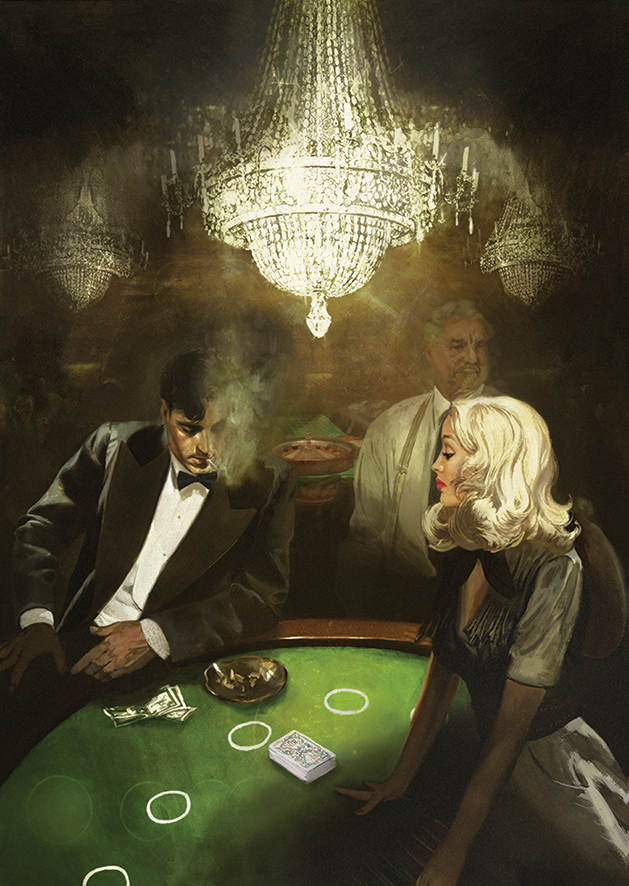 003. Which illustrations have you found the most challenging and rewarding?

Each illustration has its challenges, whether it’s perfecting the Bond girl, making sure all of the fine details of a busy ocean floor are depicted or giving the villain the right amount of dark mysterious aura whilst not giving the plot away! There’s also the challenge of obscuring Bonds face a little every time we see him so he himself has a little espionage mystery.

I love illustrating strong characters and glamour so all of the scenes suit me! There isn’t one book in particular or scene that I found much more challenging than another. 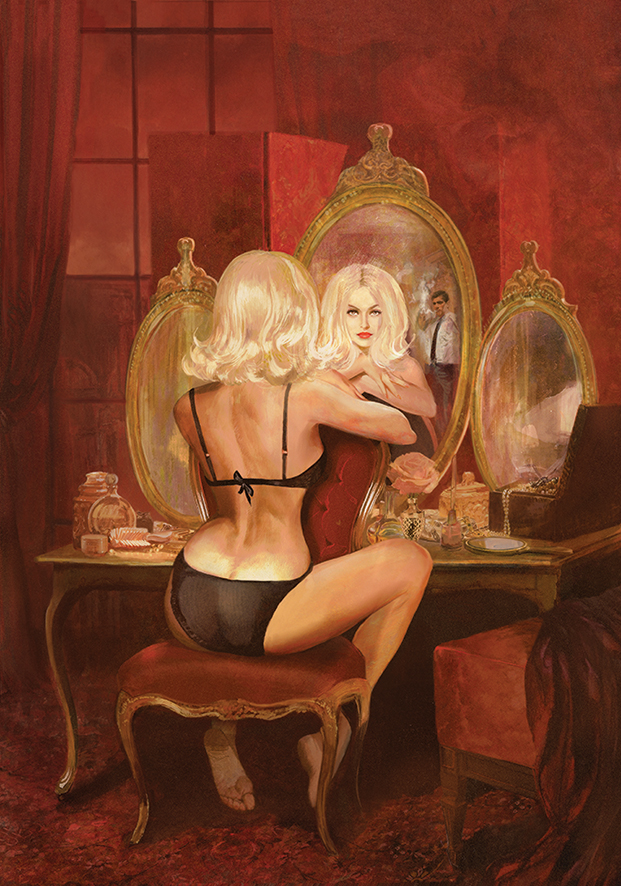 004. Who are some of the artists who have influenced your work over the years?

005. Were you familiar with the work of Richard Chopping, who illustrated many of the first edition Fleming novels?

I was, I love his covers and his symbolic approach.

006. Have you illustrated any other book jackets yourself or would like to?

I haven’t yet, I do a lot of comic and graphic novel covers, crime fiction but I’d love to illustrate glamorous titles like the Great Gatsby or gothic/horror titles.

The Folio Society edition of Diamonds Are Forever by Ian Fleming

Diamonds Are Forever was Fleming’s fourth book in the Bond series, where America is the backdrop for the adventures taking the reader from the simmering, sulphurous mud baths of Saratoga to the ‘ghastly glitter’ of Las Vegas. It is in the gambling dens of ’50s Vegas – a world of glamour and gangsters – that we see Bond in his element, sizing up the roulette wheel and casually taking the house for everything it’s got. The only Bond novel not to have roots in the Cold War, Fleming makes certain that Diamonds are Forever has more than its share of larger than life villains and set pieces.