Who else could have co-founded Alcoholics Synonymous but Richard Hughes (aka Dikko Henderson), after he had moved from Tokyo to Hong Kong. And when Ian Fleming flew in to the colony (as it was then) in November 1959, it was natural that on his first night in town, his friend Hughes should invite him to a special gathering of the Alcoholics to celebrate the fourth anniversary of its founding. 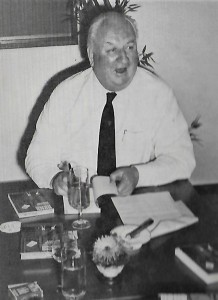 Alcoholics Synonymous had been the brainchild of Hughes and Jack Conder – who proved to be almost the equal of Hughes when it came to Hong Kong legends. (And a digression here might be of interest.)

One of thirteen kids, Conder had left home in the north east of England when his mother was widowed in 1924. He joined the Royal Army Medical Corp and was later posted to Shanghai in 1927, sailing on the Kildonan Castle from Tilbury to Hong Kong in 28 days. Here he was billeted for a few days in the Peninsula Hotel – then still in the final stages of construction – before taking an old P&O tub called Kammala to Shanghai along with various other battalions, all of who were acting as perimeter guards of the International Settlement. In 1928, having completed his Army Service, Conder joined another 400 ex-pats in the Shanghai Police. Their main problem was to deal with the opium trade, which along with gambling and prostitution was the way the gangs made money.

When not pursuing the gangs (and in particular the Green Gang), Conder could often be found in the rather more gentile surroundings of the Astor House Hotel’s tea dances, a popular pastime for ex-pats, and where he taught foreign and Chinese girls to dance foxtrots and waltzes. It was here he met his future wife Grace Susan Burgess – who had been born in Shanghai. They married on 27 June 1931, and together they had a son and a daughter.

He stayed with the Police for three years and then worked for the Shanghai Gas Company before joining the shipping company Butterfield and Swire. When War broke out with the Japanese, he and his family were interred in a civilian camp where he was put to work in the kitchens. In his own words, he was in the camp for six months and ten days before deciding to escape as he was having serious domestic problems with his wife – and the Japanese had refused to move him to another camp. He escaped by crawling under the barbed wire fence and eventually met up with British forces in south China. (There is a whole chapter devoted to Jack’s escape from Shanghai and the Japanese in Hughes’ book Foreign Devil.) In fact he claimed that he preferred the threat of being captured and tortured by the Japanese than spending any more time with his wife.

Many years later, the letter he sent to the Camp Commandant after his escape was found in Tokyo and is heartfelt in his grievances about how he suffered at his wife’s hands but it is questionable as to how serious their falling out was, and whether he was in fact using it as a smokescreen so that his family would not be punished for his escape. Whatever their relationship, at the end of the war, his wife and two children were successfully repatriated to England while Conder decided to live in Hong Kong.

Here, Conder’s first job was Manager of the Red Lion in Kowloon before working at a bar called Victor’s, which he then took it over and naturally renamed it Conder’s Bar. The bar was off Queens Road Central at 22A, a narrow, dark, side alley, and despite being far from unique, was certainly one of the places to drink – for expats living in Hong Kong and also for visiting military personnel. It promised an English pub atmosphere with Conder billing himself as the ‘most popular host in the Far East.’ 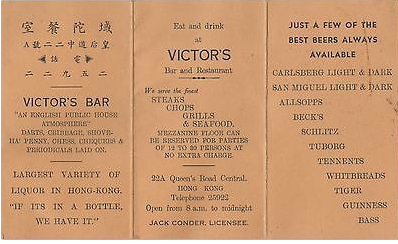 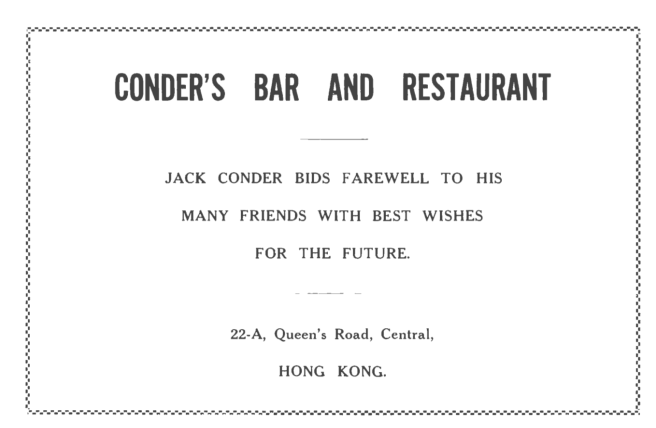 Fleming described the bar fulsomely, ‘We started off our evening at the solidest bar in Hong Kong—the sort of place that Hemingway liked to write about, lined with ships’ badges and other trophies, with, over the bar, a stuffed alligator with an iguana riding on its back. The bar belongs to Jack Conder, a former Shanghai municipal policeman and reputed to have been the best pistol shot there in the old days.’

Fleming said also that Conder sold drinks at reasonable prices, and others said that the house speciality was a Black and Tan (Worthington draught beer and Manx’s Oyster Stout). The establishment was on two floors; in the downstairs bar he did not allow women to drink but they could eat in the restaurant on the first floor.

Unsurprisingly, the bar became the regular meeting place of Alcoholics Synonymous, which had been founded on 5 November 1955. Membership was restricted to 16: Conder was Treasurer, Hughes co- founder, and the rest were a mix of press people, businessmen, diplomats, and a few lawyers. Fleming thought there were more press people than other types but whatever they were, he described them as lesser Hemingway characters. One of the members he met was Wendell ‘Bud’ Merick, an American who had been a war correspondent during the Korean War and then had moved to Hong Kong  as Bureau Chief of United Press. Another was Austin Coates, son of the composer Eric Coates, and a Civil Servant and Special Magistrate in the New Territories. During the War he had served in RAF Intelligence in Asia.

When Fleming came into town this was the first time for the Alcoholics to meet on a Wednesday night as usually meetings started on a Saturday morning before drifting into a long and leisurely lunch – Conder’s sold steaks, chops and other typically hearty food, – with conversation that put the world to right continuing late into the afternoon.  Fleming of course was by now more than famous and so it was unlikely that the Alcoholics were upset by this change of schedule. 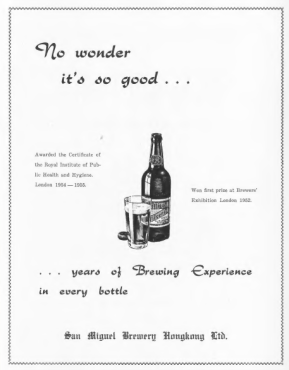 Apparently Conder’s sold twelve different types of beer but initiates to Alcoholics Synonymous had to drink sixteen bottles of the locally brewed San Miguel – at least this was what Fleming was told – which Fleming did not find to his taste. For those who have not enjoyed the pleasure of drinking San Miguel it was first brewed in the Philippines in the 1890s and was exported to Hong Kong until the company opened a brewery in the colony in the late 1940s. It is still Hong Kong’s most popular beer (or more accurately pilsner) but as Fleming was not a big beer drinker and the Pilsner style barely existed in 1950s England, it is perhaps unsurprising it was not to his taste.  On the other hand, even today, it is generally regarded as a rather light and thin brew with little character.

However, it would seem that Fleming was being gently strung along (most likely by Merick) as new members and their guests (guests were always welcome – but not wives in the early years) did not have to endure an initiation ceremony not least because to become a member one’s drinking prowess was readily assumed. In fact the Charter of the Club was clear:

Another more peripatetic member was the journalist Alan Whicker. He had been coming to Hong Kong (and also Tokyo) since his days as a war correspondent covering the conflict in Korea.  After switching to broadcast journalism, he returned to Hong Kong in 1958 for the opening series of Whicker’s World and, according to his autobiography, he always made a visit to the Alcoholics. Other cities he visited in this opening series included Tokyo, Singapore, and Hawaii, and it may have been the success of Whicker’s World that made the Sunday Times decide to despatch Fleming on his own tour for the Thrilling Cities series of articles. 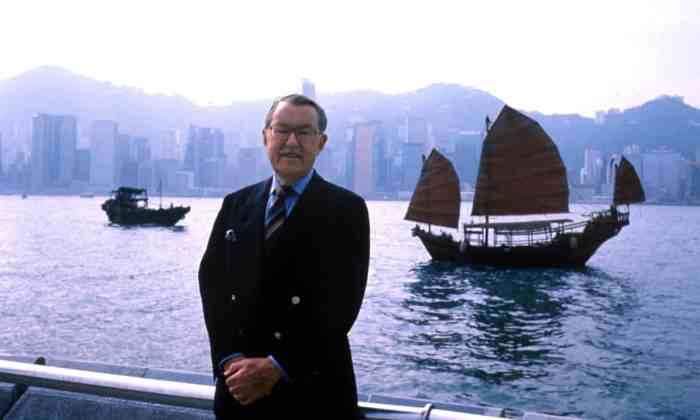 Alan Whicker on his travels in Hong Kong. Photograph: ITV/Rex/Shutterstock

In fact Hong Kong was one of Whicker’s favourite cities, and from his first days in Asia, he’d become a close friend of Hughes. When a This Is Your Life programme was made with Whicker in 1982, Hughes appeared on it. As Whicker wrote in his autobiography, ‘Dick came on stage to explain my [misrepresented and erroneous] fatal crash [in Korea].’ Hughes explained,

“The front page story in the Daily Mail said he’d been lost in action, and we presumed the press can’t be wrong. It gave us an admirable excuse to sink a few drinks and to toast one of our friends – a great reporter and great interviewer who proved once again what our mutual friend Ian Fleming said, ‘You’re only as good as your friends.’” 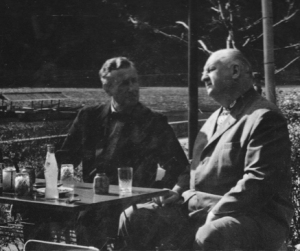 Claiming that both shared Fleming as a mutual friend is a typical Hughes’ exaggeration. As is widely known, when Whicker wrote to Fleming in early 1964, asking whether he could be interviewed for an episode of Whicker’s World, he received in reply a curt brush-off that included the line, ‘Wouldn’t you rather do the Battersea Dogs Home and forget about me?’ However three years later Whicker was to build an episode around the filming of You Only Live Twice but of course by that time, Fleming had died.

Back in Hong Kong, due to redevelopment, Conder’s bar moved to Argyle Street on Kowloon side in 1963 and around this time Jack found a new partner Madam Helen Yao. (Jack died in 1976 and his son was able to attend the funeral. His wife Grace was to live until 1999.) But Alcoholics Synonymous remained on Hong Kong Island, moving bewtween various locations around Central until it finally came to an upstairs room in the Foreign Correspondents Club in 1966. Here Hughes continued to preside over it right up until his death in 1983. Indeed, as a lapsed Catholic, he did not have a last supper but a last luncheon: at a Saturday gathering of Alcoholics Synonymous in the FCC where he drank his usual tipple of Russian vodka before lunch, followed by wine over lunch. A few days later he was taken to hospital where he died.

After his death Alcoholics Synonymous continued and was certainly still going into the 2000s but it now seems to have faded away. Of course Fleming never returned to Hong Kong and so never had the pleasure of meeting the Alcoholics again. 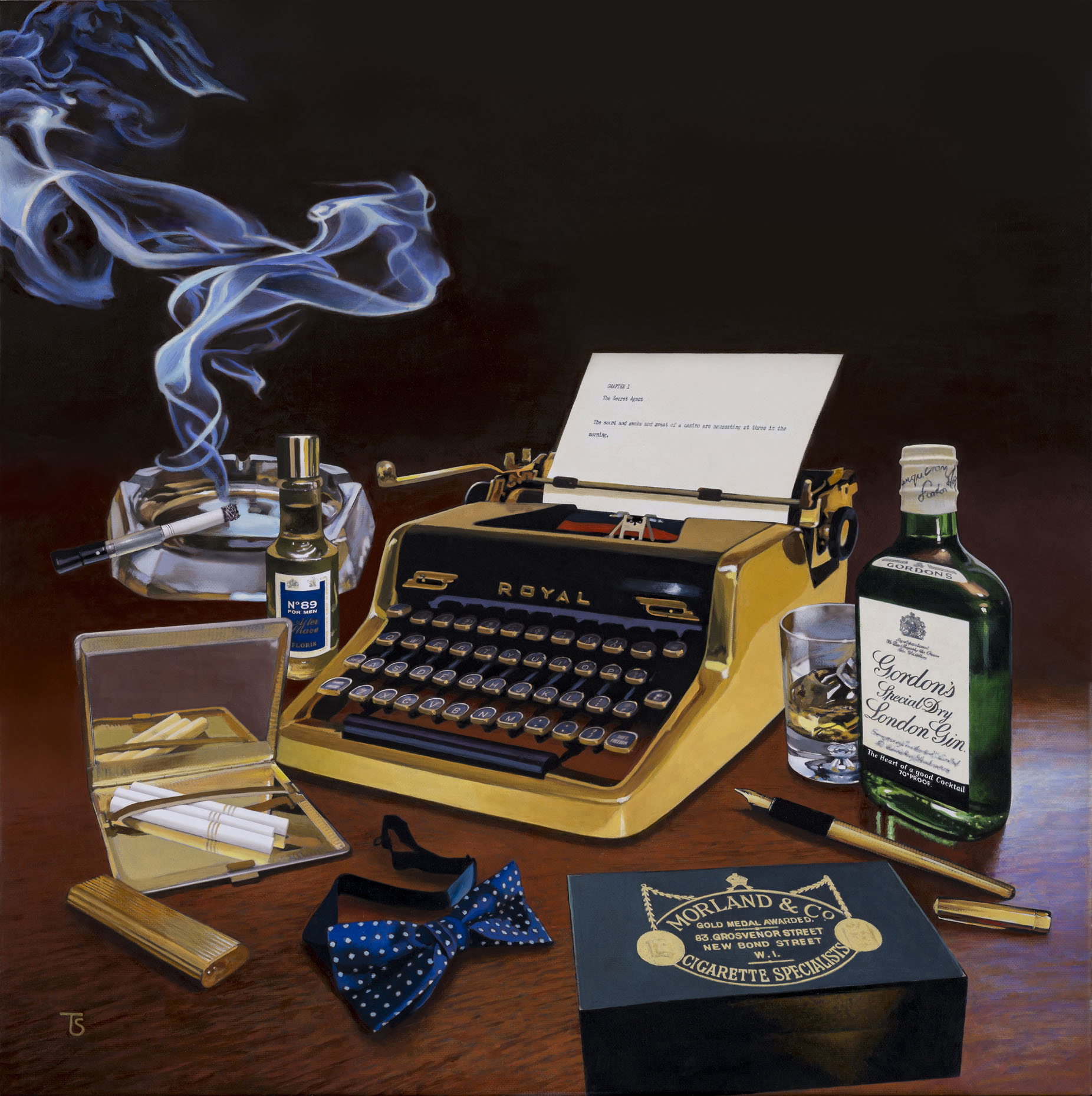