To celebrate the anniversary of publication of From Russia, With Love we have performed a coup of our own and welcome former FSB intelligence officer, Colonel Boris Kokorin* (his alias naturally) in from the cold, to ask him about the impact of Bond on Russian culture.

*With special thanks to Nicholas Anderson for facilitating this interview. 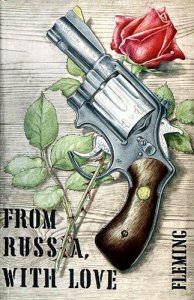 When *From Russia with Love* came out, it was deemed propaganda but did any Russians, who happened to just be Bond fans live in any fear?

I don’t believe any Soviet citizens lived in fear over Bond because it didn’t exist for them to fear it to start with. What they did fear was the black market buying of vinyl records and videos out of the back of mainly West German and Swedish visitors’ cars where they were quoted prices mostly in dollars, pounds and deutschmarks.

The government did not want to see hard currency leaving the country and spent on what was perceived as trivial products spreading disinformation. The government wanted the hard currency to pay for more important industrial-related items that the country needed. The Bond soundtracks and videos were among those barred items, yes, but an actual legal western film in cinemas or kinos were non-existent during the cold war as they were always bootlegged.

Did these underground ‘kinos’ really exist and were some Western movies and books blacklisted?

Yes, they existed but were tolerated. The government had to grant the licence first though. Locally-made films always had preference over foreign-made. It was the same for illegal gambling at the back of someone shop. The neighbourhood knew where the location was from word-of-mouth as did the police and domestic intel…who went to watch it for themselves for their own social wants.

In these mostly shops and sometimes richer people’s dachas you would see a badly dubbed copy of a film before video came out. 99.99% of Russian people don’t read English so there was no market for books, even blacklisted titles. You have to understand that most people did not own a videomagnitofon (VCR).

The ones that did were the ones showing it in a small room and charged others in roubles to enter. The big theatres in the centre of cities were places where dance and song live events were performed. Nowadays there are modern cinemas to see films like in the west but it’s not as big a market as in the west.

Bond at the Orient Express | ©George Almond courtesy of http://www.oo7magazine.com

Do you have any insight on Russia’s view on British Intelligence, the Bond phenomenon, whether they had/have their own version of this etc?

What is there to say about SIS? They were our best adversary, paid more attention to detail than others. Mr Nicholas Anderson‘s successes with the Soviet navy secrets were very damaging to our national security.

Bond is not a phenomenon here. From what little I have seen since the days of perostroika it is comedy-joke, not taken seriously.

We have no equivalent on celluloid or print that I know of. Not yet anyhow. Russian people are more interested in music and ballet than film but those that do like films are mainly lovers of children stories.

From Russia With Love at 60: Serious Spy Novel or Popular Escapism?