This week we welcome the return of our Field Report series and spoke with Kent native Mark Ashby, about his literary Bond collection!

1. What is your favorite Chopping cover and why?:

Thunderball. I love the simplicity. It is a cleaner and more direct image than some of the other Chopping’s. The others seem a little more complex. The overall colour appeals too. The green baize. But I also love the Casino Royale dust jacket (not Chopping obviously). Yet again for it’s lovely simplicity.

I own first editions to all the novels, including the continuation books apart from Live and Let Die and Moonraker. Though my Casino Royale is without a dust jacket.

I think it is obvious by the answer to the question above. I would truly love to complete my set by obtaining the above two books and also a Casino Royale with a dust jacket. But considering all three are now three of the most expensive books in the canon to obtain it may still be just a wish. Nearly all of my collection was obtained a number years ago before things got really expensive.

4. When did you read your first Bond novel and which is your favorite?:

I read my first novel about late 1969 or early 70 which was Dr No. It was the Pan film tie-in which was given to me by a friends father who knew I was a 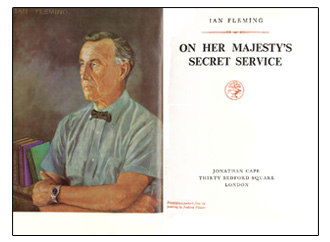 Bond fan. I came home with it very excited because it had pictures from the film on it. In this age when everything is available it seems incredible one got excited by such things. My Mum asked what I was going to do with it. “Read it of course”. “You’ll never understand it,” was her response.

My favourite book is On Her Majesty’s Secret Service. I think it is a wonderfully emotional story. It was the next one I read. Also in its paperback film tie-in edition. I had just seen the film so it was the one I sought out. Even at the age of nine I was visibly shocked by the death of Tracy in the film.

5. Do you have any favorite Bond dust jackets in paperback or by continuation authors? :

My favourite dust jackets are a toss up between the clean lines of the Raymond Hawkey set and the still life of various props and items from the stories that Pan released in the early 70’s.

Chopping’s covers to me are very much of their time, the 50’s. It was Hawkey that brought the books into the 60’s and the covers under which I read most of the books for the first time. Hence the nostalgic affection I have for them. I also have a huge affection for the early paperback film tie-in covers. As I explained above it was incredibly exciting to me to find images from the films. The From Russia With Love with the film sprockets punched out of the cover and the Thunderball tie-in with the letter from Domino. Which amazingly I found completely by accident and bought for 50p in the early 80’s.

I guess my passion for books is still predominately the Fleming’s. I am extremely critical of the continuation books. I much prefer the stories set in Fleming’s timeline. They just seem more authentic. The most underrated of the continuation books I think are The Moneypenny Diaries. The way they integrate contemporary incidents (Cuban Missile Crises, Kennedy assassination) into the Fleming timelines is interesting.

Mark is a Graphic Designer and lives in Kent.