The 3rd annual Whitstable Literary Festival in Kent this year, took on a spy theme and in particular Ian Fleming and his many Kent connections.

Fans of the genre were delighted to witness some of the best names in the literary espionage trade, including many who we have interviewed in the past such as Matthew Parker, Michael Smith, Steve Cole and Andrew Lycett. The organisers of the festival can also take great pride in welcoming Ian Fleming’s step-daughter and daughter of Ann Fleming – Fionn Morgan.

So in the spirit of Ian, I took off for Kent with the golf clubs in the boot and copies of Moonraker and Goldfinger for inspiration.

Kicking off proceedings was young Bond author Steve Cole, whose infectious energy had the packed out hall of children and adults enjoying every minute. He was there to promote his latest young Bond novel Heads You Die and talked about his inspirations for the book and explained a few old spy tricks and gadgets. He also revealed the title of his new young Bond novel for the first time anywhere, which is to be Strike Lighting. Judging by the long line of children waiting to get signed books, the next generation of Bond lovers is in safe hands. 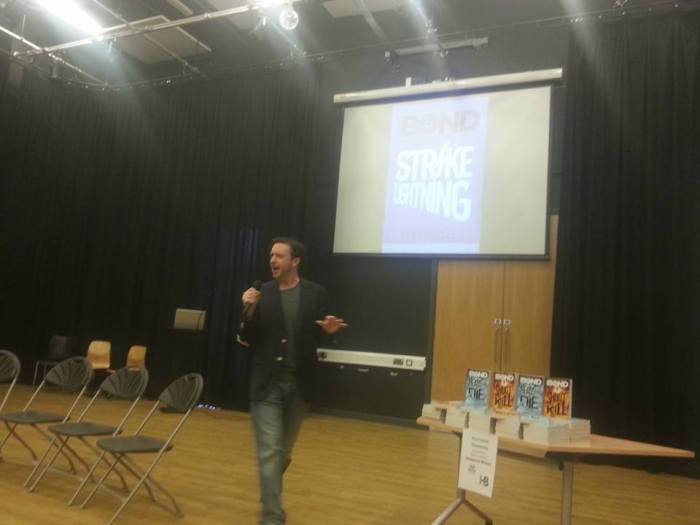 A quick gulp of sparkling wine and we then welcomed ‘Ian Fleming’ biographer Andrew Lycett to the stage. Andrew of course is a peerless authority on the life of Fleming and did a remarkable job of summarising some of the key points of a great life, illustrated by some extremely rare photos of Ian and his family that I suspect very few have seen. In later life, Ian and Ann found immense happiness in Kent, which Andrew made clear in Ian’s love of playing gold at Royal St. George’s in Sandwich where he was nominated for captain, the cottage White Cliffs in St. Margaret’s and their house the Old Palace at Bekesbourne near Canterbury, where he wrote Chitty Chitty Bang Bang. 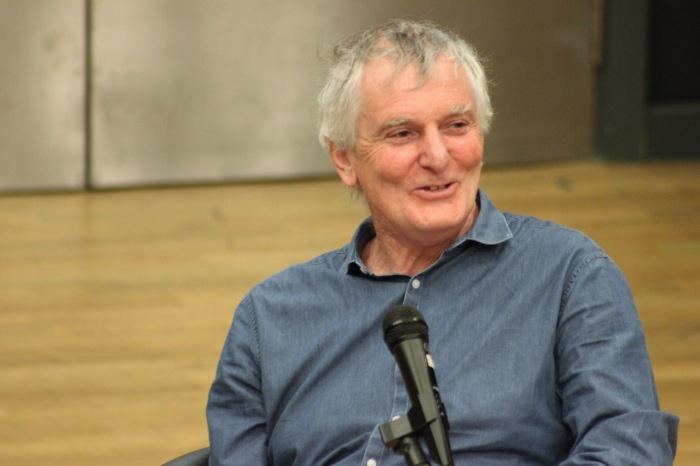 Fleming’s life was often one of contradictions and was perfectly encapsulated by his quote, which can be found on the back of Andrew’s biography:

“I’ve always had one foot not wanting to leave the cradle, and the other in a hurry to get to the grave, which has made for an uncomfortable existence.” – Ian Fleming

Another place of happiness for Ian was always Jamaica, where he would write most of his novels over a 2 month period during the Winter at Goldeneye in Oracabessa. Matthew Parker the author of ‘Goldeneye: Where Bond was Born: Ian Fleming’s Jamaica‘, was in discussion with Julia Wheeler, to discuss Fleming’s times there. This was a fascinating lens to look through not only Fleming’s life but the wider context of Jamaica transitioning from a colony to an independent country in August 1962.

Matthew described Ian as being at his most relaxed among the natural world: snorkeling around the reef, watching the birds (the characters Solitaire and Domino were named after some), morning swims, scrabble and plenty of rum. Matthew noted that anyone in his books who had hurt an animal or a bird, often met with a brutal end. The more controversial aspects in the books surrounding race in pre and post-colonial Jamaica were deftly handled by Parker, who provided the necessary historical context to Ian’s Jamaican trilogy: Live and Let Die, Dr. No and The Man with the Golden Gun. 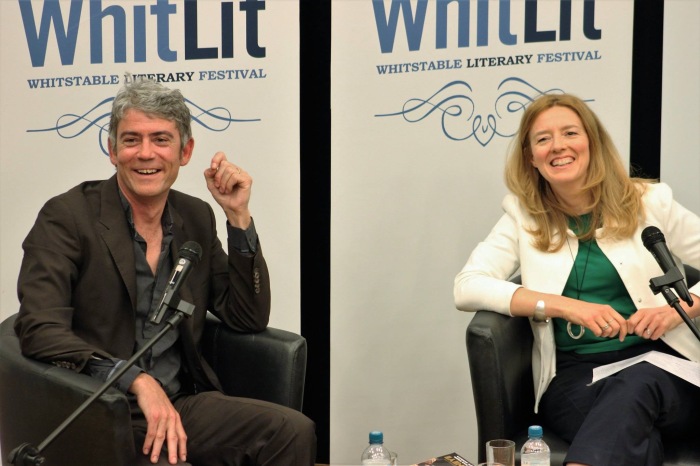 The evening was rounded off with a very rare appearance by Fionn Morgan. In discussion with Andrew Lycett, Fionn transfixed the audience with anecdotes and memories of both Ian and her mother Ann, peppered with one suspects, was completely new information. She described herself as being “particularly close to Ian” who was a “wonderful stepfather” and many hackneyed stories surrounding Ian she rebuked. One such story was that Somerset Maugham despite publicly not liking Casino Royale, in private liked it very much. He always replied to reader’s letters when he could and cared deeply about what his readers thought.

Fionn was also close to her half-brother Caspar Fleming and described Ian as a very loving father, if outwardly this was not obvious. He was very good with children and “Christmas was never the same without Ian”. Her stories about her mother, who she described as “very well read”, were particularly warm and revelatory. Most of the audience I’m sure could have listened to her for hours, but we left with the exciting news that Fionn is working on a book of letters between Ian and Ann. 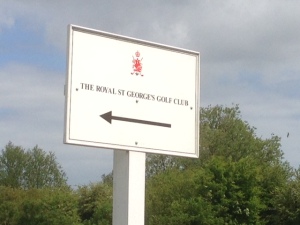 Saturday was spent retracing some of Ian’s Kentish footsteps, so first it was off to Royal St. George’s golf course in the delightful village of Sandwich to find out what inspired Fleming so much about this place.

Playing host to the Open as recently as 2011, the golf course is a true links course. It’s wide open spaces and blustery winds make it one of the most challenging courses in the country and as I walked across the public footpath, it reminded me of a Scottish landscape, with its thick gorse and undulating greens.

It was here of course (the name changed to Royal St. Marks in the novel to prevent people flocking to Sandwich) where the golf match between Bond and Auric Goldfinger was played out hole by hole. Even for golfers this might seem a bit excessive, but really golf is just the context in these brilliantly written scenes of two men playing a battle of wits.

Bond played against Goldfinger on a ‘beautiful day in May with the larks singing over the greatest seaside course in the world’. 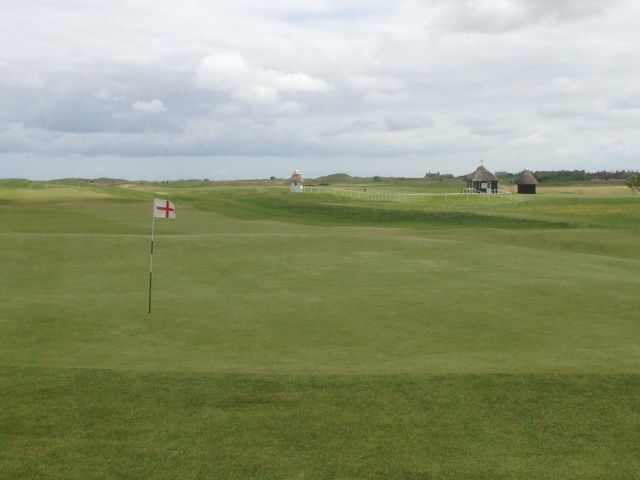 As Fionn remarked the previous evening, Ian felt most relaxed surrounded by his good pals on the course including Hilary Bray and Duff Dunbar. He played on the day he died in 1964, in terribly wet conditions at Royal St. George’s, as indeed did my grandfather who died at Goodwood golf course of a heart attack at the same age of 56. A quiet moment of reflection before departing for the next leg on the adventure.

Hammering down the Dover road to St. Margaret’s Bay

On it was down to the White Cliffs. Observing the speed limit, but no less, the route took me through Deal and down Charing Hill where in Moonraker, the dastardly Willy Krebs cuts the ropes on a lorry carrying rolls of newsprint, which crashes onto Bond’s following Bentley. Luckily no such trouble for me before I reached the beautiful and dramatic St. Margaret’s-at-Cliffe. Noel Coward owned the property White Cliffs, which he subsequently sold to Fleming in 1951, complaining that the area had become “a beach crowded with noisy hoi polloi”. 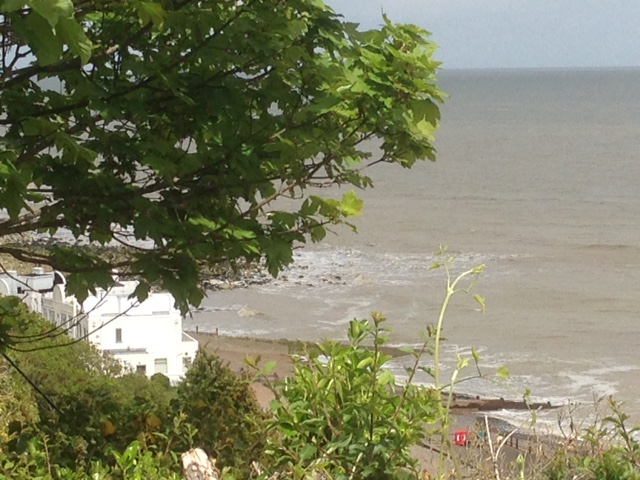 Fionn Morgan said “White Cliffs was a happy place” and you could see why and also why Ian was so inspired to set much of Moonraker there. The cliffs themselves loom over the bay, a brilliant white in the sun. You could just picture Bond and Gala Brand scrabbling on the rocks:

“They scrambled down a steep cliff-path to the beach and turned to the right beside the deserted small-arms range of the Royal Marine Garrison at Deal. They walked along in silence until they came to the two-mile stretch of shingle that runs at low tide beneath the towering white cliffs to St Margaret’s Bay.” – Moonraker 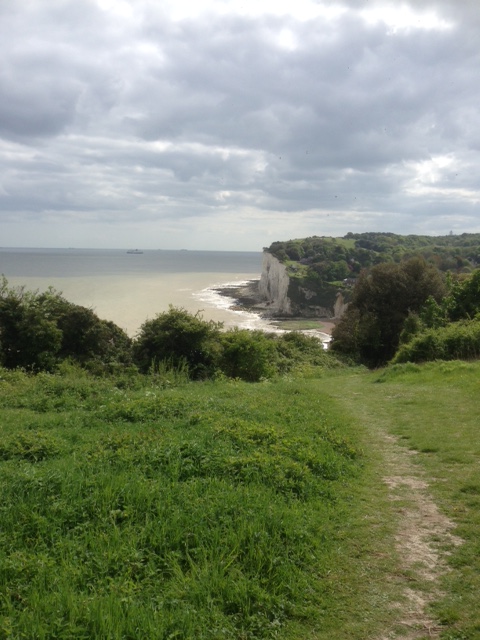 All of this was making me hungry, so it was back to the Whitstable Oyster Company for a typically Bondian meal consisting of local Oysters, dressed crab and a pint of Black Velvet. Who needs Scotts?! 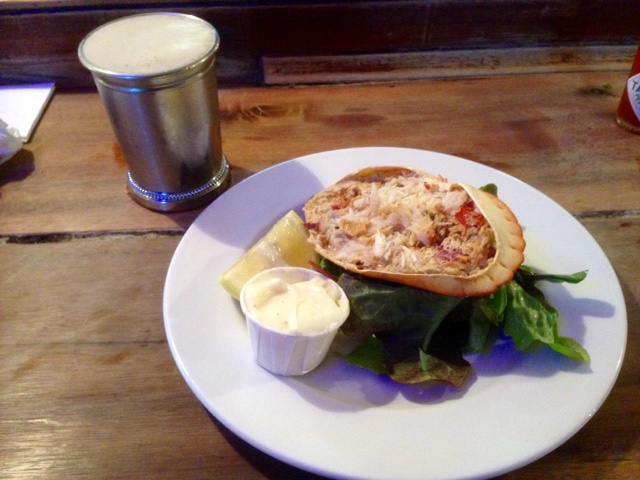 Do you expect me to talk Goldfinger?

The novel Goldfinger I will admit, is probably one of the most controversial of Fleming’s Bond novels, with charges of racism and sexism at moments, so looked a lot to grapple with at a 10am discussion group at the Whistable Public Library. The assembled panelists of Trevor Grundy, Dr. Helen Brooks and Paul Nolan however, were up for this odd job. 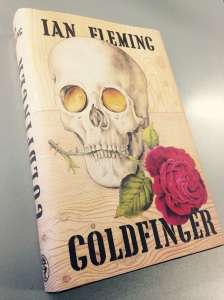 In a very well-balanced discussion, the actor Paul Nolan found putting aside some of the face value problems, the novel posed some serious questions. Was Bond a “metro-sexual sexist”? he asked.

Dr. Helen Brooks, Deputy Director of Research at the University of Kent found the novel highly “amusing” and while Bond was “threatened by lesbianism”, she thought there was a level of irony, which challenged the reader to think about multiple issues. The women in the novel are also “fundamental to the plot development” she added.

Trevor Grundy, who had spent many years in Africa as a journalist, regarded the book as pure pulp fiction and “fairy stories for adults”, which Fleming himself had admitted to. And yet, he recalled how many people in Africa related to Bond, even mimicking how he ordered a drink at a bar. As such, we are to reflect on perceived racism in the book within the context of its time.

By the end, many of the audience who had not read a Fleming novel, appeared to be asking about copies of Goldfinger and Moonraker at the library…

The discussion dug deep into each writer’s approach to writing, their research and their general opinion of spies. Stephanie (SJ) Parris felt that being a successful spy meant “cultivating friendships”, which dovetailed into Charlie Cumming‘s opinion that “charm and confidence is useful for spies”, and yet need a shard of ice in their hearts in order to use “deception with noble purposes”. A “licence to lie” instead of to kill. Francesca Kay hit the nail on the head with her assertion that a good spy novel makes you “addicted to the character rather than the plot”, as we remember characters like George Smiley, James Bond, Alex Rider or Modesty Blaize.

Dispatches from Kabul and Bletchley 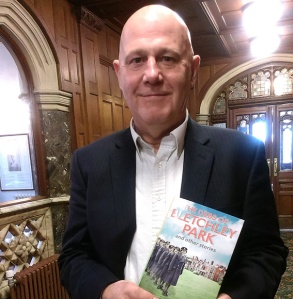 To round off the day, Michael Smith the author of many non-fiction books about the espionage game and in particularly Bletchley Park, gave a packed crowd a fascinating insight into the real heroes of the Second World War working out of Station X at Bletchley. Many of us are familiar with the genius of Alan Turing, but Michael toured us through many other integral codebreakers such as Dilly Knox and the many women (at one point 3/4 of the total workforce) who performed crucial, but often, tedious work contained in his book ‘The Debs of Bletchley Park’. Many of the audience in fact, had family connections to Bletchley and conversations continued well after the talk – all hush-hush of course.

In support of her book ‘Dispatches from the Kabul Cafe’ the Canadian journalist Heidi Kingstone, discussed her extraordinary 5 years living in Afghanistan between 2007 and 2012. “Afghanistan is more than just war, weapons and women,” she said. “I wanted to write a book which represented Afghanistan in a different light. The Afghans are not all just faceless victims,” she added.

After a weekend of larger-than-life heroes, a sobering thought about the real heroes we should also be celebrating. 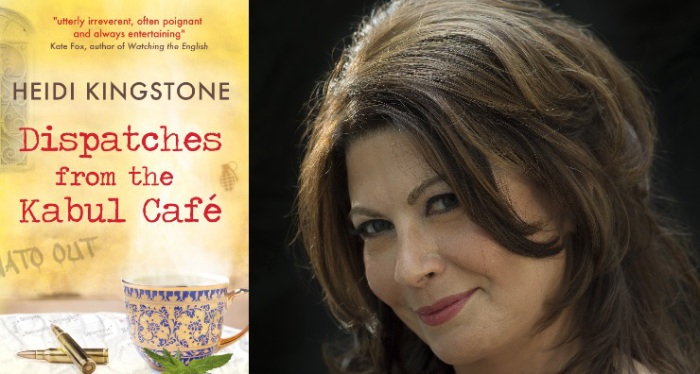 As the sun set on a triumphant WhitLit for another year, it left just one more stop on the journey: The Duck Inn located in the bucolic hamlet of Pett Bottom, a place where Ian Fleming would go to relax and chat with the locals in the garden of England. James Bond’s ‘obituary’ in You Only Live Twice revealed that he was raised by a maiden aunt in a cottage near the pub.

According to the blue plaque outside, this was where Fleming wrote You Only Live Twice. Fleming actually wrote the novel in January and February 1963 at Goldeneye, but we might hazard a guess that he came up with the idea for Bond’s past while sitting in the pub garden enjoying a powerful drink. 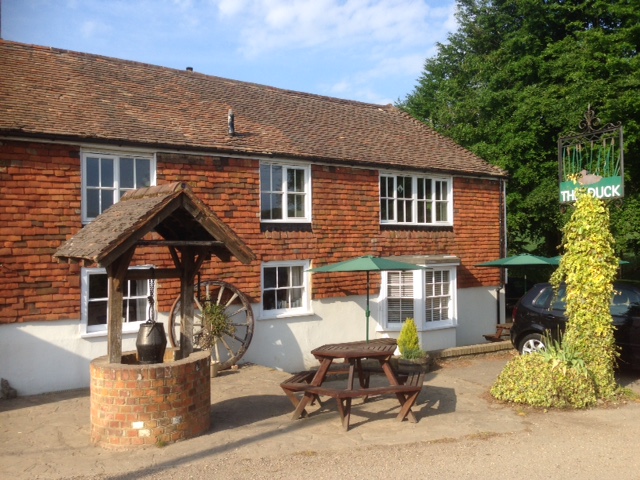 Romance at Bletchley? The reality was more drab