We are delighted to welcome Joseph Oldham from the University of Warwick, who is one of the organisers alongside Toby Manning, behind the inaugural ‘Spying on Spies‘ conference at The Shard in London from September 3-5. The conference aims to provide a timely forum for a retrospective discussion of the genre’s development and evolution across multiple media, exploring neglected and under-discussed areas of its long history, along with a consideration of where it is today and potential future developments.

We asked Joseph for the ‘gen’..

1. What is the mission of the conference and how did it get started?

Spying on Spies really came about from a mutual feeling amongst the organisers that there was a lot of fascinating research on the spy genre being conducted in different disciplines and departments around the world, but that there had been surprisingly little effort bring all these disparate perspectives together. A large-scale event seemed like an excellent way of encouraging greater dialogue between scholars examining what is undoubtedly one of the defining popular genres of the 20th century. Indeed, the political backdrop of most spy fiction means that it is perhaps uniquely effective as a popular genre for providing an alternative lens onto broader cultural and geopolitical shifts over the last hundred years or so. 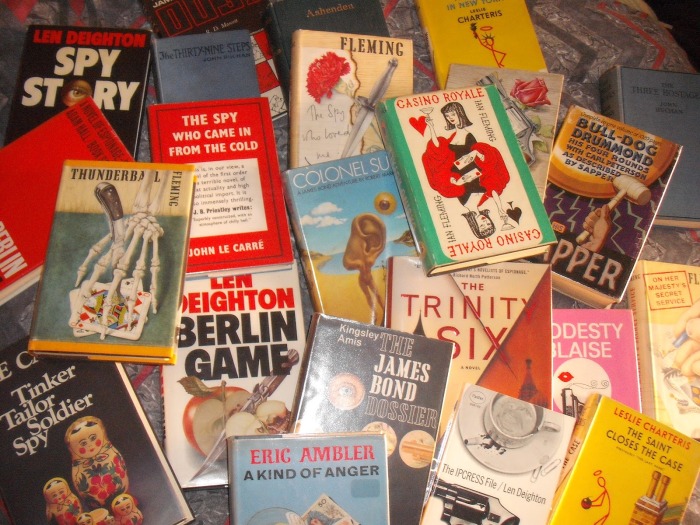 The genre has proven successful across a whole range of media, including novels, films, television and radio, all of which have brought their own medium characteristics and institutional priorities to bear upon it. This seems a crucial part of why such scholarship often seems so fragmented along disciplinary lines, yet simultaneously part of what makes the genre so interesting, and so we were particularly keen to cross these boundaries. In fact, we ended up receiving submissions relating to a much wider variety of media than we’d even anticipated, and scholars at our conference will be examining representations of espionage in poetry, theatre, comics and games.

We’re also delighted by the huge international scope and cultural diversity of the papers. In a topic such as this, it can be very easy for historical accounts to be separated by language barriers and biased towards countries with the most prolific export markets, but fortunately we believe that this conference will be highly effective for enabling the establishment of more global and cross-cultural perspectives.

We’re also especially pleased to be able to hold the conference within Warwick Business School’s base within the Shard, which we think adds to the sense of this being not just another academic conference but something really new and exciting.

The Spying on Spies conference to be held at The Shard, London

2. Tell us about some of the keynote speakers and their topics.

We have three keynotes, one for each day of the conference, all of whom we are very excited to be hearing from. Professor Phyllis Lassner (Northwestern University) is coming over especially from the US and will be presenting on the topic of women writers of spy fiction on the Thursday afternoon. Her research focuses on the responses of modern British women writers to World War II and colonialism, and in particular her project ‘Espionage and Exile’ explores the British response to World War II and the Holocaust through analysis of spy fiction and film from 1936 to the Cold War.

Dr Rosie White (Northumbria University) has research interests on the representation of active female protagonists in popular culture, including her study of women in popular representations of espionage, Violent Femmes: Women as Spies in Popular Culture. She will be presenting on women, ageing and espionage to conclude the conference on Saturday morning. We’re pleased that the conference will be giving such a pronounced emphasis to women as both writers and protagonists, as this is a genre whose histories have often tended towards a more masculine focus.

Our Friday morning keynote speaker is Professor James Chapman (University of Leicester), whose research focuses on British popular culture, including cinema, television and comics, considering the historical contexts and cultural politics of popular fictions. James Bond aficionados will doubtless be familiar with his book Licence to Thrill: A Cultural History of the James Bond Films, and perhaps also his similar study of television spy series, Saints and Avengers: British Adventure Series of the 1960s. As these books were a substantial influence on my own research direction, I am personally looking forward to chairing his session, in which he will be discussing the spy films of Alfred Hitchcock and their influence on the cinematic genre, a topic on which he is currently writing a book.

3. Do you think the espionage genre is going through a revival?

As a disclaimer, I should say I’m on slightly shaky territory with modern texts, as I usually prefer to write about things at least a decade old when it’s easier to make clear claims about their historical significance!  But my immediate impression is that whilst there is a lot of espionage fiction around these days, I can help but feel that (on film and television at least) little of it seems to be doing anything particularly original, and instead we’re largely going through a cycle of adaptation, pastiche, spoof and revival. In particular, I’m struck by how rapidly the big TV hits of the 2000s on either side of the Atlantic, 24 and Spooks, have revived before anyone really had the chance to miss them, which to me carries a slight air of desperation. 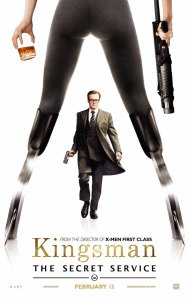 There also seems to be an a large number films and TV series around these days focusing on absurdly, ostentatiously unlikely characters being swept up into the world of espionage for comic or semi-comic effect, such as The Wrong Mans, Kingsman: The Secret Service, The Interview, Spy and American Ultra. There’s a long history of stories like that of course, but I do wonder if their current proliferation says something about increased public alienation from the idea of a secret state and difficulty in investing in a straightforwardly professional protagonist.

This doubtless has a lot to do with changing geopolitical contexts. I think that in the 2000s the ‘war on terror’ initially seemed to offer a compelling new engine for spy narratives to replace the Cold War, but it was rapidly consumed with so much controversy that it soon seemed to provide as much material for the spy genre’s more pessimistic cousin, the conspiracy genre. The only genuine popular hit I can think of which seems to be doing anything particularly new with the scenario now is Homeland, which opened with genuinely interesting premise of interrogating the ‘war on terror’ a psychological level as a question of internal paranoia rather than just ticking time-bombs (though I ended up quite disappointed with how it progressed, the series seeming to lapse into all the most obvious plot twists). I feel that, as a generalisation, contemporary spy fiction may now be caught up in that ambivalence, unsure whether to keep pursuing the ‘war on terror’ theme, or whether to look to the emergence of a new Cold War scenario with a more substantial superpower opponent.

4. Which spy authors of the past do you think have the most pertinence to today’s espionage challenges?

Well in a certain sense, none really, as it’s a genre whose texts are almost always rooted in very specific cultural and geopolitical contexts that don’t generally recur. Whilst George Lucas might be able to replace the special effects in the old Star Wars films in an inexplicable effort to disguise the fact that they were made in the 1970s and 1980s, there’d be even less point to doing that with, say, the film of You Only Live Twice when everything about its narrative only really makes sense in the post-Cuban Missile Crisis Cold War. ‘Serious’ spy fiction of the era like John Le Carré’s novels remain relevant as cultural artefacts simply through being very good books, but are still rooted in very specific moments in British cultural and political history.

Of course we might very well be heading into a new Cold War, but as far as popular fiction is concerned it seems likely to be a very different prospect than the old one. Without anyone articulating an equivalent to Soviet Communism, it seems potentially a sort of post-ideological version that no longer even pretends to be about grand visions for how human society should be organised. This would really require new stories, and I wonder if they could ever be as rich. What made the original Cold War such an effective backdrop for spy fiction was its gloriously high-concept premise with the constantly lurking undertone of Dr Strangelove-style absurdity.

Perhaps the biggest challenge for spy fiction in the modern age is actually something which has been of great benefit to real intelligence agencies, the rise of surveillance technology. Back in the 1960s ‘pop’ era of espionage, the gadget was a tool that extended the agency of the agent, but in recent decades it increasingly feels like its supplanting that agency; after all, it’s hard to maintain the romantic individualism that had previously been a key characteristic of agents like Bond when the boss can call you on your mobile at any time. I was particularly struck by how Skyfall presented an anxiety about the possibility of the Qs of the world supplanting Bond and threatening to make him redundant, against which he had to reassert his value as a ‘blunt instrument’. When Sean Connery’s Bond was the original champion of the espionage gadget, it’s strange to see Daniel Craig’s Bond put in the position of basically complaining about these kids with their iPhones.

Part of the old Le Carré anxiety was the potential for characters in the intelligence world to be utterly consumed by the deadening institution, and now there seems an ever-growing technological component to that, which poses huge issues for the question of individual agency. The stereotype of real-life intelligence these days seems increasingly to be people of sitting in offices monitoring phone-calls and CCTV, whilst the real ‘blunt instruments ‘are found in drone warfare, none of which is terribly romantic according to the 20th century ideal of spy fiction.

Of course as long as Bond, Bourne or Mission: Impossible films make lots of money there’ll always be an incarnation of the modern spy thriller finding a heroic path through this.  But it seems to me significant that several of the Bond revival novels of recent years have favoured setting the character back in his original Fleming period. It makes me wonder if there’ll be an ever-growing divide between modern technologically-focused spy thrillers, and a ‘classic’ form of the genre which will become, as with something like the Western, tied to a very specific context in the past.

Joseph is an Associate Fellow in the Department of Film and Television Studies at the University of Warwick and was awarded a PhD in 2014 for his thesis which provided a history of spy and conspiracy dramas on British television. He has published articles in the Journal of British Cinema and Television and the Journal of Intelligence History and is currently authoring a book entitled Paranoid Visions: Spies, Conspiracies and the Secret State in British Television Drama.

Visit the Spying on Spies website | Register for the conference here

This event is sponsored by the Humanities Research Centre at the University of Warwick.

3 thoughts on “Interview with Joseph Oldham; Spying on Spies Conference”