This month we kick off a 7-part series by 7 writers inspired by Ian Fleming’s ‘Seven Deadlier Sins’.

In his foreword to the book The Seven Deadly Sins, published in 1962; Fleming declared that the traditional seven deadly sins — PRIDE, ENVY, ANGER, SLOTH [accidie], COVETOUSNESS, GLUTTONY and LUST — were no longer sufficient. Thereupon, he proposed seven deadlier sins more worthy of a one way ticket to Hell, which were:

“Greed, for lack of a better word, is good. Greed is right. Greed works. Greed clarifies, cuts through, and captures, the essence of the evolutionary spirit. Greed, in all of its forms; greed for life, for money, for love, knowledge, has marked the upward surge of mankind and greed, you mark my words, will not only save Teldar Paper, but that other malfunctioning corporation called the U.S.A.”

So said Gordon Gekko (Michael Douglas) in Oliver Stone’s 1987 WALL STREET, a quotation boiled down in promotional trailers to the simple “Greed is good.” Obviously, this fictional character didn’t speak for himself alone. In the USA, for example, there are political forces who champion the unfettered greed of corporations, investors, and the rest of the so-called “1%” at the top of the economic food chain. As Benjamin Pratt put it, a chasm exists between that 1% and the rest of us “partly because we celebrate greed as a sign we are winning in the American system.” (Pratt) Ironically, many of those who describe themselves as being conservative claim greed is not only good, but also wedded to fundamentalist Biblical principles. This ideology, of course, rather ignores verses like Matthew 1:9 which tells us, “It is easier for a camel to go through the eye of a needle, than for a rich man to enter the kingdom of God.” Or “For the love of money is a root of all kinds of evils.” (1 Timothy 6:10) Well, most of us, it seems, would prefer to accumulate what earthly treasures we can and take our chances with St. Peter at the Pearly Gates.

Of course, few would claim obtaining financial success is necessarily sinful. Without any question, neither Ian Fleming nor his most famous creation had any problems with wealth, especially the trappings of it. In stories spun out on a gold typewriter, James Bond was conspicuously comfortable in private clubs, on yachts, and, most famously, playing high-stake card games in world-class casinos. From the beginning, observers noted the literary 007 was a walking symbol of conspicuous consumption, a man relishing the finer things in life from international cuisine to the best hotels. Considering his job description, he had to be. For his foes were typically the most rich and powerful opponents on the planet. To deal with these nasties, A secret agent needed to be able to mix and mingle in these exclusive circles. As Fleming wrote in the opening lines of Live and Let Die,

“There are moments of great luxury in the life of a secret agent. There are assignments in which he is required to play the part of a very rich man. Occasions in which he takes refuge in good living to efface the memory of danger and the shadow of death.”

Still, the high-life was essentially drawn from Bond’s expense account as greed simply wasn’t one of 007’s many sins. As he told Marc-Ange Draco in On Her Majesty’s s Secret Service,

“Too much money is the worst curse on anyone’s head.” Perhaps Bond knew he was paraphrasing 1 Timothy 6:9 which reads, “But those who desire to be rich fall into temptation, into a snare, into many senseless and harmful desires that plunge people into ruin and destruction.”

So when Mr. Bond took up his lance to battle the “UnGodly,” as Simon Templar would put it, it was rarely pure avarice he was fighting. Rather, he was taking on criminals who wanted to obtain their wealth by unsavory means or use their wealth to accomplish ungodly ends. Some extorted the major powers of the world or engaged in smuggling enterprises like the Spangled Gang in Diamonds Are Forever. Villains like Le Chiffre or Mr. Big were criminals whose talents were in service to the Soviet bloc. Dr. No had a partnership with Russia, but his mania was ruling over his strange private kingdom. Sir Hugo Drax and Ernst Stavro Blofeld went to great lengths to obtain wealth, but their motives were far darker than merely storing up filthy lucre. But there was one adversary who indeed personified avarice.

“We are the only two authors who write about what people are really interested in–cards, money, gold, and things like that.” (Ian Fleming to W. Somerset Maugham)

When we’re introduced to James Bond in the opening pages of Casino Royale, we meet a secret agent bank-rolled to impersonate a Jamaican millionaire. The first sentences of the first chapter read:

The scent and smoke and sweat of a casino are nauseating at three in the morning. Then the soul erosion produced by high gambling, a compost of greed and fear and nervous tension becomes unbearable, and the senses awake and revolt from it.

Ironically, one witness to Bond’s cleaning out of Le Chiffre in Casino Royale was millionaire Julius DuPont, the man who would introduce 007 six years later to Auric Goldfinger. True, like Le Chiffre and Mr. Big before him, Goldfinger was in the employ of the Russians. But his drives went far beyond, or below, ideology. As Raymond Benson reminds us:

“Goldfinger was written at Goldeneye in January-February in 1958. This is the longest of the Bond novels, with an original typescript of 270 pages. Its working title was The Richest Man in the World, and the first draft was only moderately changed.”

But saying Goldfinger wanted to be the richest man in the world is putting it mildly. As Tilly Soames told Bond, Goldfinger had a woman once a month painted in gold so he could “possess gold, marry gold.” Goldfinger’s greed runs so deep that he is driven to cheat at minor canasta games and golf. Most telling of all is Goldfinger’s speech to 007. With a look “almost of rapture,” Goldfinger says:

“Mr. Bond, all my life I have been in love. I have been in love with gold. I love its colour, its brilliance, its divine heaviness. I love the texture of gold, that soft sliminess that I have learnt to gauge so accurately by touch that I can estimate the fineness of a bar to within one carat. And I love the warm tang it exudes when I melt it down into a true golden syrup. But, above all, Mr. Bond, I love the power that gold alone gives to its owner the magic of controlling energy, exacting labour, fulfilling one’s every wish and whim and, when need be, purchasing bodies, minds, even souls. Yes, Mr. Bond I have worked all my life for gold and in return, gold has worked for me and for those enterprises that I have espoused. I ask you,” Goldfinger gazed earnestly at Bond, “is there any other substance on earth that so rewards its owner?” (p. 135)

One of the first critics of the world of 007, O.F. Snelling, noted the character of Goldfinger was so over-the-top that it easily led to numerous parodies. (note 1) Snelling summarized Goldfinger by saying:

Auric Goldfinger stands about five feet high, and so much of him is out of proportion that he looks as though he has been put together with pieces of other people’s bodies . . . Everything about him is either golden or reddish-yellow: his name, his sun-tanned skin, the carroty hair on his head and the orange hair on his chest Even the car he runs is a bright yellow . . . He wants to be the richest man in history and he sets himself a pretty hard task in order to fulfil this ambition. One sometimes hears a very apt remark from Americans, when they are referring to a seemingly impossible feat: For it would be like trying to rob Fort Knox.’ Goldfinger attempts exactly that! (111)

This attempt, in the view of Benjamin Pratt, is what elevates Goldfinger to a mythic status.

“Goldfinger is a compact package of potent greed and lust—a personification of affluenza, the excessive desire to consume money, power, people and goods. Goldfinger envisions himself in the world’s leading ranks of mountain climbers, deep-sea explorers, astronauts and scientists. He boasts that his crime at Fort Knox will be considered a mark of genius around the world for centuries to come. It is the titanic scale of this crime that finally lifts Bond’s struggle onto the mythic stage: a St. George locked in a battle to the death with the Devil.” (Pratt)

Further, Pratt believes that when Bond and Goldfinger lock into hand-to-hand combat, choking each other, we are seeing “a potent metaphor for us today, isn’t it? Perhaps more than any of the other deadly sins, avarice has us by the throat.” (Pratt) 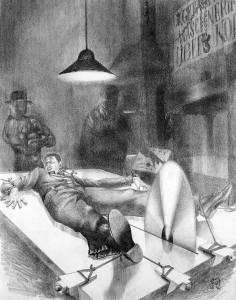 So, when we think of Fleming and greed, Auric Goldfinger will always be, well, the gold standard of avarice. (note 2) How would Fleming handle that deadly sin today? Perhaps we’ll get a glimmer with Anthony Horowitz’s upcoming Trigger Mortis. That continuation novel not only picks up where Goldfinger left off, but Pussy Galore makes her literary reprise. But in 2015, becoming “The Richest Man in the World” would require much more than a glorified bank heist, at least without using hacker skills. In a sense, we live in a world of Goldfingers whose greed may not be overtly criminal, but often just as ungodly. For example, the Catholic Church considers the commandment on coveting in Deuteronomy 5:21 and Exodus 20:17 to prohibit greed and focusing one’s heart on material possessions. Beyond religion, the idea that “greed is good” is questionable in many quarters. Studies have shown that with wealth, there is a drop in compassion for others. (Grewal) Motives for obtaining wealth are often ascribed to status, selfishness, and especially envy. Few would claim wealth buys happiness. Except Auric Goldfinger and the likes of Gordon Gekko.

For decades, many have said James Bond is a fantasy figure for both men and women. Perhaps, truth be known, becoming the richest man, or woman, in the world is our real fantasy. Or at least being in the coveted 1% by hook, crook, or occasionally true individual enterprise.

The Spectre of Accidia: Bond and Fleming’s Greatest Foe