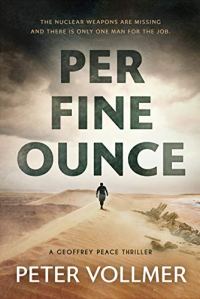 Glidrose Productions (now Ian Fleming Publications) planned for a series of James Bond novels to be published under the pseudonym of Robert Markham. Celebrated South African novelist and award-winning Sunday Times correspondent Geoffrey Jenkins was asked to write an original James Bond 007 novel in 1966, following on from The Man with the Golden Gun.

Ian Fleming wrote at the time, “Geoffrey Jenkins has the supreme gift of originality. A Twist of Sand is a literate, imaginative first novel in the tradition of high and original adventure.”

Jenkins and Fleming talked about a diamond-smuggling storyline based in South Africa, which Jenkins penned for Glidrose entitled “Per Fine Ounce“. Despite a promising Bond storyline, and the fact that Jenkins was a best-selling thriller writer in the Fleming mould, for some undisclosed reason Glidrose Productions rejected Jenkins’ manuscript after Fleming passed away. Many have speculated over the years as to why the manuscript was never published and “lost” by Glidrose.

Original extracts of this manuscript are published in the foreword of this book with the permission of David Jenkins, the son of Geoffrey Jenkins who penned the original “missing” manuscript.

In Peter Vollmer’s version of “Per Fine Ounce“, Commander Geoffrey Peace, an ex-Submarine commander is seconded to MI6 and sent undercover to South Africa to check on an ultra-right-wing Afrikaner group who are active in gold-mining and thought to have a gold bullion shipment en route to Britain. This group have acquired nuclear weapons before those in the South African arsenal were dismantled. MI6 have reason to believe these weapons have been secreted away in a mine in the desert.

Buy “Per Fine Ounce” on Amazon

2 thoughts on “The New ‘Per Fine Ounce’ by Peter Vollmer”