Philip Larkin is perhaps was the first critic to connect Major Smythe to Fleming, and at first glance, Smythe’s similarities to Fleming are many and obvious. Both are in their mid-50s and dealing with a sagging belly, heart trouble, and a soured marriage. Either could be described as “the remains of a once brave and resourceful officer and of a handsome man who made easy sexual conquests all his military life.” Both men are propped up by pills and lost in a melancholy fog of drunkenness.

Though “still a fine figure of a man at a cocktail party,” Fleming/Smythe is “in the process of drinking himself to death,” having been eaten away by the “termites of sloth, self-indulgence […] and general disgust with himself [that] had eroded his once hard core into dust.”

Both men have found success, only to realize that it tastes like ashes. Having arrived “at the frontier of death wish,” they live in a state of profound accidie, the sin Fleming knew best and hated most. Smythe is “bored to death, and, but for one factor in his life, he would long ago have swallowed the bottle of barbiturates he had easily acquired from a local doctor.” A decade after “Octopussy” was published, Caspar Fleming took his life with the same drug.

Smythe and Fleming both adore Jamaica for being “a paradise of sunshine, good food, cheap drink, and a glorious haven from the gloom and restrictions and Labour Government of postwar England.” Each has a small villa, from where they swim daily, finding a refuge from daily life in the underwater world and its denizens. Major Smythe even considers becoming an author, though in far more heinous circumstances.

When Bond confronts Smythe and awkwardly gives him a chance to commit suicide, one recalls John Pearson‘s assertion that 007 drove his creator into the grave–Fleming having also decided “to oblige the Bond man.” Such is the association one is tempted to create between Smythe and Fleming. But let’s remember Conan Doyle‘s poetic request to an uncomprehending critic:

So please grip this fact with your cerebral tentacle
The doll and the maker are never identical.

Unlike Ian Fleming, Major Smythe was a genuine man of action. The Miscellaneous Objectives Bureau (MOB) is a clear analogue for Fleming’s “Red Indians”, the 30 Assault Unit, but this more closely links Smythe to the commandos that inspired Bond, rather than Bond’s creator. What’s more, Smythe betrays his country, becoming a “cop turned robber.” In “Octopussy” Fleming always identifies the charcater as “Major Smythe”—a reminder of the rank he so vilely abuses.

That is not the only reason to believe that Fleming despised Smythe. “Throughout all Bond’s adventures nobody English does anything evil” wrote Kingsley Amis in The James Bond Dossier. “Octopussy” seems to be the exception to the rule…until we remember why Smythe spoke excellent German: his “mother had come from Heidelberg.” Aha! Not fully British after all!

As anyone familiar with Fleming’s world knows, any sign of German ancestry signifies inherent evil (as in the “American” Milton Krest). The only good German in the Bond books is actually an Austrian–Hannes Oberhauser, who Major Smythe treacherously shoots in the back, before ironically justifying the deed with very British bigotry (“After all, it was only a bloody Kraut.”)

Oberhauser is a parental-figure to the orphan Bond: “He taught me to ski before the war, when I was in my teens. He was a wonderful man. He was something of a father to me at a time when I happened to need one.” And he is clearly based on a father-figure of Fleming, Ernan Forbes Dennis, who tutored the teenaged, fatherless Fleming in Kitzbühel–the same town Oberhauser hails from. Fleming revisited it throughout his life. “He clings to youth and dreams of the days when he was the Kitzbühel Casanova,” Ann Fleming wrote to Evelyn Waugh in 1961, while vacationing there with her husband.

Smythe defiles Fleming’s beloved town with his crime. He marches into Kitzbühel, abuses his authority, and murders Bond and Fleming’s father figure. After such knowledge, Major Smythe’s similarities to Fleming begin to fade. With his MOB background, one might be tempted to call Smythe a James Bond gone to seed, but even that is dispelled when Fleming brings in the “real” Bond–who, as it turns out, shares Fleming’s background. The autobiographical resonance in Smythe is ultimately transferred to Bond. “Octopussy” is more than a self-portrait of its author in decline. As in The Spy Who Loved Me, Fleming artfully draws on his life, reworking and distributing his memories, attributes, and experiences among multiple contrasting characters. That’s what authors do. 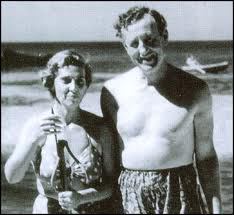 “Octopussy” makes use of three of Fleming’s great interests–gold smuggling, the underwater world, and physical pain. The last two are combined in Major Smythe’s agonized trek to feed Octopussy after his scorpion fish encounter. She becomes an instrument of vengeance, not just for Oberhauser but for Smythe’s betrayal in offering her a deadly meal. Sadly, Octopussy’s own fate is to be brutally killed and eaten by the Jamaicans who find Smythe’s body…

“Today we ate saffron rice with octopus conch and lobster, caught by me; I was sad about the octopus, the entrance to his lair was scattered with exquisite seashells, he had eaten the contents and was holding them with his tentacles as a protective front door. I prized them from him one by one, put them inside my bathing dress, put both hands in the hole and with tremendous courage pulled and pulled, he poured forth black ink which strengthened my resolve, I was the stronger and collected him at the cost of a few scarlet railway lines round the wrist.”

Ann Fleming’s letters suggest that Octopussy was based on the octopuses (or “octopdes,” according to Waugh, who chided Ann for using “octopi”) that lived off Goldeneye. Though Mary died before Major Smythe, it was Ian who predeceased Ann. Her involvement in readying the story for posthumous publication led to Waugh teasingly addressing her as “Octopussy” in his letters. It was a light note in the otherwise onerous process of dealing with 007’s legacy, since Ann had loved Fleming and hated Bond. It was another octopus that brought Ann solace, as shown in a letter from 1969:

“I am very out of touch, and will write a better bulletin soon: depression is in the ascendant, induced by having to pass what Kingsley Amis has written about Ian for the Dictionary of National Biography, and being assailed by the BBC for material for the Omnibus programme they are doing on Ian – I want to kick them all and burst into tears. Improbably, the Beatles have put my quandary into words – a song that goes

How do the Beatles know octopuses have gardens?
I thought only I knew that, there must be more to them than meets the ear.”

The Letters of Ann Fleming