n 1967, this rare Playboy article was written by famous children’s author Roald Dahl. Dahl in fact, worked with Ian Fleming in the BSC during WW2 with the secret intelligence group informally known as The Irregulars. According to Donald Sturrock, author of Storyteller – The Life of Roald Dahl:

“[Roald Dahl] had known Ian Fleming well. Both men had worked in espionage for William Stephenson during the war, and both had similar reputations as hard-drinking, gambling, womanizing sophisticates … He admired Fleming. He thought him one of the few writers worth meeting … But he was less enamoured of his friend’s writing skills, describing You Only Live Twice variously as ‘tired’, ‘bad’ and ‘Ian’s worst book’.”

A Pictorial Essay BY ROALD DAHL:

. Not that Bond is going soft: The movie’s rewrite of 007 history calls for Sean Connery to marry Kissy—in a traditional Shinto ceremony (below)—out of affection not for her but for Her Majesty’s Secret Service. In 67 domestic films since signing with Tokyo’s Toho Studios, Mie has earned the sobriquet “the Brigitte Bardot of Japan” and a reputation as the most photographed girl in the Orient.

In his latest cinematic sortie, “You Only Live Twice

” the irrepressible, indestructible and irresistible James Bond 007 cements east-west ties in the way he knows best.

“A man called broccoli wants you on the telephone,” Pat said.

I had never in my life heard of anyone with a name like that. “It’s Archie Lockley,” I said. “Lockley. ‘try to say it properly.” She still had occasional trouble with names.

“This one is Broccoli,” she said. “Head of the Mafia. You’d better watch out.”

I took the phone. A quiet voice said, “Would you be interested in writing the next James Bond film?”

“Could you come and see us today? We’re in a bit of a hurry,”

“You can come up with anything you like so far as the story goes,” they told me, “but there are two things you mustn’t mess about with. The first is the character of Bond. That’s fixed. The second is the girl formula. That is also fixed.”

“What’s the girl formula?” I asked.

“There’s nothing to it. You use three different girls and Bond has them all.”

One of them took a deep breath and let it out slowly. “How many Bond films have you seen?” he asked.

“Just one. The one with the crazy motorcar.”

“You’d better see the others right away. We’ll send them out to your house with a projector and someone to work it.” This was the first small hint I was to get of the swift, efficient, expansive way in which the Bond producers operated. Nobody else does things quite like them.

“So you put in three girls. No more and no less. Girl number one is pro-Bond. She stays around roughly through
the first reel of the picture. Then she is bumped off by the enemy, preferably in Bond’s arms.”

“Wherever you like, so long as it’s in good taste. Girl number two is anti Bond. She works for the enemy and stays around throughout the middle third of the picture. She must capture Bond, and Bond must save himself by bowling her over with sheer sexual magnetism. This girl should also be bumped off. preferably in an original fashion.”

“There aren’t many of those left,” I said.

“We’ll find one,” they answered. “Girl number three is violently pro Bond. She occupies the final third of the picture. and she must on no account he killed. Nor must she permit Bond to take any lecherous liberties with her until the very end of the story. We keep that for the fade-out.” 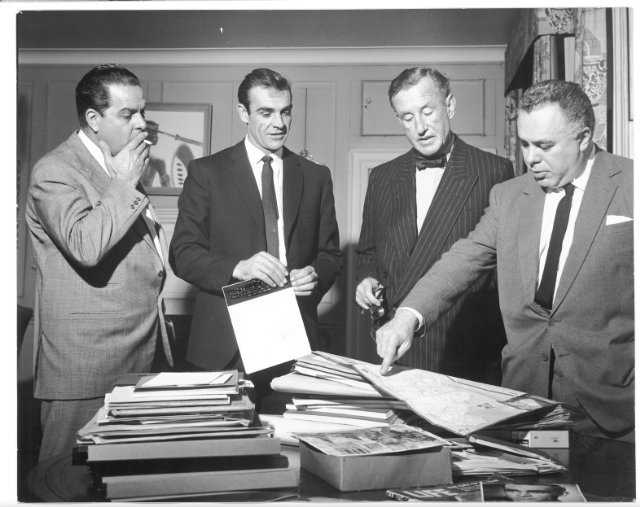 All this may sound a bit childish, but the fact remains that the Broccoli/Saltzman formula was a very sound one. The three girls, properly spaced out through the story, gave a nice sexy balance to this curious charade, a sort of beginning, middle and end, with a welcome change of girl in each section.

Girl number one (in the first third) was played by Akiko Wakabayashi. Everyone liked Akiko. She was gay and gentle and virtuous; and we were all sorry when she had to be murdered and sent home. We had her killed in bed, with Bond alongside her, while they were sleeping it off. The manner of the killing was interesting and complex—a sly, silent Japanese method that involves a long length of cotton thread and a tiny little bottle.

Girl number two. the anti-Bond bitch, was played by Karen Dor, a well-built actress from Germany, and it is with her that Bond demonstrates his incredible sexual magnetism. Her henchmen have captured him, and she has him all to her self, trussed up like a turkey, tied hand and foot, with no gun in reach, no weapon—no inanimate weapon, anyway—nothing but his own magnificent body. The girl advances upon him with an instrument known as a dermatome. This works rather like a super safety razor and is employed by plastic surgeons for shaving off very thin layers of skin. By intelligent use of this instrument, the villainess feels fairly confident that she can make Bond talk. But as she gets close to him—and this is what I like so much about old Bond—as she bends over him, the instrument poised for slicing, he gives her a look of such piercing salacity that the poor girl begins to twitch and dribble with desire— and off we go again. 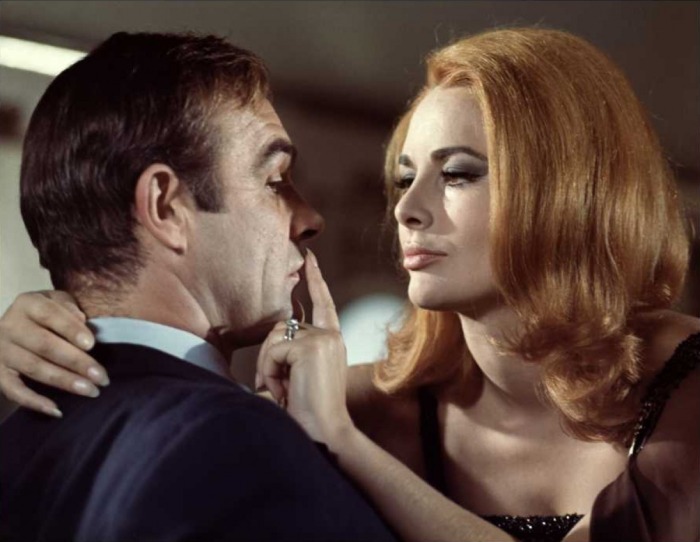 Don’t knock this. It’s good stuff. It is the Mitty dream of every heterosexual male that he should be able to melt a woman in this manner. In fact, Bond himself, in all his escapades, is the biggest Mitty dream there’s ever been. He is also the best, and the reason he’s so good, so much better than all the other comic-strip men of action we see around us is that he’s thoroughly believable. Make no mistake about it, the things you see him doing on the screen are actually carried out in real life before the cameras. They’re not faked.

Girl number three is played by a long-stemmed Japanese peony called Mie Hama. She had a rough time shooting the end sequence in the terrible heat off the volcano coast of southern Japan, and once she passed out cold and had to be rushed home by speedboat and helicopter. But she came back for more, and under the sizzling sun, pouring with sweat, she and Bond went into the final clinch and the director said. “Print it . .

When Hama and Wakabayashi first arrived in England and appeared on the set, a great number of experienced rapscallions in the unit licked their lips and began to make lascivious plans. But all were thwarted. The girls were constantly surrounded by such a retinue of protectors and interpreters that nobody, not even the sliest seducer in the place, got a look in. Once, in a Japanese hotel in Kagoshima, I went into Mie Hama’s suite at her own request in order to help her with some new lines of dialogue. I hadn’t been in there 40 seconds when a side door opened and a sort of female Cerberus entered and positioned herself between me and the maiden. I imagine she was armed.

Roald Dahl – The Spy Who Loved Me (The Telegraph)