The Diamond Smugglers is the true story of an operation responsible for smuggling millions of pounds worth of precious gems out of Africa. Ian Fleming, creator of James Bond, drew on interviews with the reluctant hero of the diamond companies’ counter-attack to explore the world of the real master criminals of his time. The result rivals Fleming’s greatest spy novels.

Fleming’s interest in the whole diamond smuggling affair had been piqued while researching for his novel Diamonds Are Forever. Under a pseudonym, John Blaize was Fleming’s ‘our man in’ South Africa, providing all the back story and details of the trade and Fleming came to much admire him:

“I admire professionals and Blaize was a professional to his fingertips. More important, he had those qualities which one likes to find in one’s compatriots-courage, humor, imagination, common sense and a warm heart. It had been odd to find these qualities in a spy” 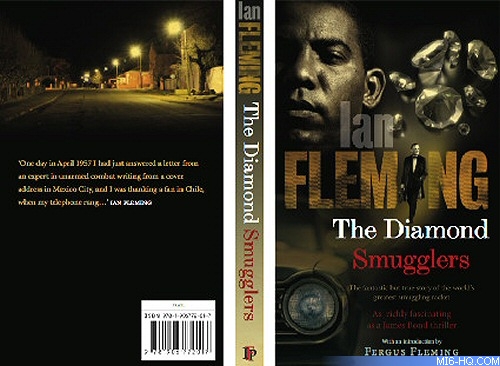 “Spies are trained to keep their mouths shut and they don’t often lose the habit. That’s why true spy stories are extremely rare, and personally I have never seen one in print that completely rang true. Even in fiction, there is very little good spy literature. There is something in the subject that leads to exaggeration, and the literary framework of ‘a beginning and a middle and an end’ doesn’t belong to good spy writing, which should be full of loose ends and drabness and ultimate despair. Perhaps only Somerset Maugham and Graham Greene and Eric Ambler have caught the squalor and greyness of the Secret Service.”

One thought on “‘The Diamond Smugglers’ Dust Jackets”