Without a doubt, From Russia, With Love (1957). It is the first and best of the Chopping illustrations which introduces many of the familiar elements of his trompe l’oeil designs; the wood-grained background, a floral motif (in this case a blood-red rose with a single dew drop), a handgun and the ‘tea chest’ stencil lettering which features on all subsequent Chopping Bond covers except For Your Eyes Only. It is also significant for displaying just the author’s surname on the front cover- a particularly bold statement at that time.

Yes. I curate the Ian Fleming Bibliographical Archive which includes all the UK and US first editions in all their various issues and states, as well as many inscribed books, advance copies, export and review copies and uncorrected proofs.

The collection runs to some 3000+ Ian Fleming-related items and does not even cover the film-based material. There are very few gaps now, but I long for a copy of The Black Daffodil to surface. This was a pre-Bond volume of poetry which embarrassed Fleming so much that he had all copies destroyed; there are no recorded survivors, but one has to live in hope…

I read all the novels and short stories in order of publications in the late ’80s. I re-read them every so often (it’s my job, after all) and I have many favourites. Casino Royale is a strong debut novel, and From, Russia With Love is Ian Fleming’s most plausible espionage thriller. I am also a great admirer of the author’s short fiction, particularly Quantum of Solace and Octopussy (strangely, Bond is hardly involved in both of these).

I greatly admire the X series designs by or after Raymond Hawkey, which ran throughout the 1960s. The typography is legendary and the success of the series was phenomenal; the sale figures speak for themselved and Hawkey deserves great credit for this. As an artist, he was just as important to the literary Bond branding as Richard Chopping was.

There are countless other great reprints and reissues but I would highlight the ‘dark’ Coronet series from the mid-90s; from a bibliographical standpoint some of these are quite scarce [the ‘knife’ cover Dr No and Colonel Sun] which adds to the appeal.

Jon Gilbert manages the Ian Fleming Bibliographical Archive and joined Adrian Harrington Ltd. straight from University in the ’90s. He is responsible for much of the stock acquisition, and over a five year period has assembled the most bibliographically comprehensive archive of Ian Fleming material, which has informed the definitive study of the author’s published works from 1952-date, described as ‘magisterial’ by Ian Fleming’s nephew, the celebrated travel writer Fergus Fleming. 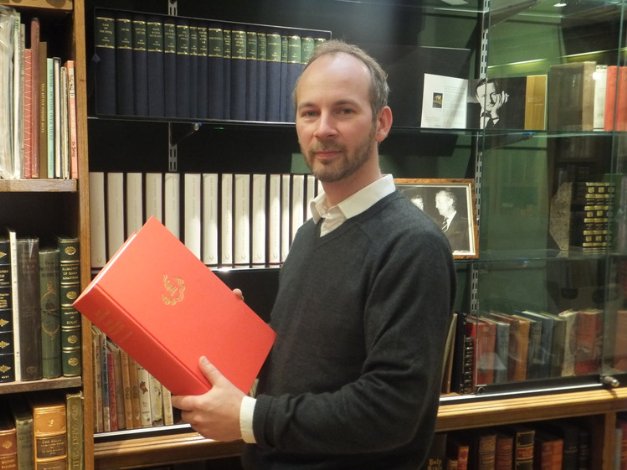 The ILAB Breslauer Prize for Bibliography, given every fourth year to the most outstanding scholarly book about books and worth $10.000, is one of the most prestigious prizes in the field of bibliography and was recently awarded the 16th prize to Jon!

Learn more about the Bibliography here