Vintage Classics and Bentley Motors have united to create a luxury special edition of Casino Royale to mark 60 years of Bond.

“When it came to cars Fleming really knew his stuff… he must have known that the fabulous pre-war Bentleys won at Le Mans four years in a row from 1927-30.” 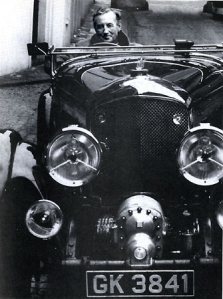 Ian Fleming was a huge admirer of the Bentley and introduced this notion in Casino Royale:

“Bond’s car was his only personal hobby. One of the last of the 4 ½ litre Bentleys with the supercharger by Amherst Villiers, he had bought it almost new in 1933 and had kept it in careful storage throughout the war… Bond drove it hard and well and with an almost sensual pleasure.”

Bond owned three Bentleys in the course of the fourteen original novels and Fleming described in detail a modified Bentley R type in Thunderball and On Her Majesty’s Secret Service which Bond loving called ‘the Locomotive’.

Just 500 copies will be produced, each costing £750. This collector’s item will be on sale from 1st November exclusively from Random House, and is available to customers globally, excluding the USA and Philippines.

One thought on “From Bentley, With Love: ‘Casino Royale’ Bentley Edition”