Hi, and thanks for having me. I think it has to be Goldfinger, with the skull holding the rose between its teeth and gold coins in its eye sockets. I’m not sure it entirely fits the mood of that novel, which apart from Bond’s feelings in the opening is often a fairly jolly affair, and it might have suited On Her Majesty’s Secret Service better (without the coins, perhaps), but it’s just such a wonderful piece of art. There’s something timelessly macabre about it, and it also has the element of the bizarre, which much of Fleming’s work did.

I have a few first editions of other authors, such as Adam Hall, but no Flemings, unfortunately! I wish I did. 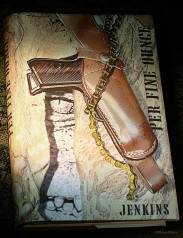 I perhaps have an odder wishlist than most as, while I hugely admire the artwork of many of the editions, I’m not a collector and am happy with my old beat-up Pan paperbacks. What I’m interested in is unpublished material by Ian Fleming or relating to James Bond. I’ve unearthed some bit and bobs already – a few draft pages of Per Fine Ounce, the lost Bond novel by Geoffrey Jenkins; a screenplay of The Diamond Smugglers by Jon Cleary, and John Collard’s orginal manuscript for his version of that book; and various drafts of Casino Royale by Ben Hecht – but I’m sure there’s more out there.

There are some intriguing references to various film treatments and scripts by Ian Fleming, including for Moonraker, The Diamond Smugglers and Casino Royale, and along with the completed draft of Per Fine Ounce I’d love to read all of those.

[Below is the opening of Fleming’s chapter in The Kemsley Book of Journalism, courtesy of Jeremy]

4. When did you read your first Bond novel and what was it?

It’s been a fair few years now, but I think it was Icebreaker by John Gardner, which I was given for my, I think 12th, birthday by an older cousin who had noticed that I’d started enjoying the films. I remember being particularly intrigued by the text on the cover, which said ‘Ian Fleming’s Master Spy James Bond in Icebreaker by John Gardner’. I hadn’t even realised there were novels about James Bond, but this formulation suggested a whole history I had no idea about. I enjoyed the book, but didn’t read any more Bond novels for a couple of years, when I tried something by Ian Fleming I found at school, which I didn’t enjoy.
I tried reading Fleming again in my early 20s, and still didn’t enjoy him, finding the prose stilted and his attitudes dated. But then I read Casino Royale and something clicked and, faults and all, I fell in love with Fleming’s books.

5. What is your favorite Fleming Bond novel?

Probably Casino Royale, because I think it contains the strongest solution of the James Bond character. This is often the case with writers’ first novels, I suspect, but for me Fleming never quite matched the intensity and purity of atmosphere he managed to capture in Casino Royale, and Bond already faces his toughest test, both in the torture and his being betrayed by the woman he wants to marry. It’s a peculiar and rather disturbing book, a fever dream as John Pearson called it, and Fleming really takes you in to the sweat and fear of that casino. I also love his short stories, and my favourite of those is probably Octopussy, where Fleming brought Bond into his own world of guilt and melancholy.

6. Do you have any favorite Bond dust jackets in paperback or by continuation authors?

I love the Raymond Hawkey covers, and I’ll predictably go for Thunderball, which must have lured millions of people to Fleming’s work.

I also love Frank McCarthy’s covers for Bantam in the States, particularly the one for Casino Royale, which looks like a fantastic film version of the novel.

I also rather like Bartholomew Wilkins and Partners‘ wonderfully simple design for the first edition of John Pearson’s James Bond: The Authorised Biography, which just takes his bold premise and puts it out front with no illustrations at all, and has a cheeky memorandum on the back cover with a handwritten note from Bond himself approving of the book.

Jeremy is the author of the Paul Dark spy novels,Free Agent, Song Of Treason (originally published as Free Country) and The Moscow Option.