Probably From Russia, With Love. I like the rose and the gun as the hint at what is to come within the pages of the novel.

I have a copy of You Only Live Twice, but it is without the dust jacket unfortunately. I bought it knowing next to nothing about collecting first edition books on eBay and later found out it is a second printing, further reducing its value.

A good quality first edition with dust jacket is something I can only dream of now as prices have taken them way out of my league. If I had the money I’d go for a full set, but until that point I’ll hope that prices fall!

I don’t really have one, I’m not really much of a collector. At the time of writing there is less than a week before Solo is released and I’m hoping it will be good.

I was eight when I first read my day’s copy of Casino Royale, much of which went way over my head. I do remember the end though and being upset at the death of Vesper and shocked by Bond’s “the bitch is dead now”. It’s a great way to end the book! 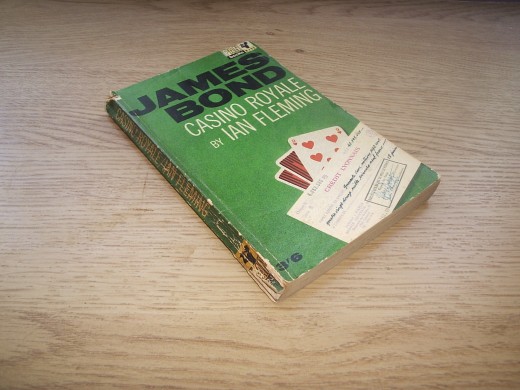 My favourite Bond novel is probably Thunderball, although I’m never absolutely sure about what tops my list – I love them all for different reasons. I love the short stories too, The Living Daylights in particular is superbly written.

I like the copy of Casino Royale I pinched off my dad, but a lot of that is for sentimental reasons I suppose. It is a 1960s pan, with a cheque set on a green background. Many of my early books were picked up second hand and so I have a random collection of paperbacks of various editions.

The first book I bought new was a 1970s Triad Panther edition of Dr No, with a girl posing on a golden gun. I also like the more recent covers done by Richie Fahey.

As far as continuation authors goes, the early John Gardner ones are good. Licence Renewed was, of course, done by Richard Chopping, but the four that followed were in a similar style.

David’s site looks at the character of James Bond, 007, the secret agent with a licence to kill.

One thought on “Field Report: David Leigh from ‘The James Bond Dossier’”