This website just celebrated its 6th anniversary and for the last 4 years we have invited readers and contributors to the site, on an annual celebratory walk and party. This free event, is our way of saying thanks and on the 27th May 2019, Artistic Licence Renewed led it’s 4th Ian Fleming-James Bond Walking Tour of London.

One of our guests was the encyclopedic Bond expert Ajay Chowdhury, who kindly kept minutes and provided us with the full de-brief below.

Timed to coincide In or around Fleming’s birthday of 28th May, this year’s tour celebrated what would have been the author’s 111th birthday. Led by BAFTA-producer Jon Pettigrew, the tour has become a calendar landmark for Fleming aficionados around the world. Indeed, this year, the tour attracted people from Japan, the US and all parts of the UK. This year, the theme was Clubland Bond and as one wended one’s way through London’s winding streets, memories of an elegant past were evoked.

Starting in the Mall | © Ajay Chowdhury

The large avenue leading to Buckingham Palace, we were led past Charles de Gaulle’s French wartime HQ and the residence of the Foreign Secretary in Carlton Gardens, adjoining the Mall. As a member of MI6, the Secret Intelligence Service whose purview is overseas, Bond’s ultimate boss would be the Secretary of State for Foreign and Commonwealth Affairs, the full title of the position.

We were then led to Pall Mall and the Reform Club. This venerable institution from where Phileas Fogg set about his plan to travel around the world in 80 days was also the partial interior of Blades, the gentleman’s club in 2002’s Die Another Day as well as the Tim Pigott-Smith’s Foreign Secretary’s office in 2008’s Quantum Of Solace. 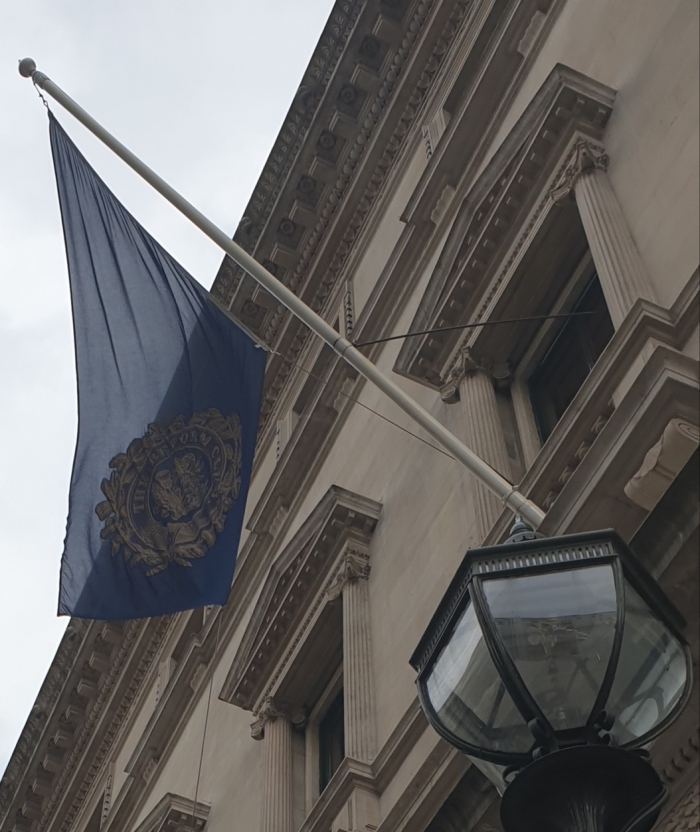 We journeyed along Pall Mall to New Zealand House, the steel and glass building occupying the site of the Carlton Hotel. It was here Fleming, and many others, were recruited to the British intelligence apparat. On hand to give the tour epicunary colour was Bond scholar Edward Biddulph, author of Licence to Cook: Recipes Inspired by Ian Fleming’s James Bond. Biddulph appraised the tour of the likely menu: standard British fayre of the time which would not be out of place at a school dinner table.

Japanophile and author of The Definitive Story Of You Only Live Twice: Fleming, Bond and Connery in Japan Graham Thomas also informed the group of the apocryphal story that future Viet Cong leader Ho Chi Minh trained as a chef at the hotel.

From there, the tour went past the National Gallery, as seen in Skyfall where Bond meets Q and through Covent Garden and its environs including, as Mr Thomas pointed out, a secret literary club, past David Niven’s club, The Garrick and Rules Restaurant where M dines in 2015’s Spectre up to the Savoy Hotel and through to Somerset House.

This establishment, overlooking the River Thames, doubled as St Petersberg in 1995’s GoldenEye where Jack Wade helps start his Russian car with a sledgehammer and is also the purported Ministry of Defence Building at the beginning of 1997’s Tomorrow Never Dies.

After trudging through Embankment Gardens and the Universal Exports exterior from 1987’s The Living Daylights at the south end of Trafalgar Square, the party ended up in a private dining room of the Admiralty Pub for a 007 literature quiz and some much-needed refreshment. Here we were joined by author and biographer, Robert Sellers. Sellers has written variously on British film and especially Bond including the definitive Thunderball saga, The Battle For Bond, action maestro Vic Armstrong’s autobiography, The True Adventures of the World’s Greatest Stuntman: My Life As Indiana Jones, James Bond, Superman and Other Movie Heroes. and the forthcoming When Harry Met Cubby, the story of the Bond producers.

Mr Biddulph took top prize in the quiz, produced below. Nothing propinks like propinquity and much conviviality was had with a very congenial crowd who lived up to Fleming’s adage: “Never say no to adventures.”

Ajay Chowdhury is the co-author of Some Kind Of Hero: The Remarkable Story of the James Bond Films out now in paperback from The History Press updated to include The Road To Bond 25.