Last year the news of Playboy founder Hugh Hefner’s death at the age of 91 caused some Bond fans to recall the connection between James Bond and Playboy – it’s a connection that my recently published book The playboy and James Bond analyses in the context of broader issues of culture and society, in the sixties and afterwards. This book is part of a wider project in academic research, which argues that Bond is an important icon and hero of popular culture and as such should be understood as meaningful.

During the 1960s in particular, the literary and screen versions of Bond made frequent appearances in Playboy, and the connections were developed when Playboy later directly appeared in the Bond films, meaning that a reciprocal relationship was formed between them to include fiction, interviews, women of Bond pictorials and other types of reference.

However, as interesting as these are to list and discuss in the book, to more deeply understand the connections between Bond and Playboy requires more than a timeline overview of appearances in print and on-screen, and it’s a question of providing the right context.

This is what makes the book’s approach to the relationship between Bond and Playboy distinctive, and the purpose is to provide something more than a list cataloguing the important dates and appearances. For this reason the book is not only structured chronologically to tell the story of the relationship between James Bond and Playboy as it played in the public sphere, but also thematically related to the era and in the context of relevant issues of culture and society, including cross-cultural reception and exchange, and paying particular attention to consumer culture and masculinity.

For the record though, two early dates are usually identified by those who observe the long association between Bond and Playboy. The first significant date is 1953, the year that coincidentally marked both the publication of Ian Fleming’s first Bond novel ‘Casino Royale’ in Britain, and Hefner’s men’s lifestyle magazine Playboy in America. The second date is March 1960, when Playboy printed the new short story ‘The Hildebrand Rarity’, marking Bond’s first appearance in the magazine.

But, these two early dates are only part of the story of the formative phases of the connection between Bond and Playboy. The coincidence that Bond and Playboy entered popular culture in the same year can be understood beyond just chance when certain comparisons are made between them; both Fleming and Hefner adapted popular literary genres of the spy thriller and the men’s magazine to respond to changing tastes of the readership in ways that were somewhat similar, both were brought into being by men who took inspiration from their own life experiences and imaginings, and both responded to (and anticipated) transformations in the social and cultural climates of Britain and America to create the Bond and Playboy image and a lifestyle fantasy.

The connection between Playboy and James Bond was cultivated in the sixties when for a period of time the literary Bond made regular appearances in the magazine, following up the publication of ‘The Hildebrand Rarity’ with five other 007 stories, including a three-part serialisation of ‘On Her Majesty’s Secret Service’ in 1963, ‘The Property of a Lady’ and a serialisation of ‘You Only Live Twice’ in 1964 and ‘The Man with The Golden Gun’ in 1965. This undoubtedly contributed to the success of Bond in America, and in return Playboy was able to make the most of Fleming’s growing literary celebrity. 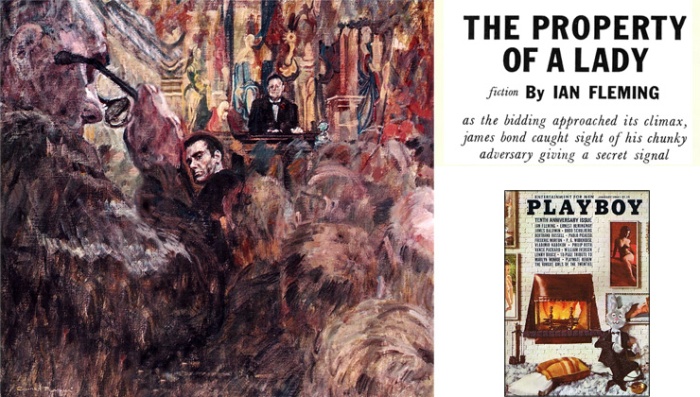 Playboy developed a public relationship with Fleming, reporting on some written exchanges about the Bond character, Jamaica as a location, and also a meeting between them when the Bond author came to Chicago and visited the Playboy building on one of his ‘Thrilling Cities’ trips. A favourite early quote from Fleming during these exchanges was that ‘‘I’m sure James Bond, if he were an actual person, would be a registered reader of Playboy.’

Broadly speaking, Playboy and James Bond reinforced the same consumerist playboy lifestyle in the 1960s, rooted in an informed appreciation of the pleasures of a range of consumer goods and entertainments, especially women. This is not without its problems of course, and both Playboy and Bond have been criticised over the years for their treatment of women in particular. Bond and Playboy undoubtedly cater to male fantasy and however problematic have done so to great success.

On the fortieth anniversary of the Playboy–Bond connection, Playboy commemorated the relationship that had begun with Fleming’s literary Bond, making a characteristically forthright claim for impact. According to the magazine, ‘Playboy and Bond defined the male mystique for the latter half of the 20th century … The clothes, the cars, the food, the gadgets, the girls, the wit, the sensual pleasure – these things matter. The enemy was not Spectre [sic] but ennui, conformity, the daily grind.’ This ambitious claim to influence in some way motivates the book’s approach, which examines aspects of the playboy image and lifestyle in relation to James Bond and Playboy.

Playboy mourned Fleming’s death in 1964 by printing an interview with him in the December issue that gave its readers the chance to grieve his loss, remember his life and pay tribute to ‘his legendary hero, 007’.

However, Fleming’s death did not yet spell an end to the appearances of Bond (Playboy serialised ‘The Man with the Golden Gun’ in 1965 and printed ‘Octopussy’ in 1966) or how he was honoured by the magazine. Readers’ letters printed in ‘Dear Playboy’ in March 1965 paid tribute to the interview with the late creator of Bond. A Playboy reader enthused that ‘Playboy Interviews continue to be one of your finest recent additions, but the December one with Ian Fleming may have topped all others in the candid insights it provided into one of the most fascinating literary personalities of our time.’

Fleming himself was also passionately admired as ‘an urbane gentleman and writer who may have had a uniquely clear understanding of himself and his world, and his status as an author’.

Another, rather more famous reader, actress Lotte Lenya, whose name would certainly mean something to any fan of the Bond films, also wrote in praise of the ‘excellent interview with Ian Fleming’. In her letter to Playboy, Lenya recalled that she had experienced a brief first-hand encounter with Fleming while on the set of From Russia with Love, in which she played the venomous SPECTRE agent Rosa Klebb.

Fleming in front of the Orient Express train, on set for From Russia With Love

However, the literary Bond was not to be forgotten by Playboy and returned to the magazine some 30 years later when Raymond Benson took over writing the Bond continuation novels in the mid-1990s to early 2000s, taking this aspect of the Playboy-Bond relationship into the new millennium.

In honour of Playboy’s ongoing connection with James Bond since 1960, the cover of the June 2000 issue that included an excerpt from Benson’s DoubleShot Bond novel asked the playful question ‘Who Says Playboy Doesn’t Believe in Long-Term Relationships?’ This joking reference to one of the most infamous components of the playboy lifestyle was used to announce the issue’s celebration that, in various forms, the Playboy–Bond relationship had already lasted forty years. Surely, this is an impressive amount of time for any relationship, let alone between these particular icons of popular culture in view of an otherwise legendary reluctance to make any such long-term commitments!

It was certainly not the first time, nor is it the last time, that Playboy magazine reminded its readership of the Playboy–Bond connection by commenting on its longevity and significance, especially in relation to times past. Nowhere is this more obvious than in the repetition of the comment apparently made by Fleming prior to his first publication in the magazine, that ‘I’m sure James Bond, if he were an actual person, would be a registered reader of Playboy.’ This is a remark that Playboy has nostalgically revisited over the years to underline the strength of its association with the Bond character; it would also suggest that Fleming himself understood the potential of the bond between them early on.

Beyond the 1960s, cultural norms have transformed, and other ideals emerged to challenge the iconic image of the playboy epitomised by James Bond and Playboy magazine, thereby raising questions about a cultural resonance that is at once bound up with the past and celebrated as timeless. Nevertheless, the Playboy–Bond connection represents a rich relationship and lifestyle fantasy that still has its fascinations and influence.

‘The playboy and James Bond: 007, Ian Fleming and Playboy Magazine’ is the first book to focus on James Bond’s relationship to the playboy ideal through the sixties and beyond. Examining aspects of the Bond phenomenon and the playboy lifestyle, it considers how ideas of gender and consumption were manipulated to construct and reflect a powerful male fantasy in the post-war era.

This analysis of the close association and relations between the emerging cultural icons of James Bond and the playboy is particularly concerned with Sean Connery’s definitive Bond as he was promoted and used by the media. By exploring the connections that developed between Bond and Playboy magazine within a historical framework, the book offers new insights into these related phenomena and their enduring legacy in popular culture.

Claire Hines is Senior Lecturer in Film and Television at Solent University, UK. She is the editor of Fan Phenomena: James Bond (published by Intellect), and has she has also contributed to a number of other collections about Bond.

2 thoughts on “A Long-Term Relationship: James Bond and Playboy”