After a period out in the cold, we welcome Gerry Wadsworth back in with his latest creation: an homage to Ian Fleming’s Cold War James Bond short story – The Living Daylights.

©Gerald Wadsworth – The Living Daylights: “Killing Time” … in which Bond’s Russian counterpart, the infamous sniper known as Trigger, prepares to assassinate British Agent 272. The agent is trying to escape East Germany by running the gaunlet of No-Man’s Land, bringing back top secret plans for a new Russian missile project. Trigger, disguised as a member of a Russian women’s orchestra, carries her weapon in a cello case, and uses the background noise of the orchestra playing Prince Igor, by Borodine, to cover up the sound of her machine gun. While Trigger waits for the agent to make his break for freedom, she bides her time in quiet contemplation – and anticipation of a successful assignment. Little does she know that Bond has her in his sights…

With a nod to master Bond book illustrator, Richard Chopping – a Green Bottle fly perches on the label of a bottle of Stolichnaya vodka. A shot glass stands at the ready for a quick quaff…killing is such a thirsty and nasty business. The weapon of choice – an AK-47 – lies at hand, cleaned, oiled, and ready to receive the sniper scope. Three of the thirty rounds of 7.62 millimetre ammunition await the deft hand of the sniper to load into the magazine.

A burled walnut (made in Russia) cigarette case, open and filled, lacks only a match to light one of the calming tubes of nicotine. A cello and bow are complemented by the score from Alexandre Borodine’s Prince Igor – Polovetsian Dances, Choral Dance Number 17. The sniper’s cover? Posing as a member of a Russian women’s orchestra.

Operation Extase has been given the green light. It’s to be a saturation job to take out British agent 272. If successful, he will end up not only dead, but strawberry jam.

The assassin? Russia has put their best sniper on the job. Code name: Trigger. 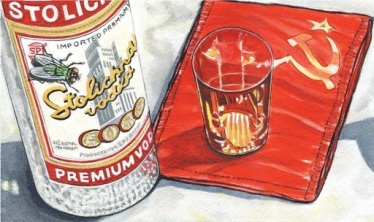 And where, we ask, is Bond? For two boring days, he was “killing time” with visits to museums, art galleries, the Berlin zoo, a film, espressos at Café Marquardt, walks around the lake, and a high tea consisting of a double portion of matjes herrings smothered in cream and onion rings, and two Molle mit Korn – the Berlin equivalent of a boiler maker and his assistant – schnapps, doubles, washed down with draught Löwenbrau.

When perched in his own snipers aerie at the corner of Kochstrasse and Wilhelmstrasse, he smoked, drank Dimple Haig and feasted on tinned food, eggs, bacon and toast. Bond would lie on his bed, engrossed in his German thriller – a dimestore paperback – Verderbt, Verdammt, Verraten*  and lose himself temporarily in the trials and tribulations of the heroine, Gräfin Liselotte Mutzenbacher. Its spectacular cover of a half-naked girl strapped to a bed was sufficient titillation for Bond on this unfortunate occasion. If nothing else, it took his mind off the nervous perambulations and annoying musings of Captain Sender – his Number 2 of Secret Service Station WB (West Berlin).

So why, we ask, was an imagined scene from Trigger’s room chosen as the painting? Precisely because it was one of those unknown knowns. A completely plausible scenario that may have taken place, not in the short story itself, but in Fleming’s own mind’s eye as he wrote this brilliant and tightly crafted thriller. I chose it as the subject matter because the very lack of detail and information made it more real and possible.

The Living Daylights is a treasure trove of visual imagery and sharply defined minutiae of our favorite British spy, James Bond. This plethora of detail makes it hard to single out a representative scene, without delving into some potentially overworked and clichéd visual. From the shooting range at Bisley using a .308 calibre Winchester experimental target rifle; to his briefing with M – whose head was sunk into his stiff turned-down collar in a Churchillian pose of gloomy reflection; from the detailed description of Berlin – that glum, inimical city dry varnished on the Western side with a brittle veneer of gimcrack polish, rather like the chromium trim on American motor-cars; to his snipers hole-up – smelling of cabbage, cheap cigar smoke and stale sweat; Fleming’s own experiences as a spy come through loud and clear. It’s a nasty job, but one that must be done well.

Add in a liberal dose of class-tinged humour taking Captain Sender to the woodshed with his old school tie – in his case, Wykehamist – and his Civil Service background, Fleming adds in the truly believable to a mix of the somewhat plausible, and serves up a crackerjack story in 26 pages.

As every story must have a romantic interest, so does The Living Daylights with Bond’s sniperscoped long-distance relationship with Trigger – unbeknownst at the time as just a girl in the orchestra. But what a girl! In classic Bond fashion, Trigger is tall, willowy, with wind-swept, molten-gold hair falling to her shoulders. Alive and vivid with movement, part of a gay, happy little crocodile. Bond ponders over the conundrum of life under the stark reality of the Soviet system and how some people were still able to find a life filled, somewhat, with fun.

Fleming’s choice of the word crocodile is also filled with double meaning.

We find it defined as the following: Crocodile: /ˈkräkəˌdīl/noun:

Irony most likely intended, Trigger is a predatory animal who uses stealth and submersion – in this case posing as part of an orchestra – to approach her unseen prey – Agent 272. Did Fleming knowingly use the word with this intent? It is just an odd enough expression that I would argue he knew exactly what he was doing and writing. The fact that he wraps it up as a column of happy women (schoolgirls), to me, clinches it.

Bond, of course, is totally smitten, stricken with a stab of grief that lances his heart in a pang of longing, something not felt since he was young. He tries to dispel this tempting visual and long-lost memory with a “get on, damn you. Get back to your job…”

But nagging at his mind is the thought, “why in hell did she choose the cello? There was something almost indecent in the idea of the bulbous, ungainly instrument between her splayed thighs.”  Whew!

Leave it to Fleming to snap the reader back into life erotique of a spy. We can have it all…bureaucratic boredom, exotic locations, intense drama and excitement, and sex. As usual, Fleming serves it all up for us in spades.

For Bond – he doesn’t get, nor kill, the girl – just the chance to scare the living daylights out of her. In his book, that was enough. In mine, too.

I chose the title “Killing Time” for the painting because of the double meaning of the words – depending upon which word is emphasized. One can, as Bond did, spend two days “killing time” or, as Trigger did, preparing for her “killing time.”

11 thoughts on “‘The Living Daylights: Killing Time’ by Gerald Wadsworth”