On Halloween of last year, Gérard de Villiers died at the age of 83. A lifelong Parisian, de Villiers was at the time eulogized for being one of the Francophone world’s most beloved spy fiction writers and the one popular novelist that French intellectuals actually read (although few would ever fess up to it). As Robert F. Worth wrote in his 2013 profile of de Villiers for the New York Times, despite being “despised by many on the French left for his right-wing political views,” de Villiers had become a sort of institution in his home country because of his seemingly unstoppable success.

Unstated in Worth’s piece is the fact that de Villiers, a bon vivant of the highest order, was also probably cherished by his contemporaries because he lived a life similar to Malko Linge, the Austrian aristocrat who freelances for the CIA in de Villiers’s long-running SAS (short for Son Altesse sérénissime, or “His Serene Highness”) series of novels. Beginning in 1965, de Villiers’s novels very quickly filled the gap left by the passing of Ian Fleming. In fact, the inspiration behind de Villiers’s transition from journalism to fiction had to do with an editor’s not-so serious challenge in the wake of Fleming’s untimely demise: “You should take over.”

Apparently that was all it took. From there, de Villiers’s incredible work rate took over, and by the time of his death, de Villiers had sold over 100 million copies and had written almost 200 spy novels. Like the Belgian detective fiction writer Georges Simenon, whose own Inspector Maigret series rivals de Villiers’s SAS catalogue, de Villiers’s output is so staggering that it’s hard to believe that he did not employ a small army of ghostwriters and researchers.

As Worth’s article makes clear, de Villiers was a one-man show who not only wrote every single word in his books, but it was also him and him alone who did all of the legwork. De Villiers’s typical routine was to travel for two weeks in the countries which invariably populate his often exotic novels, then spend six weeks writing. While these jaunts certainly provided material for de Villiers, they were nothing in comparison to de Villiers’s sources. In some ways always more of a journalist than a fiction writer (de Villiers once told an interviewer that: “I work with reality. It’s what Americans call ‘faction’”), de Villiers cultivated connections within the security agencies of many countries, especially France. The attention was reciprocated, and every profile of de Villiers makes sure to mention that he is a favorite in intelligence circles.

De Villiers’s deep links with real espionage often gave him the dual air of an “inside man” and a paperback Nostradamus. Famously, a 1980 novel by de Villiers has Islamist radicals killing the Egyptian president Anwar Sadat a full year before the event actually occurred. Despite the wear and tear of decades of writing, de Villiers’s ability to read and translate geopolitical events for his audience never waned. Six months before murder of the American ambassador J. Christopher Stevens in Libya, de Villiers’s novel Les Fous de Benghazi (The Madmen of Benghazi), which details the battle between the CIA and North African jihadis in post-Gaddafi Libya, was released. In another instance, a journalist who had been struggling for years to piece together everything concerning the assassination of Lebanese Prime Minister Rafik Hariri actually came to a conclusion after reading de Villiers’s La Liste Hariri, which includes an elaborate, yet convincing portrait of the assassination plot directed against Hariri.

While this double dose of realism is a great attraction for de Villiers’s readers, it is neither unique to the author or without problems. In the case of the latter, de Villiers once forgot to alter the name of the CIA station chief in Mauritania in one of his manuscripts. In order to appease the angry Americans, France’s General Directorate for External Security had to apologize on de Villiers’s behalf. In the case of the former, de Villiers’s way of writing is not too terribly different from Fleming (who was himself privy to some state secrets and even had a hand in the operations of the OSS, the CIA’s direct ancestor), although de Villiers often amplifies the sex, violence, and politics of Fleming’s earlier works to almost absurd levels. Especially the sex.

For instance, the opening paragraph of The Madmen of Benghazi captures a postcoital moment involving the royal Libyan Ibrahim al-Senussi and his British model girlfriend Cynthia Mulligan:

Ibrahim al-Senussi was stark naked when he stepped out of the shower, and he stopped dead at his bedroom door. Cynthia was sitting on the edge of the big bed, making a call on her cell phone. That wasn’t sexy in itself, but between the lapels of the young woman’s Chanel suit – his birthday present to her – he could see her nipples straining against the raw-silk blouse.

Within de Villiers’s overall oeuvre, this is very tame stuff. Malko Linge kiss and tells a lot, and de Villiers, in a very Gallic way, refuses to judge the Austrian aristocrat during those moments when sexual positions are discussed in great detail.

“I’ve had a lot of sex in my life,” de Villiers told Worth, “That’s why I have so much trouble with wives. In America, they would say I am a ‘womanizer.’” 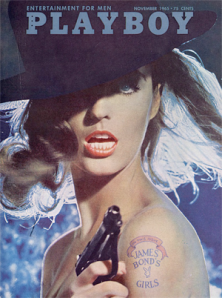 Obviously, sex has been an integral part of spy fiction ever since Casino Royale. Before Fleming, the inchoate spy fiction genre rarely dabbled too much in private matters, but Fleming blew this taboo wide open by making Bond a real Lothario. Even though the Bond novels started in the 1950s, Bond is much more a creature of the sexually liberated ‘60s (the decade that saw the first Bond feature film). And while most writers would love to be associated with slick, highly-respected literary magazines, Fleming was only too happy to be closely associated with Playboy, which not only published many of Fleming’s short stories but also continues to associate itself not only with the Bond brand, but also with the lifestyle that Fleming gave his secret agent.

Of course, there remains a significant difference between the highly stylized sexuality of James Bond and the often graphic descriptions that de Villiers favors. Even in matters concerning state security, this difference between thinly-veiled and bluntly-stated holds true. If Fleming is the preeminent stylist, then de Villiers is the king of raw reality, or at least the closest thing to it.

Even though writing is not a baton race and therefore tracking hand-offs between great writers is a wasted exercise, it’s still fun to wade in every once in a while on questions of primogeniture. In the English-speaking world, de Villiers is not and probably will never be considered one of Fleming’s great heirs. Unfortunately for the late maestro, his novels have only recently been translated into English and thus the success de Villiers wanted in America will have to come posthumously. But, despite this rather unfortunate fact, de Villiers ought to be recognized in the Anglosphere for not only his incredible diligence, but also for his contribution to the genre as a whole. In yet another analogy with Simenon, who forever altered the landscape of detective fiction without ever attaining the sentence-by-sentence quality of either Raymond Chandler or Agatha Christie, de Villiers mastered realistic spy fiction without fully exorcising the genre’s pulp roots.

In this way, de Villiers, the playboy insider with journalistic chops and a flair for conspicuous consumption, maintained spy fiction’s “cool” edge all the while reinforcing the truth that genre fiction is not mindless nor mere entertain; it can inform governmental policies and it can predict, with some success, the future.

The Spy Novelist Who Knows Too Much (NY Times)

One thought on “The French Ian Fleming? Gérard de Villiers, the Writer as Inside Man”