In 1975, he was commissioned by Albert R Broccoli to write a screenplay for The Spy Who Loved Me. Fleming’s original novel was considered unsuitable for adaptation but the title was retained with the aim of building a new story around it. Broccoli and his associates decided not to put it into production probably due to fairly outrageous elements and the script credit went to Christopher Wood and Richard Maibaum. Burgess’ script, resides at the University of Texas at Austin.

Perhaps this experience left a bitter taste in his mouth as it did for Roald Dahl, which might explain why he decide to contribute an introduction to the 1988 Coronet series of James Bond reprints.

Taken from ‘The James Bond Novels: An Introduction,’ Lugano, 1987 he states: 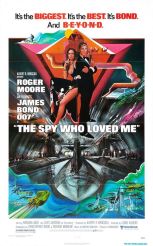 It is important, I think, to stress the point that, after the early films, whose budgets were too low to admit of too much extravagance, the James Bond whom Fleming created has only a nominal connection with the leering hero of the screen. This also goes for the titles: what has the film Octopussy to do with the brilliant short story in which Bond has a very marginal role?

It is true that Fleming forbade the film adaptation of The Spy Who Loved Me, but that was no excuse for attaching the title to a very unflemingian [sic] hotchpotch. It is time for aficionados of the films to get back to the books and admire their qualities as literature.

When Burgess was in the early stages of negotiating with Broccoli, they agreed that the book rights would remain with Burgess and that he would be free to publish a novelisation of his script. The opportunity is still there for another novelist, with the blessing of the Burgess estate, to write an espionage novel based on the materials that Burgess left behind.

Although they never met, Burgess and Fleming coincidentally shared an agent – Peter Janson-Smith and in 1985 chose Goldfinger as one his “99 Novels: The best in English Since 1939” 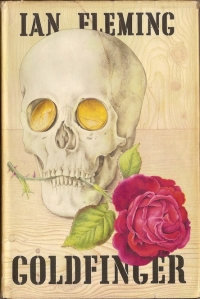 Guardians of the good name of the novel (some of them, anyway) may be shocked at this inclusion. But Fleming raised the standard of the popular story of espionage through good writing—a heightened journalistic style—and the creation of a government agent—James Bond, 007—who is sufficiently complicated to compel our interest over a whole series of adventures. A patriotic lecher with a tinge of Scottish puritanism in him, a gourmand and amateur of vodka martinis, a smoker of strong tobacco who does not lose his wind, he is pitted against impossible villains, enemies of democracy, megalomaniacs.

Auric Goldfinger is the most extravagant of these. He plans to rob Fort Knox of its fifteen billion dollars worth of gold, modestly calling the enterprise Operation Grand Slam, proposing to poison the Fort Knox water supply with “the most powerful of the Trilone group of nerve poisons”, then—with the aid of the six main American criminal groups (one of which is lesbian and headed by Pussy Galore)—to smash the vault doors with a stolen Corporal tactical nuclear missile, load the gold on to a Russian cruiser waiting off the coast of Virginia, and, presumably, concoct further villainies in opulent seclusion.

Meanwhile the American forces of law and order are supposed to let all this happen. James Bond foils Goldfinger, delesbianizes Pussy Galore, and regards his impossible success as a mere job of work to be laconically approved, with reservations, by M, the head of his department. All this is, in some measure, a great joke, but Fleming’s passion for plausibility, his own naval intelligence background, and a kind of sincere Manicheism, allied to journalistic efficiency in the management of his récit, make his work rather impressive.

The James Bond films, after From Russia With Love, stress the fantastic and are inferior entertainment to the books. It is unwise to disparage the well-made popular. There was a time when Conan Doyle was ignored by the literary annalists, even though Sherlock Holmes was evidently one of the great characters of fiction. We must beware of snobbishness.

His appreciation for Fleming’s writing and the Bond canon was refreshing to hear from such an esteemed writer at a time when perhaps the Bond novels were still considered adolescent pulp by the literati.

Buy 99 Novels: The best in English Since 1939 by Anthony Burgess