Written by James Bond Memes blog author Edward Biddulph, this cookbook is full of exciting recipes inspired by the food that Bond eats in the novels and short stories of Ian Fleming. The recipes, devised by the author, are modern, but have a period twist.

This book is very well written with attention to detail and a dose of wit. Edward knows food and literary James Bond in equal measure, weaving the origin of the dishes from the novels into his introductions with the style and sophistication of 007 himself. The source material used is something that real Fleming enthusiasts will wholeheartedly appreciate.

Some of the recipes include: Guavas and Coconut Sorbet; Bouillabaisse; Poached Turbot and Tournedos with Sauce Bearnaise. And that’s just by lunchtime! 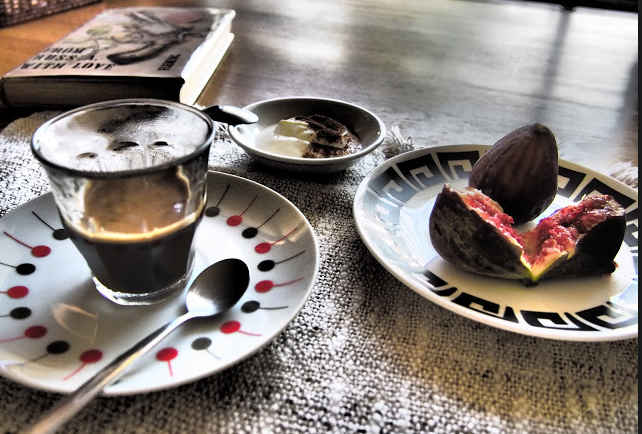 ‘If you’re preparing a romantic meal for two or planning a Bond-themed party, or if you’re simply curious about the sorts of food Bond eats, this cookbook is for you. Eat like Bond throughout the day, breakfast, lunch and dinner.’

The photography by Clare McIntyre is gorgeous and the recipes hold up well – clearly well tested, a difficult task with only the books to work from but Edward also revisits recipes from the same period to augment missing details from Fleming’s novels and also uses good substitutions with a twist on out-dated ingredients.

The cover is an homage to Richard Chopping’s ‘A Spy Who Loved Me’ dust jacket.

We had been struggling to come up with a cover image for the book and it was one of the last pictures we shot. With the cover we had to find a balance between James Bond imagery and also the food.  The cover needed to set the tone and describe what the book contained. We had been considering using a picture of one of the dishes, but that didn’t say ‘Bond’ enough.  Then we were thinking about some of the imagery associated with the films, but thought it could look cliched.  We also didn’t want to do anything that could be considered a copyright issue or litigious.

The Richard Chopping covers were really distinctive and contained regular motifs, such as the wood grain, the font and the flies… Clearly on a food based book we wanted to avoid showing insect activity,  but the other features and composition worked well. 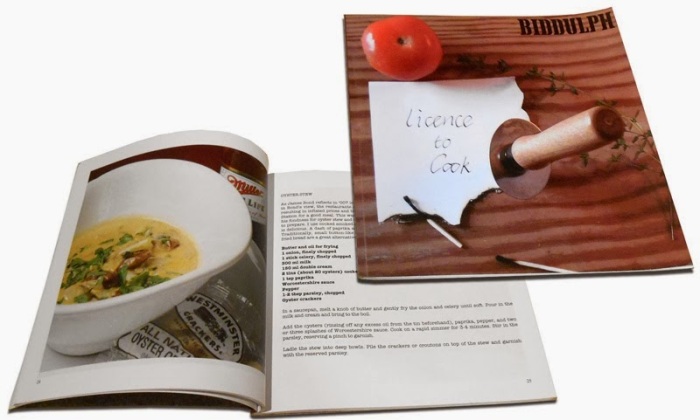 We had a look at the the different covers to see which we could adapt using food related items, and settled on The Spy Who Loved Me. A wooden table provided the background grain pattern, a tomato and a sprig of thyme represented the carnation and an Oyster knife took the place of the dagger.  We tried out a few different layouts of the items and finally I hammered the Oyster knife into the table to get a suitable angle and perspective for the picture.

Edward’s enthusiasm for Bond and his understanding of the period and the context in which Flemming was working, was really interesting.  Plus he’s a great cook,  so we enjoyed trying the different dishes before putting them under the lights. He also whipped up an excellent Vesper Martini to celebrate the end of the shoot.

No Bond fan or gourmand should be without it and while you’re at it, why not make yourself a Fleming 89 Martini to wash it all down! 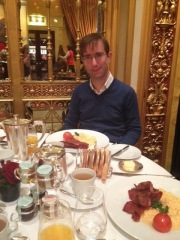 Edward Biddulph is the author of ‘James Bond memes’, a blog which examines Fleming’s writing, the Bond films and the Bond phenomenon.  Edward is an archaeologist based in Oxford, UK, and has several academic papers and monographs to his name.

Clare McIntyre is a freelance artist, photographer and workshop facilitator based in Scotland.

Try this recipe from the book out:

The trend for after-dinner savouries apart from the cheese board has declined in recent times, but in selecting cheese soufflé for dessert during dinner at Goldfinger’s place, Bond reminds us that such dishes were in the past a normal part of the meal. Soufflés strike fear into the heart of many an inexperienced cook, but in reality are very simple; the hard work is whisking the egg whites into stiff peaks.

15 g butter, plus a little more for greasing

Grease two ramekins with butter and heat the oven to 200°C. Separate the eggs and beat the yolks. Melt the butter in a saucepan and combine with the flour to create a smooth paste. Pour in the milk and stir until the sauce thickens. Remove from the heat and leave to cool.

Whisk the egg whites until the whites are stiff. Stir the egg yolks, cheese and salt into the sauce, then gently fold in the egg whites. Pour the mixture into the ramekins and place in the oven for 25 minutes. Remove the soufflés from the oven and serve immediately.

2 thoughts on “‘License to Cook’ by Edward Biddulph”