This week’s castaway is Julian Parrott, who is no stranger to the Caribbean, so he might even feel at home stranded!

The first novel and therefore holds a special place in the Bond pantheon. Although, for me, it’s not the best Fleming novel, but there is something engaging about the tired and vulnerable Bond. He’s more real, more self-aware, and more relatable. His physical, mental and emotional exhaustion by the novel’s end forces him to question his job and himself. He’s not only lost Vesper, but he’s also lost some of his humanity and it takes Mathis’ to reframe Bond’s commitment to his duty.

The Bond we view in the subsequent novels has been forged by the heartbreak of Casino Royale. He’s now more driven, more focused on completing every mission, and more committed to defeating every villain from an almost maniacal sense of personal vendetta.

Cocktails, Casino and Canard: Ian Fleming and the Birth of Bond

002. From Russia With Love, Ian Fleming.

To me, the finest of the Fleming novels. It’s so consistently strong from the opening scene on the Crimean coast to the final scene in a Paris hotel. Superbly plotted with a slightly different feel than most of the other Fleming novels as it is a more realistic (for Bond), gritty, and classic-feeling spy thriller. The plot is timeless. Fleming takes almost half the book to develop the villains, Klebb and Grant, so they’re fully formed characters and commensurately more enjoyable.

The final scene is unexpected and heightens the feeling that perhaps Fleming was trying to send Bond off with a novel that more than hinted at the author’s literary abilities and post-Bond ambitions.

From Russia With Love Dust Jacket

Hang on a mo, I’d love to take Goldfinger but won’t because it’s so spotty. The first two-thirds of Goldfinger are superb and Fleming’s literary abilities are in fine fettle especially across the golf battle chapters and even more so in the chapters that highlight Bond’s drive across France (which are beautifully written.) But the novel is let down by its final third which feels rushed and is significantly less satisfying.

OHMSS is more consistent and better plotted. The second Blofeld novel presents the villain as a fully formed character but, more importantly, the plot reveals a bit more insight into Bond’s character. Again, like the best Bond novels, we see a more emotional and vulnerable Bond, a Bond, poor chap, who once again loves and loses.

004. A Spy Among Friends, Ben MacIntyre.

Macintyre, a Fleming aficionado, has reinvigorated the non-fiction war and espionage genres with his books Agent Zigzag, Operation Mincemeat and Double Cross. He produces exquisitely researched true-life stories that inform but entertain like fiction thrillers. The same can be said of A Spy Among Friends. It is a robust examination of Kim Philby and his betrayal as a KGB double agent at the heart of MI6 and the British Establishment.

Not only does Fleming pop up in the book with an interesting cameo (was Fleming still spying for British Intelligence as late as 1960?) you also get a sense of how the exposing of the earlier “Cambridge Spies”, Burgess and Maclean, directly influenced the evolution of the Bond character. A big book, written with aplomb.

The definitive biography (currently). Meticulously researched and engagingly written offering a deep insight into Fleming’s complicated life and personality. A must, therefore, for any Bond fan but a fan who’s aware that Bond is a minor character in this extensive work. Lycett provides a “warts an’ all” portrait of Fleming in stark contrast to Pearson’s earlier over-friendly biography. Most Lycett readers will take away a version of a Fleming who is a study in contrasts; the indolent workaholic, the puritan louche, the success who felt like a failure and you can’t complete the book and not feel a bit sorry for Fleming.

Any sense of pity, however, may be fleeting for Lycett’s Fleming is a bit of a distant and disagreeable chap. Lycett’s work is at times dense and very detailed, and not a fast weekend kind of read, but is an ideal companion for a long island sojourn.

006. The Man with the Golden Typewriter, Ed. Fergus Fleming.

Perhaps a bit of an antidote to the aftertaste of Lycett’s image of Fleming. The Man with the Golden Typewriter is an insightful and surprisingly entertaining collection of Fleming’s correspondence curated by his nephew. Ian Fleming’s letters to family, friends, colleagues, and general public present a more likeable portrait of the author. Here we see an unguarded Fleming in a more natural environment displaying humility, humour, and warmth alongside his traditional acerbic and often clever prickliness. We see Fleming’s generosity of spirit but the letters also illustrate a less confident and more vulnerable man than the front he usually presented through his public persona.

Nephew Fergus curates the letters with a light touch, organizing the letters in relation to the Bond novels, and adds his own comments only to enlighten or clarify. As the book was approved by the Fleming estate, still engaged in ‘brand’ control, one can only wonder at the richness of the letters that were not included in this collection.

The Man with the Golden Typewriter: Exclusive Interview with Fergus Fleming

007. License to Thrill: A Cultural History of the James Bond Films, James Chapman.

An accessible academic examination of the Bond movies and their reflection of cultural and political trends. Chapman brings an incisive and insightful eye to the evolution of the Bond films from the perspective of a social critic but also from the position of a Bond fan too. Chapman knits together the history of the Bond franchise from the Fleming genesis while exploring the (generally British) cultural trends that lie behind each individual movie.

Chapman’s analysis is comprehensive and it, for the most part, tied to the text rather to an ideological construct. Make sure to grab the second edition with additional material on the Craig era.

Being Welsh I have to go with a compatriot and there are a few to choose from! But Bassey’s rendition of Diamonds Are Forever is a superb addition to the architecture of the Bond franchise. It’s the best thing attached to a rather odd and disappointing Bond film.  It’s great to have a John Barry composition while Don Black’s lyrics are subtly meaningful; playful, sexy, and disturbing. It’s not the bombastic, epic Bassey from Goldfinger but is no less enjoyable for it’s a more mature, nuanced, and plaintive performance. It’s more personal.

One Drink – The Vesper

It should be the original recipe so the Lillet would still have the Kina attached and the quinine that went with it. We all know from the Dr. No movie that Bond is plagued by mosquitoes as he, Honey, and Quarrel navigate through Crab Key’s swamps.

And although quinine’s effect as a mosquito repellent maybe folklore its utility as a treatment for malaria is well proven.

Bond’s gold Dunhill lighter from Tomorrow Never Dies’ pre-title sequence. A basic survival tool: easily and quickly creates fire for warmth, cooking, light, and security. It’s gold and could be potentially be battered for rescue from disreputable characters if required.

Julian grew up in North Wales, a long way from Crab Key. His first Bond experience was going to the cinema with his parents to watch Diamonds are Forever.  He’s been a fan ever since. A US college administrator, Julian occasionally gets to teach a class on Bond and Social Change. His Bond and Fleming interests are broad and diverse. He also makes a mean Vesper. 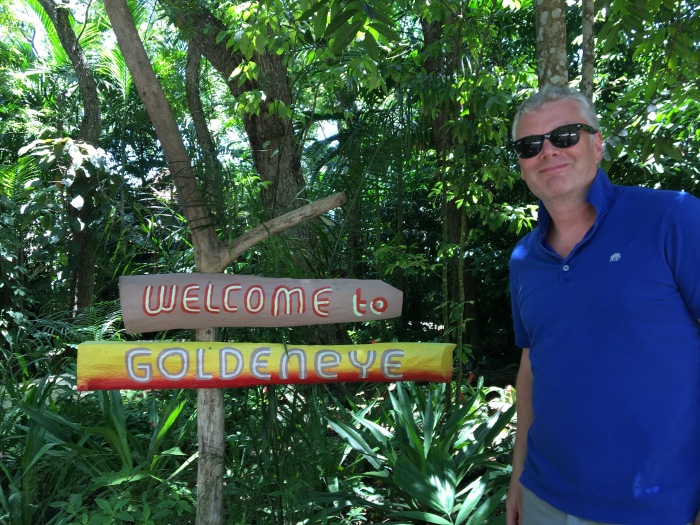