There isn’t much of Ian Fleming’s Jamaica left these days. Perhaps there never really was. Fleming’s Jamaica was only a momentary period in his own nostalgic yearnings for an ideal of the British Empire. Jamaica was an idyll where he could ignore the Empire’s inexorable death throes and home-nation decline. As Fleming enjoyed the lifestyle of the white colonial planter class the move towards Jamaican independence was gaining traction. Fleming’s quiet Jamaica of grand houses and vacation villas, populated exclusively by wealthy white Brits and Americans who still dressed for dinner, was also changing in other ways. As Fleming settled in to his winters at Goldeneye, the hotel and resort boom was beginning to accelerate all across the island’s north coast from Montego Bay to Ochoa Rios.

Today, Jamaica is no longer the exclusive resort island of the rich, famous, or the mad, bad, and dangerous to know. Its sunshine, palm tree fringed beaches, and its reputation for laidback lifestyles brings diverse tourists aplenty.  While fifty plus years of Jamaican independence have further diluted many of the Fleming-familiar elements of the British influence, a few remain. Jamaicans continue to drive on the left, there is the occasional British turn of phrase and British spellings are fighting a battle with American versions, and an occasional British vehicle of 1970s or 1980s vintage provides a break in the dominant procession of Japanese vehicles. British soccer team jerseys, however, are much in evidence but travelers can now find such shirts in abundance across most global cities. 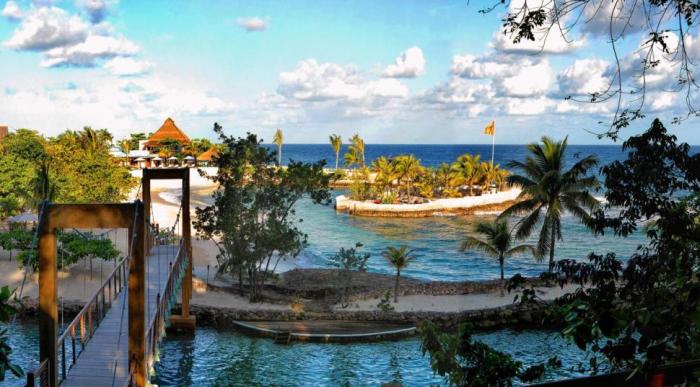 Yet the physical aspects of what Fleming loved about Jamaica are still apparent and familiar to readers of the Bond novels and short stories. The island’s beauty is stunning: aquamarine ocean lapping white-golden beaches that break into palm tree groves that, in turn, run into dense, lush mountains or “the soft green flanks” as Fleming noted. The breezes, that Fleming referred to as the “Doctor’s wind” and “Undertaker’s wind”, still provide their fresh and cooling influences, birds are aplenty, and the crickets, cicadas, and tree frogs continue to provide their “zing and tinkle”  musical accompaniment to any evening outdoor activities. Reefs can still be found a few yards off of the north coast beaches and sheltered bays. The mixture of coral, vegetation, and sea life from fish to rays are best witnessed while snorkeling or scuba diving. Even for a first time visitor, it is easy to see why Fleming loved the Jamaican north shore, why he built Goldeneye on an old donkey racecourse on the eastern outskirts of the small town of Oracabessa, and how Jamaica inspired and influenced a number of Bond novels and short stories. 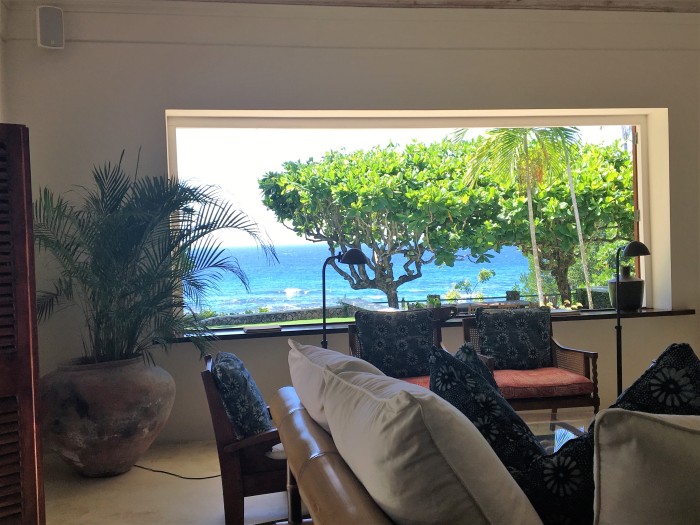 Fleming had an eye for a view and the views from Goldeneye are spectacular and remain unspoiled.  Goldeneye itself is a low-slung, stone bungalow with plenty of vista rewarding broad and open windows. The villa opens out on to a small lawn and sunken garden and then to a spectacular panorama of ocean and sky. It’s set back from a rocky cliff that overlooks a small private beach nestled into its own cove. Fleming swam, snorkeled, and spear-fished here on a daily basis. Dense palm groves (much matured since Fleming’s days) close in from the other three sides. The villa, oft referred to as ugly, certainly appears utilitarian hence Fleming’s Jamaican neighbor Noël Coward’s quip that it resembled a small medical clinic, but is carries both an aesthetic appeal and a quiet charm. It also now possesses a few more creature comforts than Fleming’s early Spartan existence to now meet the demands of the paying guests. Goldeneye is now the center piece of a beautiful boutique resort owned by Chris Blackwell. 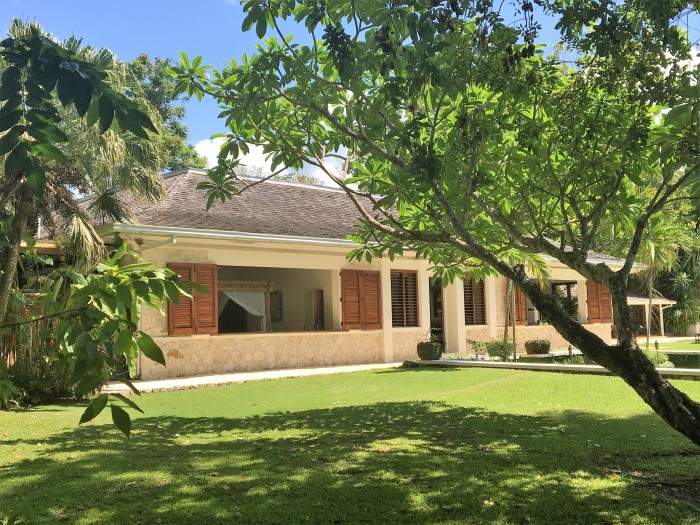 Blackwell, who found renown as the founder of Island Records, the record label that introduced acts as diverse as Bob Marley and U2 to a global audience, is very much part of Fleming and Bond lore. He is not only the current owner of Goldeneye but grew up as a sometime Jamaican neighbor of Fleming’s, was a location scout and fixer for the filming of Dr No, even appearing as an extra, and his mother, the late Blanche Blackwell, had a long running affair with Fleming. So deep and close was their relationship that Fleming’s real wife, Ann, referred to Blanche as Ian’s Jamaican wife.

Blackwell bought Goldeneye and the surrounding 20 acres or so in 1976 from Bob Marley. Blackwell began adding additional villas to the estate in the late ‘70s ostensibly for family and friends to stop by, stay a while, and enjoy. Never one to miss an entrepreneurial opportunity, Blackwell added further villas and amenities and opened the Goldeneye resort in the 1990s. He has more than doubled the original acreage, some of it on reclaimed land, and has built additional villas and cabanas each with their own access to beach or lagoon.  Along with Fleming’s villa with its two adjacent villas and the converted garage which all combined can now sleep 10,  the resort comprises 8 one and two bedroom ocean front beach villas, 3 lagoon villas,  8 one bedroom lagoon cottages and a lagoon hut,  3 one and three bedroom ocean front villas, and  26 beach huts. The resort can accommodate about 200 guests at its maximum capacity. 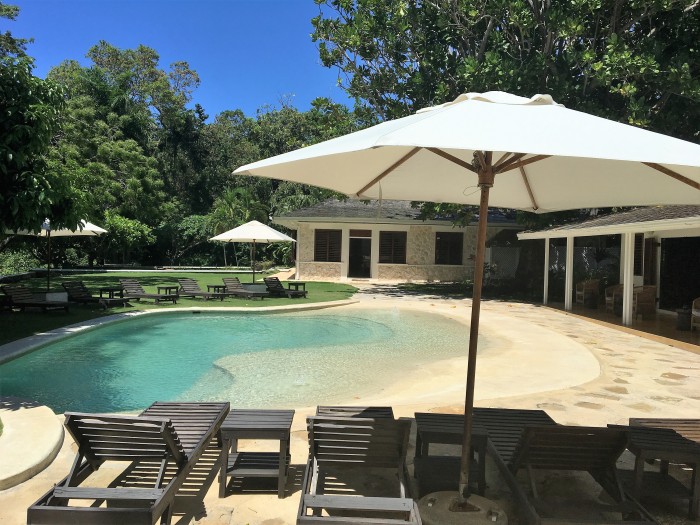 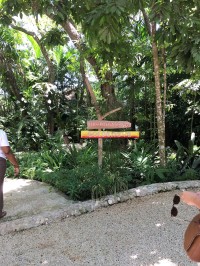 The resort is private, no signage alerts guests or passersby to what lies behind the stone walls and locked black iron-gate set back off of the main road. The first sign is only encountered at the end of a short drive into the property. Fleming’s villa stands off and away and above the resort’s other villas, cabanas, and huts. Separated by a bamboo fence and hidden deep in lush groves, the Goldeneye villa would still be entirely recognizable to Fleming.

A 2007 renovation replaced its tired and worn roof and ceiling. The window openings remain unglazed giving the living spaces an obvious connection to the outdoors. Each of its three bedrooms actually open out on to private yet fully outdoor bathrooms: claw-footed bath tubs, toilets, sinks and vanities. However, the bedrooms also connect to indoor facilities for the slightly less adventurous.  These bathrooms and their plentiful supply of hot water, inside and out, would be one of the clear upgrades from Fleming’s time at Goldeneye. 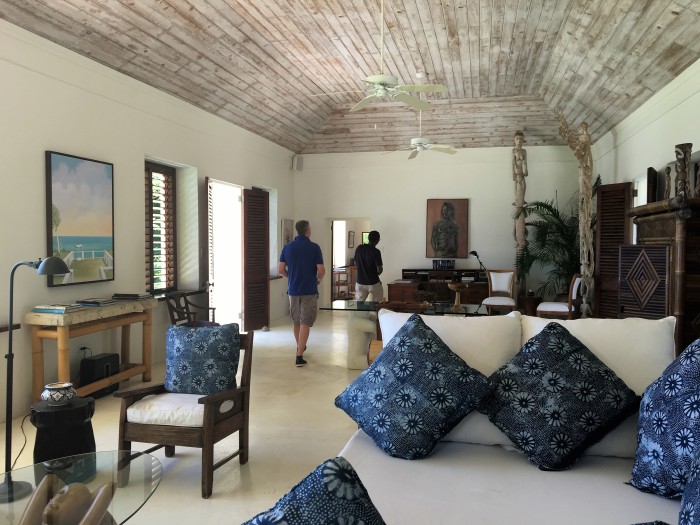 There is more than a Fleming spirit at Goldeneye for a little Fleming memorabilia can be seen around the villa. There are some period photos on the wall and even a display of Fleming’s swimming trunks. Much of the original furniture is still there including the desk where Fleming wrote the Bond novels and short stories. There is also an incredibly well stocked drinks trolley something, undoubtedly, Fleming would have approved of. The staff still refer to Fleming either as “Mr. Fleming” or, occasionally, “the Commander.” 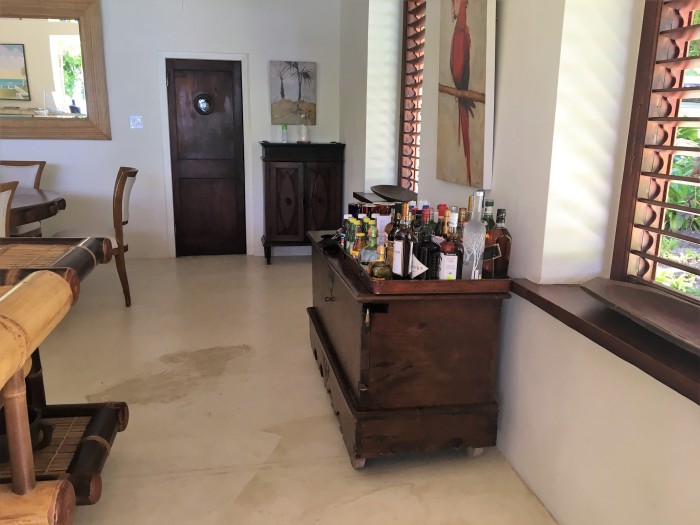 Fleming’s sunken garden is now mature and is often used for outside dining and even weddings. On opposite sides of the lawn there are paths leading down the cliff to the private beach. Guests are encouraged to tackle the more adventurous path only when sober while the other path is considered safer to navigate for those guest who have taken a drink or two. There is also a pool if guests prefer a dip closer to the house. The resort can provide chefs to staff the outdoor dining area if required. And always, the lush grounds provide a sense of privacy. The tranquility that Fleming sought at Goldeneye is palpable. 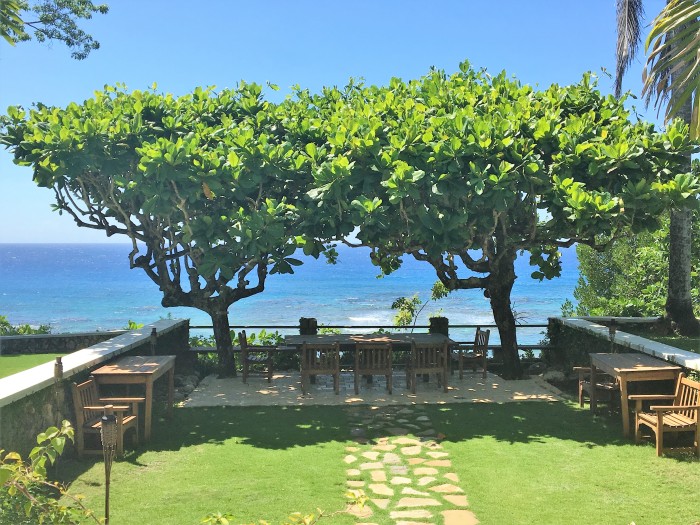 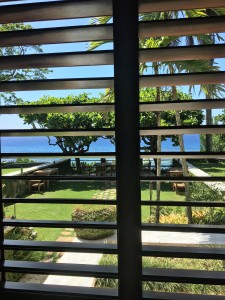 The resort’s other villas, cabins, and huts are set off further down the coastline at beach or lagoon level. The property’s dense, lush, and natural feeling landscaping adds to the aura of tranquil privacy. Each cabin, hut, or villa feels simple, laid-back, and secluded. It’s not your usual resort and it is pricey. It’s perhaps a throwback to the exclusivity of the immediate postwar years when such private estates, Goldeneye included, and boutique resorts hosted royalty, the rich, and the Anglo-American glitterati. A time, when away from the prying eyes of the public, it was a comfortable space in which to drink to excess, smoke a joint, sunbathe naked, and swap a spouse or two.

Today, it is not uncommon to find a celebrity or even Blackwell himself at the Goldeneye resort or taking a dip in the impossibly blue ocean of the Oracabessa Bay. Across the Bay is another Blackwell property, James Bond Beach, the beach at “Crab Key” where Bond welcomed the bikini clad Honey Rider to the shore.

To a Fleming and Bond fan, Goldeneye and Jamaica are tangible connections to Bond’s creator and to Bond’s development. Fleming wrote with the keen eye of the journalist and he didn’t have to look too far from Goldeneye for inspiration and source material. His thick description of Jamaica and the Caribbean  can be found in the novels Live and Let Die, Dr No, Thunderball, The Man With the Golden Gun, and the short stories  For Your Eyes Only, Octopussy (perhaps based on Goldeneye itself), and Quantum of Solace. Furthermore, Fleming’s literate descriptive passages can still serve almost as travelogues for visitors to the islands. More importantly though, the same inspiration that Fleming took from his Jamaican surroundings is still palpable today and well worth a visit. 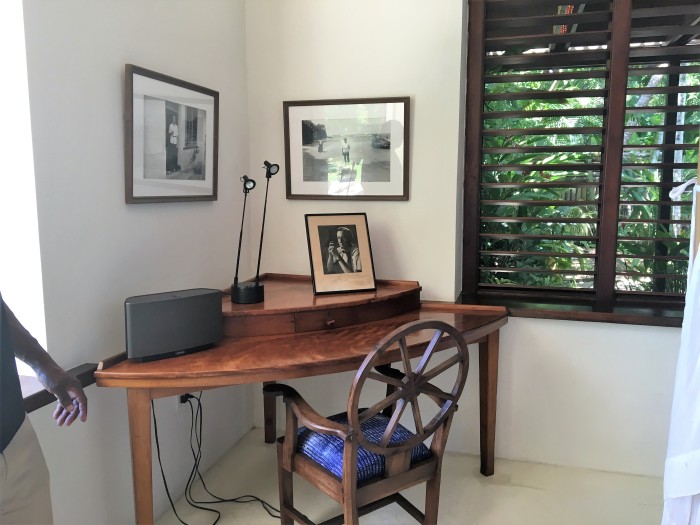 A Day In The Life Of Ian Fleming At Goldeneye

Book a stay at Goldeneye here

One thought on “Literary 007 Tourism: Inside Ian Fleming’s Goldeneye” 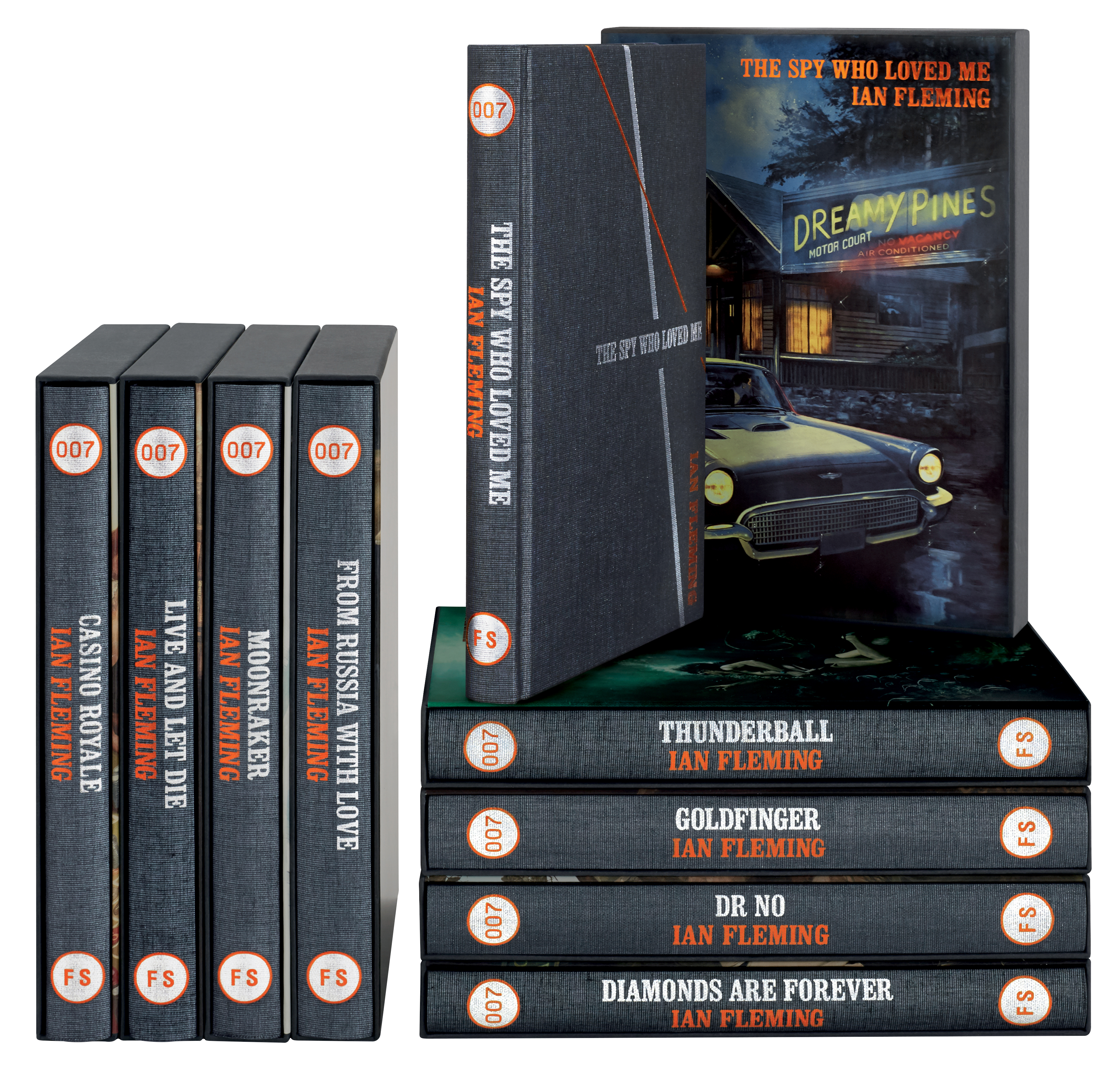