This week we head Stateside to talk to Frieda Toth, to discuss Ian Fleming’s visits to New England and his inspirations for novels such as The Spy Who Loved Me and For Your Eyes Only.

001: What began your interest in Fleming and Bond?

My High School boyfriend–whom I eventually married!– loved James Bond movies and we used to watch them together, both on TV and in theaters. For Your Eyes Only, Sheena Easton, yeah! I started reading the books and was amazed by how much better they were than the movies.

The efficiency, the cleanliness of the writing astounded me and continues to do so. I have only golfed once but my heart races when reading a Fleming golf scene. That’s great writing.

002: How have the books and Fleming, influenced your life?

Well, when I first started reading Bond books, my family was poor. I am not the first or last person to escape the realities of daily poverty through books, of course, but what books! Through Fleming/Bond, I was swimming in the smooth blue waters of Jamaica, playing Blackjack in a smoky casino, dining on the most delicious meals. And Bond was so erudite. I am American but can muddle through French and German and I’m sure that’s because I thought that is what educated people DO, thanks to Fleming.  My love of travel got its beginning from Bond books.

I like that in the beginning of so many stories Bond is doing homework. Before he goes to play cards, he has to learn how. Before he goes on his next assignment, he has to do his target shooting. I think this affected my work ethic.

003: How well do you think Fleming captured the New England settings in his novels such as FYEO, DAF and TSWLM?

Sorry, but I have to correct you: The Adirondacks are not New England. But Fleming knew that! He described the Adirondacks as “ . . . that vast expanse of mountains, lakes and pine forests which forms most of the northern territory of New York State.” Vermont is considered a New England State, New York State is called Middle Atlantic–but the Adirondacks are our own cultural niche. So when Fleming was crossing the border from Vermont to NYS he was crossing a cultural border, too.

Anyway, he was an accurate observer, much better at describing my own hometown than I was in the diaries I kept. I read TSWLM twenty years after it was written and physically the Lake George area was much as he described it. His description of pine trees, which he hated, is still good, “They are very dark and stand very still and you can’t shelter under them or climb them . . .” 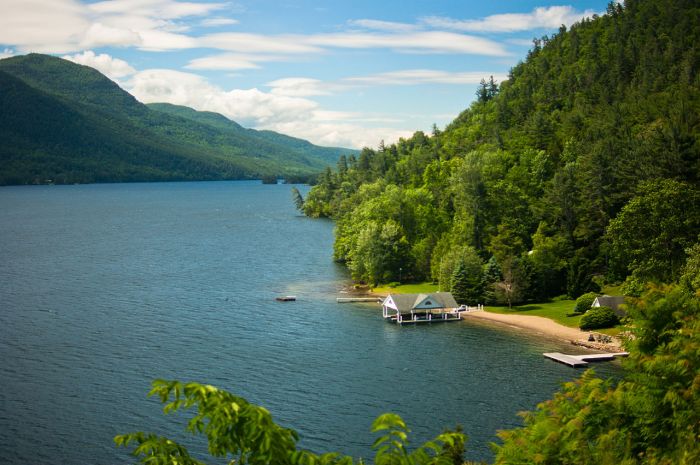 004: Have you ever retraced Fleming’s/Bond’s steps in this part of the world?

As much as I can! I can ride my bike along most of the action in TSWLM, and often do. I visit the baths in Saratoga once in a while, but I avoid the racetrack in August. Most locals do; I imagine that Wiltshire natives avoid Stonehenge on the Solstice and let the tourists take over. That’s what it’s like in Saratoga for those of us that don’t bet the horses.

In the 1980s a friend and I went to the baths, then in sorry state (they have been renovated) and got an attendant straight from a Bond book. She was a sturdily built German woman who said, “Take uff your cloze. You vill not be embarrassed. I heff seen vurse.” I loved that!

I am l looking forward to visiting Fleming’s haunts in Vermont.

005: One of the highlights in DAF is the Saratoga mud bath scene. Do these still exist?

Waah, no! But you can still get a mineral bath. They smell terrible but feel great.  The waters are supposed to have healing qualities and bubble up, naturally carbonated and filled with minerals. The water isn’t just at the bath house; all around Saratoga Springs (the full name of the city) are free water fountains of the foul mineral water. But there’s one labeled “just water” where it springs up fresh and sweet. You can still get a mud “wrap” but it is deceptive; the mud is brought in from somewhere else.  The mud bathhouses burned in 1958.

006: Critics of Fleming often point to casual sexism and racism in his novels. How do you feel about this?

I feel that isn’t enough. If you are going to examine Fleming critically you need to look at a tetralogy: Sexism, racism, homophobia, and addiction.

It’s important to remember that Fleming was writing thrillers, by intent, with one eye on the bank account. Writers in it for the money often write what they believe will sell–I myself have written for The National Enquirer when the $100 question looked like fun.  If we look at objectifying women as a commercial strategy we have to admit it worked; his books were highly profitable. But even if we dismiss his objectification as mere marketing, we have to wonder what it says about our society that it is so profitable, and how he knew it would be.

We can view Bond as an absurd tool of escape if we wish too, much like the character Bulldog on the television show Frasier or Steve Dallas in the old cartoon Bloom County. Fleming himself chose a wife who was mature, who had already been married with children, and who turned up her nose at his writing– far from the nubile subservient Bond girl we generally imagine.

Fleming’s writing is complicated and often contradictory and I don’t think it is too much of a stretch to say he is like Dorothy Parker or Dickens or Shakespeare in that there’s an awful lot of subjective good and subjective bad and what you get out of it depends greatly on what you want to hold on to.

Fleming himself seemed upset that Bond was being viewed as a hero instead of an anti hero and this is part of the reason he wrote TSWLM. But people WANT their escapism. I often identified with Bond rather than the Bond “girl” because who wouldn’t enjoy casual, risk- free sex?

On the other hand, Fleming showed remarkable awareness of the modern concept of consent. The scene in Live and Let Die where G G Sumatra dances (ahem!) happens only after the bandleader asks her permission and he crows about her consent by saying, “GG agrees!” When a Bond girl feels the need to correct his plan, as Domino does in Thunderball, Bond treats her idea seriously. And Fleming made sure we saw Bond knew when Bond was being an ass. When Loelia Posonby rejects Bond and his cronies in Moonraker, Bond says that to save their own egos the men made the excuse that she was frigid. That is a very self-aware statement, and far from sexist.

Fleming himself couldn’t sustain the marketable fantasy that women were lesser; in the short story “Quantum of Solace” Bond is irritated with himself when he hears himself talking disparagingly of an “air hostess” and gripes that he could never marry “an insipid slave.”

Fleming’s attitudes toward women as drivers and as people who talk too much are irritatingly common for the time; I can’t hold him responsible.

As far as the racism, I have difficulty addressing it as I am not a person of color. I will say that the terms Fleming used, such as “chigro” “nigga”, as well as the dialects, make me cringe. As horrible as his attitudes were toward people of color, the fact is that the other thrillers I discovered at the time were horribly white. There were characters of color in Bond books who were fully formed personalities.  Not good enough, by a long shot, but some characters of color are better than no characters of color. I hope.

Fleming’s attitudes toward LGBT can be similarly problematic. I am a cishet person who views herself as an ally. Wint and Kidd (DAF) are famous as people Fleming made fun of, although they were more nuanced in the books than in the movies. Fleming went out of his way to portray being gay as something bad, and even has M give himself a test to see if he has homosexual tendencies. (M fails, which at the time is meant to indicate the test is bad but to the modern reader reads as M is gay, which I think is great.)

But also Fleming’s were the only thrillers I discovered at that time which admitted lesbians existed and gave them agency. While Pussy Galore was the tired old cliché of a woman who liked women because she had not found a real man, Tilly Masterson is treated with respect in her sexual interests, and when Bond is puzzled that Pussy seems interested in him, he says only, “I thought you liked girls,” with no judgment.  I am sure this helped me become an ally.

It’s important also to discuss Fleming’s/Bond’s addictions.  I’ve lost count of the number of biographies, lesser and greater, where the author says Fleming “ignored” his doctors’ advice to cut out the smoking and drinking. He ignored nothing. He was an addict. It killed him. He ended his life as a pitiable creature and it is hypocrisy of the most annoying sort that people who should know better continue to romanticize his addictions.  That the same authors who pretend to be insightful and click their tongues at Fleming’s sexism ignore his addictions says more about them than Fleming.

Fleming was an addict but he was aware, and although he never beat his addictions he showed more than common awareness, as when he sent Bond to a spa and detailed the health problems that necessitated the spa stay.

007: What is your favourite Bond novel or short story?

No question, “Quantum of Solace.” As Fleming writes the downward spiral of the doomed couple, you can feel the pain, but he magically gives us a wisp of a happy ending for the person he painted as the antagonist.  I feel strongly that Fleming was a genius as a short story writer, and that Bond was a great way to pay the bills, but he put his heart into his stories. 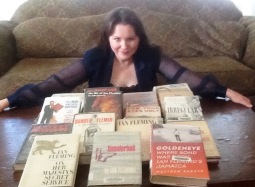 Frieda Toth is an American librarian and writer who, apart from her exchange student days in Liverpool, spent most of her life where Ian Fleming set The Spy Who Loved Me, Northern New York State. She is the co-author of Warren County: Its People and Their History Over Time, and, like Ian Fleming, a certified scuba diver.

The Spy Who Snubbed Me (Journal of  New York Folklore)

‘From Vermont with Love’ – Ian Fleming’s Love Affair with Vermont

2 thoughts on “Interview with Frieda Toth”