James Bond lived in Chelsea, a pleasant and, these days very expensive, area south-west of Central London. Beyond that the information provided by Ian Fleming is pretty blurred. The most detailed source of information on this subject is “Moonraker”, possibly the most personal of the Bond books, taking place, as it does, wholly in England and telling us quite a lot about Bond’s personal and social circumstances.

In “Moonraker” Fleming tells us that Bond’s flat is the ground floor of a Regency house in a small Chelsea Square with Plane trees. Elsewhere he develops this by telling us that it also includes the basement, where Bond’s Scottish ‘treasure’ May has her quarters, that the sitting room has a bay window overlooking the square and that there are steps running up to the front door.

At a rough count there are seven squares in Chelsea. Running from east to west along the King’s Road from Sloane Square, they are: Royal Avenue (an enormous open ended wide street with a central pedestrian area), Wellington Square, Markham Square, Chelsea Square, Carlyle Square, Chelsea Park Gardens and Paulton  Square. Royal Avenue can be discounted immediately for the reasons I have given above. It is, though, interesting as the location of the house in Joseph Losey’s important sixties film, “The Servant”, starring Dirk Bogarde and James Fox. I have also rejected Markham Square, Chelsea Square, Chelsea Park Gardens and Paulton Square for these reasons:

So we are left with Wellington Square and Carlyle Square. I am well aware that John Pearson identified Wellington Square as Bond’s address when he wrote the ‘Authorized Biography’ (1973) and chose No. 30, because a friend lived there. There is little to argue with here; I have long accepted this, as Wellington Square fits most of the significant criteria. It is a small square, it has Plane trees, there are steps up to the front doors, the houses could be described as ‘Regency’ and the sitting-room window on the ground floor of No. 30 would overlook the square.

There are steps down to the basement with its own front door for May’s access. The only point on which it fails is that none of the houses in Wellington Square have bay windows. This has been explained elsewhere and somewhat unconvincingly by suggesting that the wall is sufficiently thick for the side cheeks of the window opening to be ‘raked’ so that they appear angled, as a bay window would from inside.

But there is a Dark, and somewhat secret, Horse further down, and on the other side of the King’s Road. Carlyle Square. This is a small square with Plane trees, off the King’s Road. It has been described to me as ‘the prettiest square in London’. It is unknown to many people as access from the King’s Road is by two narrow pedestrian walks and sight of the square itself is sheltered by significant evergreen planting along the main road. 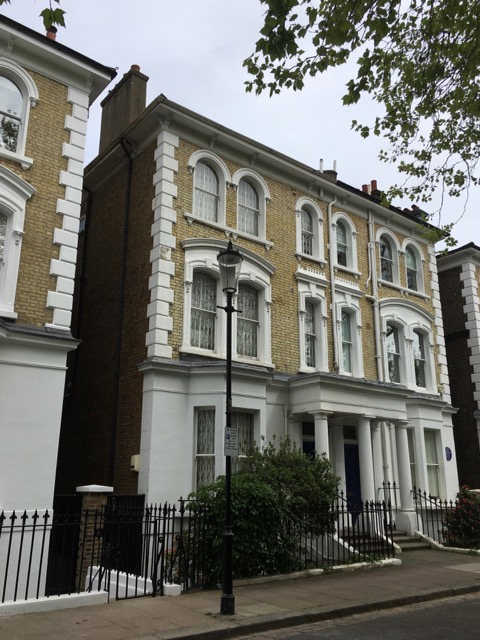 Vehicular access to and from the King’s Road is from the opposite end of the square via Old Church Street – but this is simple and does not conflict with Bond driving out of the square and up the King’s Road towards Sloane Square. The houses, which have externally accessed basements, are similar to those in Wellington Square except that importantly, they have bay windows. I like Carlyle Square. It is attractive, contained and has the privacy that Bond might have appreciated. 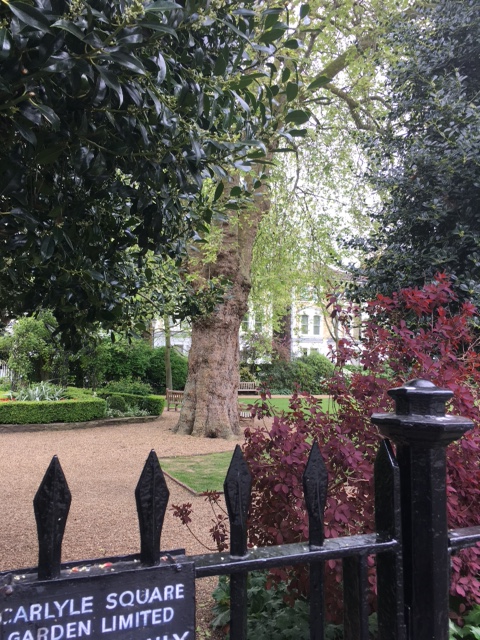 And consider this: in the early ’50s before and after his marriage to Ann Charteris, Ian Fleming lived in a flat in Carlyle Mansions, in Cheyne Walk, down on the embankment, only an energetic stone’s throw from Carlyle Square. He left because Ann didn’t like it there and wanted something grander. They moved to Victoria Square, behind Victoria Station.

I am certainly not trying to dispute John Pearson’s well established identification of Wellington Square as Bond’s address but I would like to promote this attractive alternative for consideration.

18 thoughts on “Made in Chelsea – Where Did Literary James Bond Really Live?”