In the run up to the hotly anticipated biography of Maxwell Knight, we caught up with its author Henry Hemming to discuss this enigmatic spymaster. 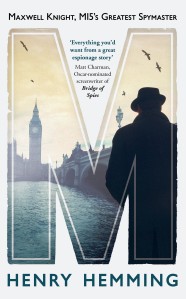 What drew you to write about Maxwell Knight?

Initially I was taken by the story of one of Knight’s agents, Olga Gray, but it was my US editor, Clive Priddle, at Public Affairs, who suggested moving the focus to Olga’s spymaster, Maxwell Knight. He was spot on. Knight has turned out to be a riveting biographical subject: a talented and conflicted man, fundamentally likeable, who found himself during the darkest days of WW2 forced to choose, essentially, between his friends and his country.

As a famed naturalist virtually no one knew of his spymaster past, so how did this remain a secret for so long?

Largely because most people employed by MI5 and MI6 were – and still are – pretty good at keeping secrets. Also because Knight lived in an age before the Internet, when it was that much easier to be in the public eye without having too much known about your past. Yet what I found most amazing about his two careers – as a spymaster and a popular naturalist – was the extent to which they overlapped.

Knight did not retire from the Security Service until 1961, by which time he had appeared in more than 300 radio broadcasts and 40 television programmes and had written over 20 books on the subject of natural history, wildlife and pets. The equivalent today would be finding out that David Attenborough was also, in his spare time, a senior MI5 officer.

There have been many people put forward as Ian Fleming’s ‘inspiration for M’, but what makes Maxwell Knight one of the strongest candidates in your mind?

To my mind Admiral John Godfrey was the main inspiration for the personality of Fleming’s M, yet the name of Fleming’s character can be traced back to Maxwell Knight. From the moment Knight joined MI5 in 1931 through to his retirement in 1961 he was known as ‘M’. His section was referred to as ‘M Section’. His agents were given codenames prefixed by ‘M’ (M/1, M/2, M/A, M/B etc.). Given that he liaised frequently with Special Branch, MI6 and SOE, it’s reasonable to argue that if, during the middle of the 20th century, you had asked someone working for British intelligence about ‘M’ they might have assumed that you were talking about Maxwell Knight.

What were some of Knight’s major achievements for MI5?

Perhaps his greatest achievement in MI5 was to help destroy British Fascism during the Second World War – a feat made more remarkable by his own history inside the movement. He also changed the way female agents were seen within MI5, and he helped to transform the government’s understanding of the British Communist movement. Other highlights include his work on the Woolwich Arsenal Spy Ring, his penetration of the Right Club and the prosecution of Tyler Kent and Anna Wolkoff.

Knight was also one of the first to suspect the traitorous art historian Anthony Blunt of being a spy for the Russians, but his warnings went unheeded. What did Knight have on Blunt at the time?

Nothing concrete, is the short answer – which explains why his warnings largely fell on deaf ears. One of Knight’s great skills was his ability to get a sense of different people in very little time and to work out if they could be trusted. His evidence against Blunt, such as it was, was centred on his instinctive sense that Blunt was hiding something more than his sexuality.

Knight was one of life’s true eccentrics but how do you think a character like that would fit into the modern day MI5, if at all?

He was certainly eccentric when it came to animals, and a colourful character. At the same time he had a good sense of what he could get away with. He was not oblivious to the world around him. Had you transposed him to modern-day MI5 I think he’d work out before long what it was possible to get away with – and then make sure he lived on the edge of that. Knight often enjoyed being the odd man out.

Henry Hemming is the author of five works of non-fiction including In Search of the English Eccentric, Misadventure in the Middle East, shortlisted for the Dolman Travel Book Award, and Churchill’s Iceman, published in the US as The Ingenious Mr Pyke, which became a New York Times bestseller.

He has written for The Sunday Times, Daily Telegraph, Daily Mail, The Times, The Economist,  FT Magazine and The Washington Post and has given interviews on Radio 4’s Today Programme and NBC’s Today Show and spoken at schools, festivals and companies including RDF Media, The RSA, Science Museum, Frontline Club and The School of Life.