By Wesley Britton. Re-published with additional material by Matt Sherman.

It all began with Ian Lancaster Fleming’s richly descriptive James Bond novels. During the 1950s, when the first seven 007 books appeared, Bond was a globetrotting tourist with many travel scenes at a time when thrillers were designed for an international market. Descriptions of gentlemen’s clubs in London, the underwater scenery in reefs near Jamaica, and the habits of Sumo wrestlers appealed to readers themselves traveling after picking up their titles in airports and terminals.

Fleming, who’d penned his own 1963 travelogue of favourite sites, Thrilling Cities, also looked to spy literature for inspiration. For example, he acknowledged fellow novelist Eric Ambler’s contributions to the Istanbul sequences in his 1957 ‘From Russia With Love’ by having Bond reading Ambler’s The Mask of Dimitrios, the 1939 novel Fleming had used as a tour guide during his first trip to the city.

Then, during the 1960s, television and movie scripts used travel to give stories realism and credibility. The production teams behind TV shows like ‘Danger Man’ and ‘I Spy’ tried to give their adventures a visual travel documentary look by filming on location to give us new vistas in which the heroes and heroines operated.

Spy movies too have begun with writers first finding exotic locations before fleshing out characters or stories. One famous example was screenwriter Earnest Lehman researching locales for Alfred Hitchcock’s 1959 ‘North by Northwest’. Hitchcock wanted scenes in a U.N. lounge and atop Mt. Rushmore. Lehman went to the U.N., Grand Central Station, Chicago, South Dakota and ultimately tried to climb Mt. Rushmore himself before scripting the ultimate Hitchcock adventure.

This process continues in nearly every action-adventure film produced with an international flavour in mind. For example, in the DVD commentary for the 1983 Bond film, ‘Octopussy’, producer Michael Wilson admitted the planning began with trips to India to find exotic places 007 hadn’t visited before. Once they’d found interesting visuals, then a script was devised to put the world’s most famous secret agent in these places.

After decades of these adventures, the modern tourist can now go where famous spies have gone before. If you’re planning a trip to Switzerland, you can go high in the Alps to Piz Gloria, a ski lodge named after a setting in Fleming’s ‘On Her Majesty’s Secret Service’ and see where the 1969 movie version was filmed.

Likewise, Phuket, in southern Thailand, promotes boat trips out to see limestone formations seen in 1973’s ‘The Man With The Golden Gun’. Thailand also heavily courts tourists to see “James Bond Island” where Roger Moore and Christopher Lee dueled during the energy crisis. This island has long been a dangerous place to visit due to serious pirate traffic in those waters. Now, that’s getting a taste of the exotic!

On the literary side, Kent, England has developed tourism brochures highlighting their links to Ian Fleming’s Bond novels. You can visit Ian Fleming’s grave in Sevenhampton and two locations for Bond films: the Motorola factory at Groundwell was a double for a high tech oil pumping station in ‘The World Is Not Enough’, and the Renault building was used for filming a series of scenes featuring James Bond (Roger Moore) and Patrick MacNee (Sir Godfrey Tibbett) in ‘A View to a Kill.’ Capitalizing on these attractions, the town hosts occasional Bond events featuring stars from the 007 films, past and present.

But, for spy fans, there’s nothing quite like the conventions that mix tourism, the opportunity to talk with celebrities, and the chance to play games and dress up like James Bond and take a crack at the roulette tables. According to Matt Sherman, who’s been hosting fans and actors, authors and filmmakers at his Bond and spy events since 1998,

“Fans expect a fun and glamorous location when chasing spy trails. I’ve had much pleasure building tours around locations.” These have included Sherman’s events in The Caribbean, Las Vegas, New York, Los Angeles, Miami, Chicago and more. Visitors have the chance to see many Bond novel and film locations and chat with dozens of Bond and spy actors.

Over the years, Sherman says, certain places have proved the most popular for espionage buffs. “Fans adore visiting Largo’s Palmyra home and The One&Only Ocean Club in The Bahamas, so they are a part of each tour I’ve done in The Bahamas,” says Sherman. Surprisingly, he observes, America hasn’t yet fully tapped into its possibilities for secret agent tourism.

“In the United States, only with the advent of spy museums in New York and Washington, D.C. have municipalities actively promoted spy tourism. I’m disappointed because marvellous U.S. locations include hundreds of exteriors and interiors used for the 007 films and novels.” 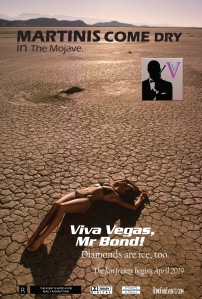 But things are changing. “Cities like New Orleans and Miami have developed a good following for us as people enjoy local color and sightseeing along with 007 history.” And celebrity guests don’t always have to be faces familiar from the screen. Past guests have included authors, location managers, pilots and boat operators. Perhaps the best mix of faces and places took place at the inaugural Spy Fest in Los Angeles. Fans met David Carradine (Kill Bill), Robert Culp (I Spy), ten 007 actors and ten experts connected to Bond film production, along with KGB Major General Oleg Kalugin as headliners who sat with over 80 VIP guests and their excited fans. Spy Fest remains the sole fan event with CIA approval and participation.

For the coming year, Sherman’s events include a group joining Diamonds Are Forever actress Trina Parks at the Dragon*Con Parade, all in Bond costume, as she rides the route in a white Lotus from The Spy Who Loved Me, and an event in Las Vegas.

Sherman said, “Amazing as it sounds with all the changes since filming, I’ll be leading tours to over 40 Diamonds Are Forever film locations in April 2019 in Las Vegas, including many film scenes never visited by groups before then.”

But spy aficionados don’t have to wait for planned weekends to capture some flavour of secret agent work.

While you’re in England, you can also pick up Gary Giblin’s 2001 James Bond’s London: A Reference Guide to the Birthplace of 007 and His Creator and be your own tour guide. Using Giblin’s photos and history of 007, you can find locations used in both the books and films. It includes dozens of London (and Bondian) Landmarks and Institutions, including the Bank of England, the College of Arms, Trafalgar Square, St Paul’s Cathedral, the Houses of Parliament, De Beers, Sotheby’s, Harrods, Lloyd’s, Scotland Yard, Tower Bridge, the Old Bailey, the National Gallery, the British Museum…

You can also visit the Bond in Motion exhibit in Covent Garden. Bond in Motion, in association with EON Productions, has over 100 individual original items on display from the James Bond film series including concept drawings, storyboards, scripts, model miniatures and full-size cars, boats, and motorbikes. Highlights include the Aston Martin DB10 from Spectre, the Aston Martin DB5 from GoldenEye; the ‘Wet Nellie’ Lotus Esprit S1 from The Spy Who Loved Me; the Rolls-Royce Phantom III from Goldfinger; and the ‘Little Nellie’ Wallis WA-116 Agile Autogyro from You Only Live Twice.

Bond in Motion Exhibition in the London Film Museum

Clearly, the main draw for US spy enthusiasts and the general public alike is the International Spy Museum in Washington D.C. Since 2002, this attraction has boasted two floors of exhibits including artifacts from a 1774 letter from George Washington establishing a New York spy network to a KGB lipstick gun to radio transmitters hidden in shoe heels and tree stumps.

“This is the largest number of espionage artifacts on public display anywhere in the world — a truly unique opportunity!” says Museum Executive Director Peter Earnest, a 36-year veteran of CIA’s Clandestine Service.

Here’s the place to learn about all things espionage in an interactive environment. All visitors are invited to choose a “legend,” a false identity to play for the day. Throughout the museum, in between crawling through heating ducts and listening to videos describing various eras in espionage, crowds of young would-be agents hang around interactive devices to learn how well they can play at being their legend.

According to Amanda Ohlke, Manager of Adult Education for the museum,

And check out the museum’s website and you can also catch evenings with lectures by spy authors, screenings of rare films, and memories of actual veterans of spycraft.

But there’s more. The National Cryptologic Museum is the National Security Agency’s principal gateway to the public. Being the first and only public museum in the Intelligence Community, located adjacent to NSA Headquarters, Ft. George G. Meade, Maryland, the Museum collection contains thousands of artifacts about the history of American cryptology, the people who devoted their lives to cryptology and national defense, the machines and devices they developed, the techniques they used, and the places where they worked. the Museum hosts approximately 50,000 visitors annually for the perfect admission price—free!

And, in 2005, the government of Kagawa Prefecture in Japan even established a museum dedicated to Bond novelist Raymond Benson’s 2002 book, ‘The Man With the Red Tattoo’, which was partially set on Naoshima Island in Kagawa Prefecture.

With all this to explore, there’s no reason not to join in the adventure, history, fantasy, and camaraderie of fellow undercover spy tourists. As we learn about other attractions, we’ll add them here. Please send us notes on anything we missed!

Learn more about Matt Sherman’s Bond events here and the 2018/19 calendar of events.

Bonding through Kent and the WhitLit Festival