“For me, this is all the world. There is beauty, there is ugliness, and there is death.” – Stromberg, The Spy Who Loved Me. 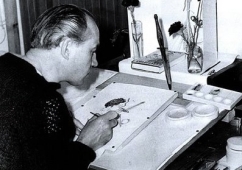 Whilst Stromberg himself was not a Fleming creation, these words sum up the visceral appeal of the dust covers commissioned by him and executed with panache by the illustrator Richard Chopping.

The skull and the rose, the dagger and carnation, the toad and the chrysanthemum, the fly and the conch shell. All these were the subjects of Richard Chopping’s paintings for Ian Fleming’s James Bond novels and they each juxtapose beauty and ugliness, sexuality and repulsion, death and desire.

This use of combining opposing symbols speaks to us about what we can expect between the covers of a James Bond novel even before the book is opened.

So successful is this use of symbolism that it has become a kind of shorthand, a visual language that instantly describes Bond and his world. This symbolism has been appropriated and used across a number of mediums since, to both pay homage Chopping’s work and to suggest a Fleming-esque combination of danger, style, and sexuality.

For instance, the cover of Blur’s 1994’s single “To The End” features a suppressed Walther PPK with a single red rose lain across it. One might argue that this has nothing to do with Chopping or James Bond, as the music video for the song is a pastiche of Alain Resais’s surrealist French New Wave film, “Last Year in Marienbad”.

Another example is the cover art for the last instalment of Mark Gatiss’ Lucifer Box trilogy, “Black Butterfly”. This cover deliberately invokes Chopping’s work and should be viewed more as a pastiche of the artist, and a respectful homage of the Fleming novels, than as an attempt to play on the symbolism of their dust jacket illustrations.

After all, Black Butterfly contains a number of Bond references and Gatiss himself is something of an expert on 007. However, the very fact that this cover manages to invoke the Bond novels goes to show just how enduring Chopping’s work truly is.

Chopping’s art is so intrinsic to the appeal of the Bond novels that not only is his style pastiched for the covers of several of the continuation novels, but also there have been many Chopping inspired covers created by fans for the Fleming novels that he did not illustrate.

For many, it is difficult to see this juxtaposition of beauty and death without being somehow reminded of James Bond and his creator Ian Fleming, which is a testament to the cultural impact and continuing appeal of Richard Chopping’s work.