Ian Fleming found much pleasure in drinking. That much is obvious when encountering the attention paid to the variety of drinks that James Bond orders around the world on assignment. And James Bond, like his creator, finds solace in alcohol. In Thunderball, Bond’s medical report states that he drinks half a liter of spirits daily and has liver damage. Bond’s reply to this?  “It’s just that I’d rather die of drink than of thirst.” To which the authors, noted restauranteurs and mixologists, rightly focus on the bonhomie associated with moderate alcohol consumption and have created a delightful elixir of Bondian cocktails sure to tempt both Bond fans and bar enthusiasts alike.

The 50 drink recipes in this properly-sized, handsomely photographed book include both the ten classic cocktails Bond orders in the novels, and 40 new creations, all named after characters and descriptors found in Fleming’s thrillers. After a hard day at the office, who could refuse a “Smersh”, made with Beluga Noble vodka and black-olive infused Noilly Prat, garnished with lemon peel and a teaspoon of caviar? Or the “Spectre”, an enticing combination of Tanqueray gin, Chartreuse, Absenteroux vermouth, Lillet Blanc, orange bitters and Dr Adam Elmegirab’s Boker’s bitters (two dashes each—not three).

While James Bond’s recipe for the martini is well-known thanks to its’ inclusion in the films “Casino Royale” and “Quantum of Solace”, Fleming found the drink terrible (according to Fergus Fleming, Ian’s nephew, in his witty introduction). The authors remind us that the aperitif Fleming stipulates, Kina Lillet, was discontinued in 1986, and contained quinine.  We also learn that while in Jamaica, Fleming liked to offer his Goldeneye guests a flaming punch, composed of “bottom shelf” rum, sugar, and citrus peel, which he called “Old Man’s Thing”. The cocktails contained in this book, are not unlike Fleming’s villains, both delicious, and devilishly diabolical. Curiously, the first drink Bond orders in 1953’s Casino Royale, an Americano, is not included in the book is but a minor omission.

What sets Shaken apart from other theme-related books is the inclusion of Fleming’s descriptions of alcohol in the Bond stories. “Fleming on gin”, “Fleming on vodka”, etc. While smoking and liquor consumption likely contributed to Fleming’s early death at 56, he was a writer who undoubtedly thought, as Felix Leiter states in Live and Let Die, “It isn’t a bad life when it consists of sitting in a comfortable bar drinking good whisky.”

Jeffrey Susla teaches writing at the University of Hartford. 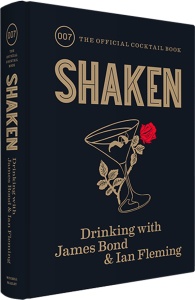 Cocktails are at the glamorous heart of every Bond story. Whether it’s the favoured Martini, which features in almost every book, or a refreshing Negroni or Daiquiri, strong, carefully crafted drinks are a consistent feature of the Bond novels. Recipes are divided into five categories: Straight Up; On The Rocks; Tall; Fizzy; and Exotic. Sip on inventions such as Smersh, Moneypenny, That Old Devil M and Diamonds are Forever, as well as classic Bond cocktails such as the Vesper and, of course, the Dry Martini. Each recipe is accompanied by extracts from Fleming’s writings – be it the passage where the classic drink was featured or a place, character or plot that inspired one of the drinks.

One thought on “SHAKEN: Drinking with James Bond & Ian Fleming”