On 18 March 1959 Fleming had written to Richard Chopping about the cover he had undertaken for Goldfinger, saying that:

“The new jacket is quite as big a success as the first one and I do think [Jonathan] Cape have made a splendid job of it”.

Once again, Chopping was asked to provide the cover art for Fleming’s next book, the collection of short stories For Your Eyes Only. 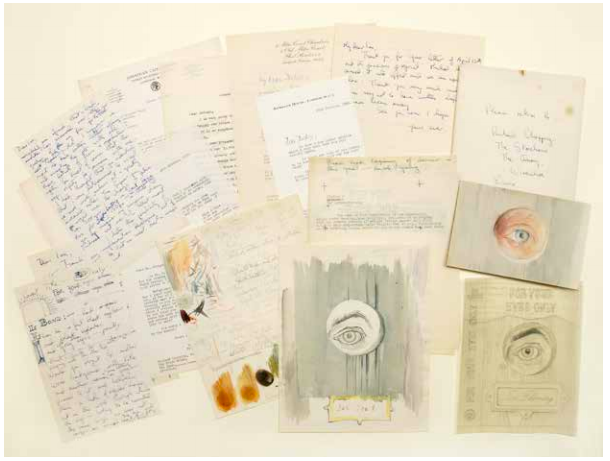 Neither Fleming nor Chopping could come up with a suitable idea. Chopping’s partner Denis Wirth-Miller suggested a hole in a piece of wood with a card underneath reminiscent of a private club.

In 1959, he Fleming wrote a letter to his publisher Michael Howard at Jonathan Cape.

From ‘The Man with the Golden Typewriter: Ian Fleming’s James Bond Letters’ edited by Fergus Fleming

Fleming was very involved in the design

In the end, he was extremely happy, writing to Chopping saying: 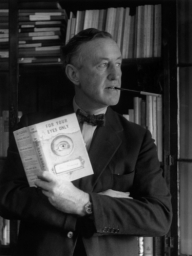 “First of all a thousand congratulations on the new jacket. It is quite in your topmost class and Annie loves it also. You and I are really a wonderful team.

I am busily scratching my head trying to think of a subject for you again. No one in the history of thrillers has had such a totally brilliant artistic collaborator!”

On the right, Ian Fleming proudly standing in his study with a copy of ‘For Your Eyes Only’.

Below, the finished design for the book.

New Solo UK Cover Homage to For Your Eyes Only?

Peter Harrington Fleming Catalogue – Including the archive for the dust jacket of For Your Eyes Only. 14 October 1959–14 April 1960. A series of 22 autograph and typed letters signed between Ian Fleming, Michael Howard, his agent at Jonathan Cape, and Fleming’s dust-jacket artist of choice, Richard Chopping, documenting the conception and creation of Chopping’s jacket design for Fleming’s For Your Eyes Only (1960). The collection contains a number of drafts
and colour palettes for the dust jacket, as well as a final sketch.