001. What drew you to tackle this aspect of Fleming’s career?

For over fifty years I have been interested in Ian Fleming. I think from the time my sister, three years older than me, got me in to see the Film ‘From Russia with Love’ I must have been twelve or thirteen at the time. The real spark for the book came reading Craig Cabell’s book ‘Ian Fleming’s Secret War’ it has a short chapter on Operation Golden Eye in which he expressed the view the subject needed closer examination.

Having an interest in the ‘what-if’s’ of WWII and having already researched Operation Felix, the German plan to capture Gibraltar, there was the outline of a book.

002. Can you tell us about Fleming’s experiences on the front line during the war?

It is often said Fleming spent most of the war behind a desk, which he did, and only saw action once from the pitching deck of HMS Fernie during the ill-fated Dieppe raid in August 1942, while trying to watch his creation, 30 Assault Unit go into action for the first time. 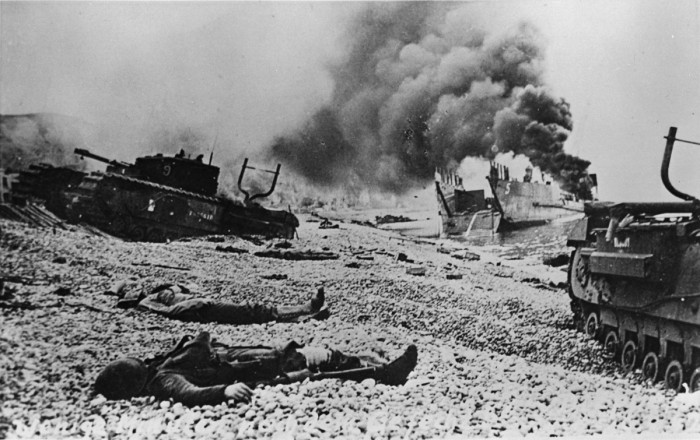 The Dieppe beach after the raid.

Not true as two years before, during the fall of France, Fleming was sent to find Admiral Darlan commander of the French Fleet by his boss Admiral Godfrey at NI and told to stick with him. At the time Churchill and the Admiralty were extremely concerned over the fate of the French Fleet. Thus he got caught up in the retreat south of French and British troops and refugees often being attacked by the Luftwaffe.

He also became involved in Operation Aerial the evacuation from the Bordeaux area where 190,000 allied troops were taken off, and there are several eyewitness accounts in the Imperial War Museum of people seeing him in the thick of the action there. Unfortunately his Darlan mission was largely a failure as nobody could get a straight answer about the fate of the French Fleet from the wily admiral, which resulted in the tragic action of the Royal Navy, sinking the French Fleet at Mers-el-Kebir near Oran in North Africa. 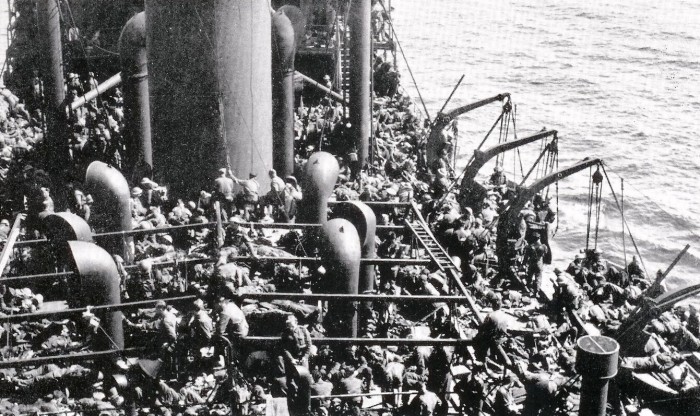 003. Could you briefly summarise what Operation Golden Eye was?

Operation Golden Eye was a stay-behind sabotage and disruption scheme to be implemented should the Germans have moved into Spain. It was sub-divided into Operation Sconce if the Spanish co-operated with the Germans and Operation Sprinkler if they resisted. There was a similar scheme Operation Panicle for Portugal.

004. How important was Ian as liaison between the NID, SIS, and SOE?

Ian at Merrimoles, in uniform

Fleming was vital in that role. In the early days of the war SIS was in turmoil, after the death of its director Admiral Sir Hugh Sinclair in November 1939 and some operations went badly wrong. SOE was in its infancy only being formed in July 1940.

NI oversaw both organisations on the Iberian Peninsula, as indeed NI had run intelligence in the same area in WWI. Fleming, and for that matter Alan Hillgarth, Naval Attaché in Madrid, often had to intervene in squabbles between the two.

005. How did some of these Operations such as Golden Eye, Felix, and Tracer influence Fleming’s stories?

Golden Eye clearly, I think, was the starting point for ‘Casino Royale’ taken from Fleming’s times at the Casino in Estoril Portugal that at the time was frequented by Allied and Axis agents. Also re-reading CR for my book, the attempt on Bond’s life by the two Bulgarians in Chapter Six who bungle it and blow themselves up, leapt off the page at me. 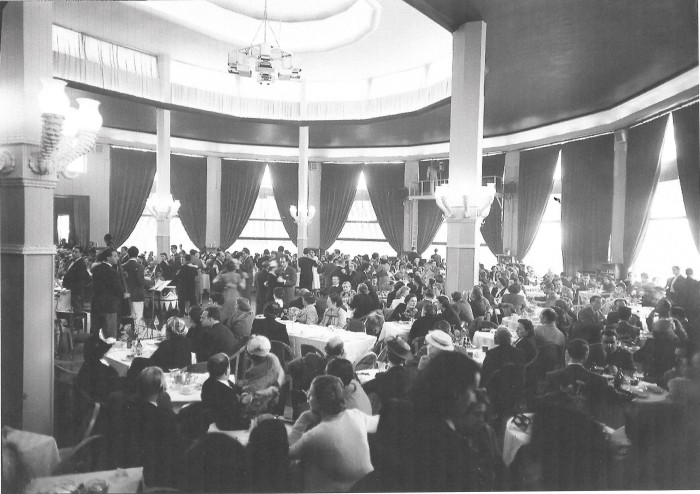 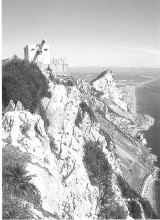 Lord Airey Battery Rock of Gibraltar near the entrance to Operation Tracer’s hide.

In research for one of my previous books, ‘Agent Cicero’ the story of Elyesa Bazna an Albanian Turk, a valet at the British Embassy in Ankara who spied for the Germans, I came across the attempt on the German Ambassador’s life. Two Rumanians in the pay of the Russians tried to assassinate him but blew themselves up.

Even the details are the same with pieces of the assassins hanging from trees. News of this would certainly have crossed Fleming’s desk.

There are surely elements of Operation Tracer in Dr No’s island where his base has been tunnelled into the island like the tunnels in the Rock of Gibraltar. ‘Thunderball’ was inspired by the exploits of the Italian divers of XMas who attacked Allied shipping in Gibraltar with two man submarines.

Indeed I would say all Fleming’s Bond books are influenced in some way by his WWII experiences. 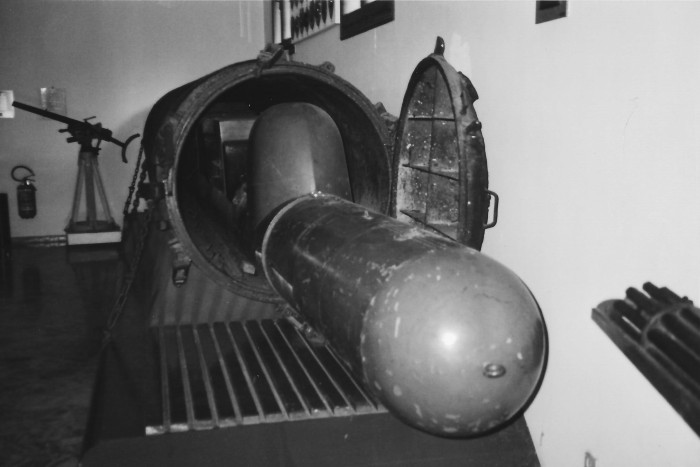 Italian two-man sub known as a Maiale (pig) due to being difficult to steer used to attack Allied shipping in Gibraltar. Here inside its carrying pod this was strapped to a conventional submarine.

006. You live in Cornwall. Can you tell us about any connections Fleming had to Cornwall and a bit about your novel Room 39?

Yes it is a blessing to live in such a beautiful county. Fleming came to Cornwall several times as a boy on holiday with his family. On one visit he met Ivar Bryce who became a lifelong friend. Exploring the caves and creeks of the Cornish coast I believe fuelled his love of the buried treasure stories. Sometimes the Flemings stayed at the Tregenna Castle Hotel in St.Ives which is still operating today. In later life he sometimes came to Cornwall to play golf another of his passions. 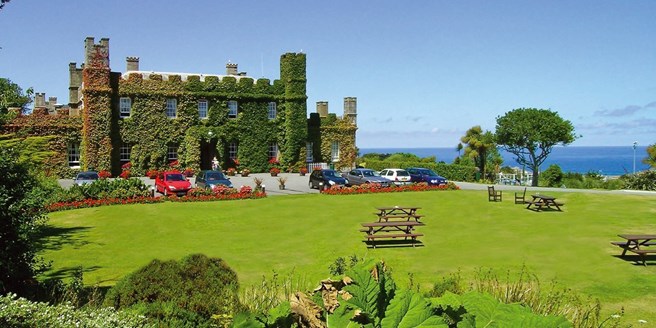 My novel ‘Room 39 and The Cornish Legacy’ was sparked by my wife Margaret saying ‘why don’t you write something about Cornwall.’ The hero Rob Nicolson, a former Royal Marine Commando, inherits his Aunt’s house in Cornwall in 1984, in which he finds her diary about her service in NI during World War II, in which Ian Fleming makes a cameo appearance. Rob finds out his Aunt was murdered which eventually results in him working reluctantly for MI5. A second Rob Nicolson adventure ‘Nicolson’s Gold’ was published in 2017, and a third ‘Nicolson’s Flamenco’ is in the pipeline.

007. Tell us why one of your dedications in the book, is to the late John Gardner?

Although I never met John Gardner his work has been a great inspiration to me. I loved his Boysie Oakes novels, really good laugh out loud stuff, and in a way they inspired my own reluctant hero Rob Nicolson.

He also did a fine job writing the 007 books after Fleming. And of course, like me, he was a former RM Commando. 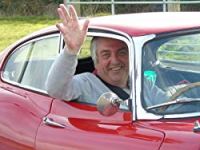 Mark Simmons is a writer of espionage books fiction and non-fiction and comes from a family with a long tradition of service in the Royal Navy and Royal Marines. In the 1970’s he served in the Royal Marines Commandos after gaining his Green Beret he was drafted to 40 Commando seeing active service in Cyprus. Later he served in 3 Commando Brigade, and with the Commando Logistics Regiment. With the Regiment he took part in the Belize emergency of 1977, and served on detached duties with 42 Commando, the Mountain & Arctic Warfare Cadre, and 36 MAU of the United States Marines. 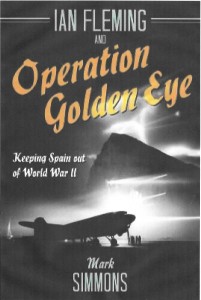 His new book tells the story of the various Allied operations and schemes instigated to keep Spain and Portugal out of WWII, which included the widespread bribery of high ranking Spanish officials and the duplicity of Admiral Wilhelm Canaris, head of the Abwehr.

Ian Fleming and Alan Hillgarth were the architects of Operation Golden Eye, the sabotage and disruption scheme that would be put in place had Germany invaded Spain. Fleming visited the Iberian Peninsula and Tangiers several times during the war, arguably his greatest achievement in WWII and the closest he came to being a real secret agent. It was these visits which supplied much of the background material for his fiction – Fleming even called his home on Jamaica where he created 007 ‘Goldeneye’.