Bond websites pop up all the time but very few provide a truly original take. Step up Matt Bunnell who has set about mapping various geographical routes from the novels. Here Matt tells us how he does it.

How did you get into literary Bond and what are your favourite novels?

I have been a Bond fan since I was 6 years old and watched a recording of Live and Let Die on home video. I guess reading the books was a natural progression although not until I was about 13 when I borrowed From Russia With Love from the local library and was hooked. I remember feeling like a fly-on-the-wall when the plot against Bond is hatched by the Soviet spymasters in General G’s office .

On Her Majesty’s Secret Service is another favourite of mine and he scenes with Draco and the escape from Piz Gloria are among Fleming’s best work. The combination of Switzerland and skiing seem to work so well for a Bond novel.

I also have a soft spot for Moonraker – this was the novel that actually inspired the map project. I was re-reading the book and tracked Bond’s driving route between London and the Kent coast on my laptop. I have always been interested in maps and it was amusing to identify the location of Drax’s house on Ebury Street and note that Fleming had placed the Moonraker launch site on Walmer & Kingsdown Golf Club, just down the road from Royal St. Georges (aka Royal St. Marks). Fleming was of course famous for the attention to detail in his novels but up to that point I hadn’t realised how accurate the description of the locations were.

How do you go about researching your maps?

When I started the project, I took each book in turn and wrote down every location that was mentioned, no matter how insignificant. I then started to plot the locations using Google My Maps using different coloured pins for each book. Mapping the first few hundred locations was fairly easy, especially in cities like London and New York where there is a lot of historical information online and in libraries but other places are much harder. For instance, placing the Pipe of Peace and the Royal Bank of Canada on Bay Street, Nassau (they were actually located opposite each other) involved trawling through a lot of old photographs online and matching them up with the partial, current day information on Google Street View.

Clearly, the world has changed considerably over the last 60 years and current maps are not always a reflection of how things were in Bond’s time. I have found the historic maps at the National Library for Scotland (maps.nls.uk) and The University of Texas at Austin (maps.utexas.edu) to be an invaluable source for seeing how places would have looked in the 1950s and early 1960s. These also allowed me to more accurately plot Bond’s tailing of Goldfinger through France, a country where many roads have been renumbered since Bond’s time.

Separating fictional locations from real life ones has been a challenge. 2 minutes on the internet tells you that  44 Kensington Palace Cloisters and 450 Charing Cross Place are not real places in London but it takes longer to find out that there was no Maidstone Police shooting range (Kent Police use one in Gravesend) and that Silberstein, Dr No’s New York stamp dealer, was probably a Fleming creation.

For a bit of fun I also created a map of the London Bond locations in the style of the Underground Map. Initially this started out as a bit of fun but turned into quite a time consuming process and made me appreciate the work of Harry Beck, the creator of the original tube map.

At times it has been quite hard work, particularly the time researching and plotting the Orient Express train route and figuring out Bond’s route around Harlembut I hope that this project will help Bond fans get a bit more enjoyment and insight when reading Fleming’s novels.

What future maps do you plan on creating?

The Google map is the main focus of the project and it probably 80% complete right now but I still have a long list of locations I want to find. My “to do” list includes 3½  Love Lane in Savannah la Mar, the Street of Books in Istanbul and the Muhamet Ali casino in Cairo. I would also like to add photos and book references to each of the pinned locations.

Recently, I have also started some work on recreating a map of Crab Key using a mirrored outline of the island of Inagua in the Bahamas, which was Fleming’s inspiration for Dr No’s retreat. I would also like to find a better way of illustrating the movements of the Disco Volante during Thunderball so maybe look out for some more moving maps like movie showing the path of the Moonraker rocket launch.

Do you plan on following some of your maps in real life?

I have been to quite a few Bond movie locations over the years with the highlights being Khao Phing Kan (Scaramanga’s Island) in Thailand and Shilthorn (Piz Gloria) in Switzerland.

Istanbul has many locations for both literary and film Bond fans and I was fortunate enough to stay at the Pera Palace hotel, the inspiration for the Kristal Palas in From Russia With Love. Fleming himself was a guest here and you can see his photograph on the wall in the bar. My visit to Istanbul also helped to work out the route that Kerim & Bond took to get from the Hippodrome Square to Krilenku’s hideout. 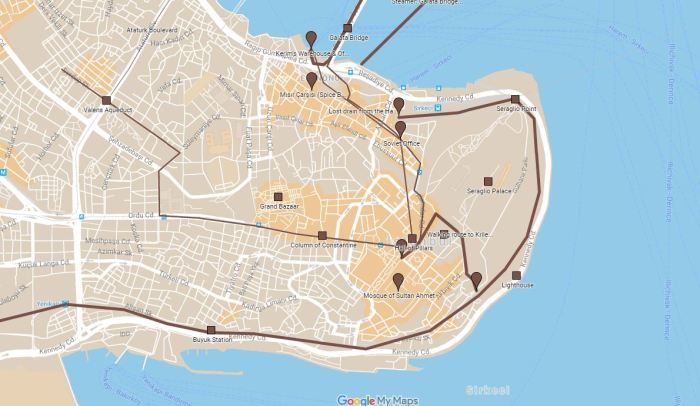 I think a trip to the Bahamas would be the ultimate trip for me and it would be amazing to explore this area in my very own Disco Volante. First I just need to check out the location of the Leopoldo Rodriguez shipyard in Messina to enquire about ordering my very own Aliscafo…

Bond fan Matt Bunnell has created an online map of over 850 locations and travel routes featured in the Fleming Bond novels. The Google Map can be viewed here and Matt’s findings and other map related goodies are showcased on his blog at bondmaps.blogspot.com.

One thought on “Mapping Bond: A Geographical Tour of Literary James Bond”