Casino Royale stands out as among the best of all the Bond novels and often assumed that it created the narrative template for the series. It certainly laid the ground and introduced Bond to the world but it can be argued that it does not conform to the familar conventions that Ian Fleming developed over the series. O.F. Snelling somewhat controversially suggested that:

“I should think that Casino Royale caught on and paved the way for further Bond adventures on as much as two or three fascinating chapters in the middle as on anything else , sex and sadism included.”

This is where the riveting but flawed second Bond novel – Live and Let Die – requires closer inspection. 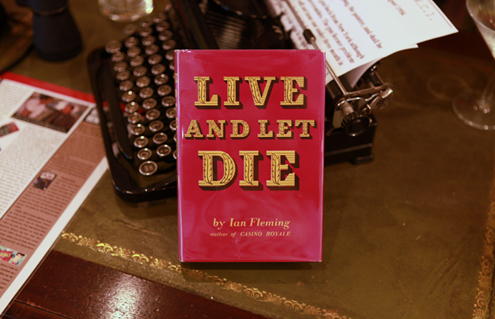 Andrew Taylor in his introduction to the Vintage Edition paperback of Live and Let Die holds this view:

It’s the first of Fleming’s books to use what was to become his classic formula. Bond is sent to an exotic location to deal with an amoral and physically unusual villain with limitless wealth and a superhuman lust for power. A beautiful woman serves as both plot device and trophy.

From a literary perspective, Fleming’s novels have received a delayed favorable critical appraisal. Someone that helped change this perspective was literary critic, semiotician, and author Umberto Eco who analyzed Fleming’s novels, giving them attention in academic literary circles with his “Narrative Structures in Fleming” in The James Bond Phenomenon: A Critical Reader.

The [Bond] novel, given the rules of combination of oppositional couples, is fixed as a sequence of ‘moves’ inspired by the code and constituted accordingly to a perfectly prearranged scheme

He put the basic James Bond film or novel into nine basic steps; of course we should make mention of The Spy Who Loved Me, the anomaly in the Bond canon; written from a female perspective with Bond not showing up until halfway through. The short stories also do not fit snugly into Eco’s theory but this was precisely the point of Fleming writing them.

1. M moves and gives a task to Bond
2. Villain moves and appears to Bond (perhaps in vicarious form)
3. Bond moves and gives a first check to Villain or Villain gives first check to Bond
4. Woman moves and shows herself
5. Bond takes Woman (possesses her or begins her seduction)
6. Villain captures Bond (with or without Woman, or at different moments)
7. Villain tortures Bond (with or without Woman)
8. Bond beats Villain (kills him, or kills his representative or helps at their killing)
9. Bond, convalescing, enjoys Woman, whom he then loses
(Eco 1979, p. 156)

This hook-laden structure was given the name “The Fleming Sweep” by Kingsley Amis and Raymond Benson felt that the “Fleming Sweep never achieves a more engaging rhythm and flow” than in Live and Let Die.

Fleming discussed the pacing of his novels in the 1964 Playboy interview.

I’m too interested in surface things, and I’m too interested in maintaining a fast pace, in writing at speed. I’m afraid I shouldn’t have the patience to delve into the necessary psychological introspection and historical background. But in the end, I must say, I’m very happy writing as I do. And I greatly enjoy knowing that other people, quite intelligent people, find my books amusing and entertaining. But I’m not really surprised, because they entertain and amuse me too.

This all seems pretty straight-forward but there was something else in Fleming’s writing that defined his style and added extra layers of enjoyment. One of these layers is the obsessive attention to detail and a sort of Meta-branding of objects and places.

Fleming takes time to convey the familiar with photographic accuracy, because it is upon the familiar that he can solicit our capacity for identification. Our credulity is solicited, blandished, directed to the region of possible and desirable things. Here the narration is realistic, the attention to detail intense, for the rest, so far as the unlikely is concerned a few pages suffice and an implicit wink of the eye.

Christopher Hitchens add that the insider finesse “was an essential constituent of his credibility and helped to mask the plot weaknesses past which he hurried the reader.”

Also the travelogue aspect of the Bond novels that Fleming enjoyed so much, was fully evident in LALD as we are taken on a tour of Jamaica, Harlem, Tampa and St. Petersburg, Florida. A prelude perhaps to his Thrilling Cities collection as Raymond Chandler told Fleming:

“Some of your stuff on Harlem in LALD and everything on St. Petersburg Florida, seems to me quite amazing for a foreigner to accomplish”. 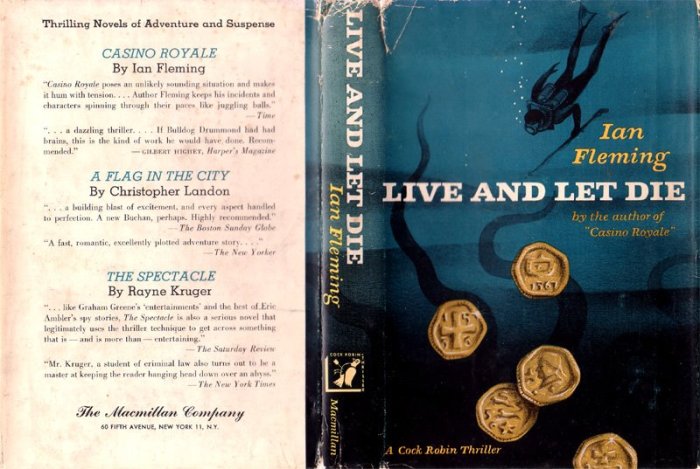 Even before the book was published, William Plomer upon reading the LALD manuscript said:

The new book held this reader like a limpet mine and the denouement was shattering … If I’m any judge, this is just the stuff – sexy, violent, ingenious and full of well-collected detail of all kinds.

Fleming had few expectations for Casino Royale when it came out, but after its initial success he knew he was onto something and was much more excited about the potential of Live and Let Die. He had written his second novel for purposely with thrills, exotic locations and sex with a view to a strong sell.

When asked by Playboy in 1964, if he wrote unashamedly for money – Fleming admitted as much:

“There’s a great deal of violence and sex in all great novels, so I dare say if I tried to do it in the modern vein I might conceivably succeed.

But I’m more interested in action than in cerebration, and I should think that the great War and Peace thriller would be more likely to be written by a man like Graham Greene or Georges Simenon, because either of them would do it more truthfully and accurately than I ever could. I enjoy exaggeration and things larger than life. It amuses me to have a villain with a great bulbous head, whereas, as you know, they’re generally little people with nothing at all extraordinary-looking about them. Then, too, I’m afraid I shouldn’t be able to write in sufficient depth to make this hypothetical thriller stand up as a classic.”

The novel when published sold out but it fell foul of some social and political viewpoints. It was even banned in Ireland. In America, how Fleming handled race is a controversial to say the least, but   his fascination with African-American culture and where it was headed overtakes the notion of overt racism. Fleming’s more lazy remarks on race, say in Goldfinger, grate much more than here.

More to the point of this article is that the effect it has on the narrative comes off too anthropological and slows down the plot. This tendency to go ‘off-piste’ when the mood took him, was none more so than when he quoted 5 pages verbatim on Haitian Voodoo, from Patrick Leigh-Fermor’s ‘The Travellers Tree’ – again to the complete detriment of the plot; it does provide modern day readers with a pleasant surprise that almost seems avant-garde.

Later, in white short and dark blue trousers, he went into the sitting room, pulled a chair up to the writing desk near the window and opened ‘The Travellers Tree’ by Patrick Leigh-Fermor. This extraordinary book had been recommended to him by M.

‘It’s by a chap how knows what he is talking about’, he said, ‘and don’t forget that he was writing about what was happening in Haiti in 1950.’

Candia McWilliam commented on this:

I find the voodoo passages almost too chilling to read, as though they will bring about harm. that is some authorial force. He has great fun with arcana of ichthyology. In all of the books, he sees off boredom with facts, but they are not ever there for padding.

Facts with movement, that’s hard to do, but Fleming does it, time and again. It’s the adventurer in him, his brother Peter in him too, perhaps.

O.F. Snelling in his 007 James Bond: A Report followed a similar theory:

The first book was good, but now, on re-reading all of them, it is apparent that Ian Fleming was merely serving an apprenticeship with that initial essay in sensational fiction. This second book is far superior in characterizations, in pace and in excitement […] I believe that his Harlem chapters in the book are some of his finest. ‘Seventh Avenue’ and ‘Table Z’ , while not entirely necessary to the atmosphere, his handling of urban negro dialect is, to me, completely convincing.

These ‘flaws’ in the sweeping narrative undermined LALD unfairly, but it proved that not only could Fleming create convention, he could also get away with flouting it.